Oh, Far Cry 2! What to say about Far Cry 2? I’ve been struggling to sit down and write this game log much more than most. It’s not because I don’t have a lot of thoughts and opinions about the game but more because none of them are extremely well-formed or otherwise decisive at this point. Let’s just do this off the cuff.

To start off with, I never played the original Far Cry. It was definitely a bit of a staple of PC gaming during its heyday but I somehow (narrowly) avoided buying and playing through it. When Far Cry 2 was announced I thought it looked absolutely awesome – a very forced first person perspective which looked particularly unique in respects to interactions with NPCs. Conversations with other characters and buddy rescues immediately spring to mind as scenes I saw in previews that looked extremely intriguing to me, as did the overall gritty look of the game. When it was finally released there seemed to be quite a bit of disparity in reviews and opinion in general, with most people ranking the game as fairly mediocre despite a lot of critics praising it, especially in hindsight. Some such critics are the cast of one of my favorite gaming podcasts, Idle Thumbs, whose unanimous love for the game became one of their more infamous, self-referential in-jokes. This was probably what pumped me up the most about finally pulling the game out of my backlog… to see if it lived up to all of the hype. 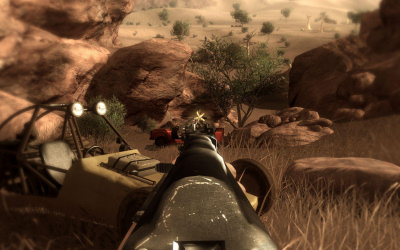 “This exact scenario will play out at least 300 times in the course of the campaign.”

So what is it? Well, Far Cry 2 is an open world first person shooter set in a fictional civil war torn African nation. It’s a damn oppressive place for sure. You play as a mercenary who gets stuck in the country and ends up finding himself having to perform jobs for various factions in an attempt to gather the resources to somehow find a way back home. Honestly, that description of the plot is probably making it sound much more narrative driven than it actually is. For the most part the story barely matters. The aforementioned oppressive setting though, that matters! It matters because the game is oppressive in nearly every other way as well and that is perhaps its most standout element.

This has got to be the most purposely unfriendly game I’ve ever played. Some of the design decisions are quite interesting to dissect as, being a modern FPS and not one that is particularly concerned with tactics and realism, many of its systems are quite friendly relative to older games of the genre. This just serves to highlight the contrast of its more notable design conceits: your character starts the game with a crippling case of malaria which you end up dealing with for the rest of the campaign, ammunition is limited, weapons suck and even the good ones you purchase wear out quickly and start jamming at inopportune moments, you’ve got to travel fucking everywhere which is made more difficult by the fact you need to stop to fix your vehicle any time you take more than a tiny bit of damage to it, oh, and virtually everyone in the world seems to put an oddly high level of priority on killing the shit out of you, and ohhhh yeah, they respawn too! That’s just a taste. The interesting thing is, having some vague idea of what the game designers were going for here, I kinda liked it! 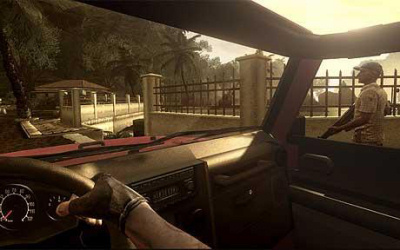 “First person driving, get used to it!”

Sure, the massive travel distances for virtually every task were a huge bummer, and the fast travel points (which I used constantly) seemed almost purposely placed at equally inconvenient locations. That, and the frequency at which you encounter blood thirsty, incredibly determined enemies while traveling and the fact they do indeed respawn also felt more than a bit overwhelming at times, but otherwise? Bring it on. I enjoyed how the game made my character, and in turn me as the player, feel, well, not that special. You get dumped into this dangerous place and expect to be mowing everyone down and treated like some impervious god of war? Nope, not here buddy! You’re just a guy, and your experience as a mercenary isn’t enough to mean you’re safe when you’re facing 5 guys with light machine guns and satchels full of grenades when all you have is a rusty pistol and the cover of an old shack to protect you. While I don’t think this whole arrangement quite works as intended, when it does all click it creates some wonderful emergent moments that don’t feel exactly like any other game I’ve played. Here’s a taste:

An end of chapter mission (and one of the more structured ones, I’d say) has you having to assassinate a high ranking officer in his mountain top compound. Knowing I was at a pivotal story mission I poked around online trying to figure out how long it might take me to complete so I’d know if I could squeeze it into an already busy night and ended up a watching someone basically speed-run through the mission by sneaking to a rare sniping position, picking him off from afar undetected, and then making a brilliant dive off of an adjacent cliff into the river below. Given that the alternative involved a lengthy firefight against numerous enemies I decided to try this guy’s method. 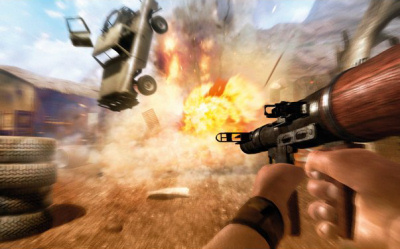 “You can practically feel the explosions, especially when you get nailed by debris.”

I stole a riverboat near Pala and made my way all the way up north to Goka falls retreat at Mt. Thabamolaetsa, pulling onto land just outside of the compound’s docks to take out a few patrolling enemies from afar with my newly acquired dart rifle (a silenced sniper rifle, basically.) After that I carefully worked my way up the mountain to avoid alerting any of the guards to my presence. Unfortunately I completely fucked this up, as I found myself in totally the wrong spot on the opposite side of the mountain and ended up in a smaller but still protracted firefight regardless. Whatever, I survived and took up the appropriate position to finally snipe the officer and dive to victory. Only, not having done much leaping around in this game, I completely miscalculated my jump and instead of a beautiful James Bond like escape, I hit the ground below in a hilariously violent moment of sheer failure. A literal laughing out loud moment of ridiculousness. To compound it, somehow the buddy system kicked in and despite being extremely dead from this brutal face first dive hundreds of feet off of a cliff, my buddy showed up to revive me and drag me to “safety” and I completed the mission successfully, adding a hilarious “WTF?!” moment to my already brilliant death. Perfect!

Really, probably my biggest complaint about the game would be its length. I more or less got it when the game reached its half way point. It could have ended there, or maybe gone just a tiny bit longer, though instead it tosses you into a whole new map with a whole new set of almost identical objectives and missions to tackle. *grumble* At least it all went by a little more quickly at that point since I pretty much knew what I was doing. 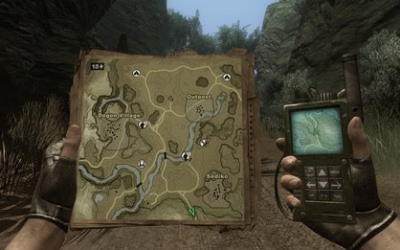 “Even just looking at the map means you might get shot in the back or accidentally drive off of a bridge.”

Continuing with the negatives, the infamously jilted dialog and the (in my opinion) ineffectual story didn’t detract too much from the game but were definitely notable. While I mostly enjoyed the weapon and combat feel it didn’t seem quite varied enough, especially given the open world nature of the game. Further on the “eh” side would be the buddy system, which while unique and interesting at first, and certainly somewhat provocative, eventually grew to feel completely tiresome and unnecessary to me towards the end of the game.

All of those negatives and still I’m saying I liked it? Sure! The parts of the game that do work and are fairly unique really feel like they make the game something special, especially amongst triple A games. The weird, oppressive setting and equally oppressive gameplay systems, the gritty, immersive forced first person perspective that helps draw you in, the uncommon and beautifully rendered African wilderness you get drawn into, the minimalist and often in-game-world UI which lends at hand there as well, and on the perhaps more shallow side, the bizarre but often compelling fire propagation system, all deserve nods. There are other things I enjoyed as well such as the health/healing system and the utterly epic explosions but those are the most standout. I’m actually very much looking forward to finally playing through Far Cry 3 and seeing just how much of this game’s influence is still detectable and what systems they’ve completely scrapped. All of this when Far Cry 4 was just released? Wow, I think I’m officially a “patient gamer” these days…

Screenshots are actually from the PC version and stolen from various sites on the Internet. I actually played this on Xbox 360 for some difficult to justify reason but if this game has you at all interested you should be able to pick up a digital PC version for next to nothing and even mod out some of the annoying bits to boot!