After playing around with Nintendo 64 emulators with the intention of taking screenshots for some N64 games that I plan to review one of these days, I determined that it was finally time to break down and get a new gamepad for my PC. None of my other pads had anything akin to analog sticks – I mostly bought them with playing much older games in mind. I’m a big fan of the Xbox 360 controller and since I already have a couple I figured it would be easiest (and probably most economical) to go the route of buying the Microsoft Xbox 360 Wireless Gaming Receiver which simply let you use your Xbox 360 controllers with your PC. Looking around I quickly discovered that these receivers were in shorter supply than they used to be, some places even charging quite a bit for them. Still, I ended up finding some eStores on Amazon that had them for fairly cheap and nabbed one.

When it finally arrived I immediately recognized it as a fake – not just some other brand, but a genuine, stereotypical Chinese counterfeit. The packaging didn’t quite look up to par – while at first glance it was reasonably similar to official looking packaging, the plastic blister pack wasn’t nearly as stylized as most Xbox 360 related packs, and perhaps even more telling, it wasn’t an immense fucking chore to get into. Also despite some okay use of Xbox 360 and Xbox Live logos and branding style there wasn’t a single sign of a Microsoft logo anywhere on the packaging – not a good sign as Microsoft LOVES to crap their corporate logo all over everything they make. The unit itself looked identical to the real thing save for the Microsoft logo on the front being replaced by an Xbox 360 logo and the little holographic seal sticker on the back saying “XBHD” instead of Microsoft. Other stickers on the unit and packaging looked a little off as well. Upon closer inspection it is even more suspicious – the connect button isn’t flush and is even a little offset, the rubber “foot” ring on the bottom isn’t seated perfectly and looks a little odd, and the piece of the housing where the cord goes in wasn’t seated properly. None of these were major issues, but an obvious departure from the high quality standards that you usually see in Microsoft hardware. 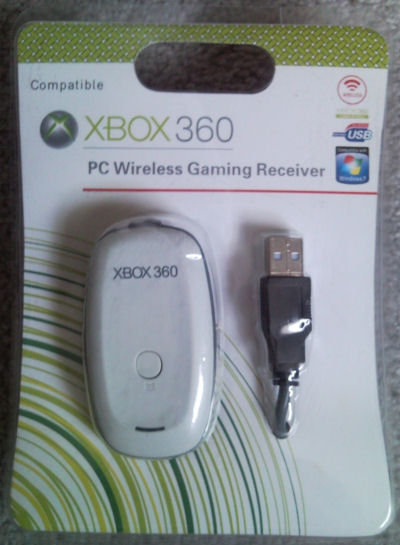 “Quite a departure from the real packaging but good at a glance.”

At first I was pissed about being duped by Amazon (who listed it as being a Microsoft product and having pictures of the genuine article) but the more I researched the more I discovered how common place these knockoff receivers actually are – they’ve been floating around for years now, presumably ever since Microsoft stopped supplying the real thing as readily. Most people have reported success with them. In fact, some people even preferred them to the genuine ones as apparently they don’t have the fuse issues the real ones have. If I complained and returned it by the time I paid return shipping and whatever “restocking” fee the eStore might have I’d probably be paying double what I paid and, I figured, if it works, I certainly didn’t pay much for it even if it is a fake. Still, I was highly skeptical – I figured though, if it were a true counterfeit and would work okay with the official Microsoft drivers I wouldn’t be putting myself in any danger by using it and, from what I read, despite some occasional difficulty in getting Windows 7 to recognize the device the official drivers worked fine with it. Still running Windows XP 32bit, I guessed I’d probably be fine.

I wasn’t about to try the software on the disk that came with it figuring that it would be some poorly written knockoff driver that would destabilize my machine, or worse yet be infected with malware (although upon further inspection the disk appeared to include the genuine Microsoft driver, albeit an older version.) I immediately grabbed the Microsoft package and went from there. Hours later, I finally got the fucking thing working. At first I couldn’t get Windows to recognize the device as being compatible with the driver, even after trying to force it to use it. Later I abandoned that version and went for the same one that was on the included disk, and although that one was recognized the driver installation would fail every time. I’ll save the gory details and get to the point – since my solution ended up being an amalgamation of various other tips rather than based on any one thing I read online, here is how I got my knockoff receiver working with Windows XP SP3:

Don’t plug it in yet – if you’ve already done so, go to your Device Manager, uninstall it, and unplug it. It depends on how far you got it, but it’ll likely show up as an “Unknown Device” with a black and yellow exclamation mark on it. It could also show up as a “USB Device” or possibly even as an “Xbox 360 Wireless Receiver for Windows”. Just look for the exclamation mark.

I hope that helps somebody out there. If the thought of dealing with shady Chinese hardware and old driver packages scares you I’d recommend trying to track down a wired Microsoft Xbox 360 controller (a Play and Charge kit for the wireless controller will NOT work) from a used game store and simply using that if you can find it for cheap, though they sell at Gamestop for about 3 times what I got my knockoff receiver for. *shrug*

Some sources:
The thread where I originally found the updated driver
A blog article troubleshooting similar problems under Windows 7 64bit

Manace comments “It works on Windows 10 x64. You should first start a cmd.exe as administrator and type: “bcdedit.exe -set TESTSIGNING on” (without the quotes). Then reboot and you see in the down right corner “TESTMODE”. This means you can install unsigned drivers.

Now got to your device manager, select the unknown device, choose update driver, select the folder where you extracted the driver package and voila!”

You can also install unsigned drivers this way.