I managed to finish Tom Clancy’s Ghost Recon Advanced Warfighter 2 (which I will mercifully refer to as “GRAW2” from here on out) over the weekend.

The game does indeed get more difficult but doesn’t quite reach the levels of frustration that I occasionally reached with the first game. I’d still have to say I enjoyed it more than the first GRAW in any case. That’s not to say I didn’t still have some complaints – indeed I did! One minor issue I had was that, while the 3rd person view looked great and even felt fine most of the time I often found myself thinking “cool, now to switch back to first person view!” Perhaps I should chalk that up to mere force of habit though. I did find myself often struggling to reload my weapon at the right times, that is, I either should have auto-reloaded and for some reason didn’t or I’d try to reload manually and wouldn’t, particularly when attached to cover. Similarly I also found using scopes when attached to cover pretty annoying as it often took several button presses to back out of scope mode back into your normal view where you could once again make sure you were in and/or attached to cover. This made using your scope more of a liability than probably intended. These issues are all most likely caused by unintentionally clunky features rather than actual bugs but either way they annoyed me often enough to note. 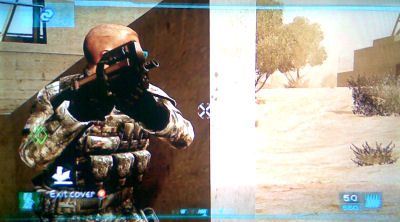 “In a startling turn of events our protagonist manages to lose his helmet! Ooooh… Ahhh!”

The ending wasn’t amazing but wasn’t too bad either. It definitely wasn’t the let down that the first GRAW ending was – after leading my group through a vicious firefight I ended up facing down a group of dozens of enemy fighters spread out along various distant walls and other cover. It seemed like a pretty tense situation as my squad mates bugged out and ended up taking cover nowhere near the fight with the exception of one particular mouth breather who was standing in the open dodging shot after shot instead of getting the fuck behind something. Jeesh. Anyway, as I tried to peer above the tiny broken wall that was somehow protecting me from the hundreds of rounds of automatic rifle fire raining down upon me I finally spot the my target – the boss if you will. I took a few potshots at him but it was far, far too dangerous considering the volume of fire I was receiving and how damn lethal shots are in the game in the first place. My target also seemed to sighted me as well and was aiming an RPG of some sort in my general direction. Not good! I hurl myself against the wall, cling to it for everything I’m worth, and… What’s this? I beat the game! It seems the dumbass terrorist leader didn’t have RPG training on his resume and accidentally shot the wall he was standing in front of. Ooops! Kind of anti-climatic don’t you think? 😀

I decided not to play through the campaign a second time on hard mode as I originally speculated I might. I didn’t whiz through the campaign quite as fast as I thought I might and my gaming time is far too precious to spend on a back to back second playthrough when my backlog is so large. I did go ahead and grab all of the single mission achievements as well as head online and install all of the free DLC content. There was a lot of that to go around too, most notably two large map packs containing mostly remakes of maps from older games. There are also two excellent sounding co-op map packs but those ones weren’t free. Not that it matters as I’ve never played a console Ghost Recon game online for various reasons. For those that feel compelled, however, this game looks like a great multiplayer value. I admit I wouldn’t mind trying it out myself, the co-op in particular, but I don’t have too many friends interested in the console Ghost Recons and I’d definitely want to avoid pick-up games on XBL with this title.

First, since I was just writing about another Tom Clancy game let’s talk about HAWX. First of all “H.A.W.X.” (High Altitude Warfare eXperimental squadron) is a fucking stupid acronym. It’s in the same genre as games like Ace Combat. I’m not really sure what you’d call that genre though – definitely not any kind of simulator. Perhaps it is a “flight action game”? Who knows. It is basically an arcadey take on a flight simulator. I’m not knocking the genre though – I’ve certainly played my Rogue Squadrons in my day. Like Ace Combat 6 before it though HAWX failed to grab me. It looked great, I love flying jets around and locking onto poor helpless bastards on the ground, but neither game was a compelling enough of an experience for me to warrant a purchase. Like Ace Combat 6 I’ll reserve HAWX for a distant bargain bin pick up, if I get around to getting it at all.

Feedback on the net on the game seems to be pretty interesting and, as far as I can tell, mostly negative. I think a lot of people were expecting this game to be a more realistic (as implied by the Tom Clancy brand, perhaps) Ace Combat. What a lot of people got, however, was a strange near future plot with warring PMC’s that sounds like something out of the Ace Combat series (accurately it brings Strike Commander to mind for me and now I’ll lose sleep tonight for making that horrible comparison) possibly even less realistic planes, and some bizarre features (“assistance” and “ERS”) that make the game possibly even more unrealistic than it might otherwise. The majority of (vocal) people seem to hate it. I found the no-assistance mode to be utter trash – it’s only benefit being that it breaks up the gameplay a bit when used. ERS mode, however, I thought was pretty nifty. I don’t recall ever seeing anything like that in a flight game before thought most posters seemed to hate the hand holding aspect of it. Overall I actually enjoyed the demo, just, again, not enough to make me want to run out and buy the thing. 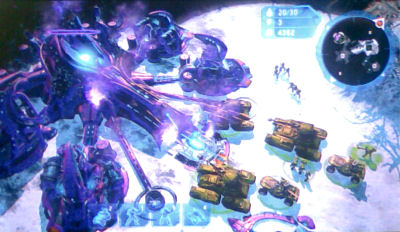 “Finishing off a Covenant base.”

Onto Halo Wars! What can I say? It’s a not-so-special RTS. It’s Halo. It’s pretty good. I’m not surprised it’s good, nor that it is such a cookie-cutter RTS given the developer which has a history of helping shape the genre. From what I saw of the demo (I played both campaign missions and a couple of skirmishes) it’s nothing too exciting. I will say that was pretty pleased with this attempt to map RTS controls to a console controller. My only issue with them was how hard it was to group units. After playing Warhammer: Battle March recently in which I was able to assign specific units to specific groups and cycle through them it felt like a little bit of a dumbing down in the strategy department. Maybe you can do it and I just didn’t run into it, however.

People will inevitably ask whether this is a good game for Halo fans that aren’t RTS players. I’d have to say yes. The game definitely oozes with Halo flavor. All of the troops and vehicles are there and, thanks to the tech trees, even have some yet unseen (to my knowledge) variations. The game’s single player campaign also seems to have a lot of story and plenty of decent cutscenes. So sure, if you’re a big Halo fan I say grab it. If you absolutely hate RTSes, however, I can’t imagine this one will change your opinion on the genre in even the slightest bit. I for one may grab it if even just to satisfy the Halo fanboy inside of me. I don’t play a lot of RTSes, especially on console, so this may be a rare purchase for me though I’ve also been eyeing Tom Clancy’s EndWar lately as well.

Err… Wow. Apparently me and Tom Clancy have a thing going on. 😉

Again, apologies for the crappy photos instead of decent screenshots. It’s the best I can do at the moment for Xbox 360 games.