For some indescribable reason I decided to further my vacation from my consoles for a while longer and dove headfirst into Diablo 3, mostly due to all of the hype surrounding the new 2.0 patch and the (then) upcoming Reaper of Souls expansion pack. First: good news, everyone! My concern in Lightsabers and Labyrinths was unfounded and Diablo 3 does in fact hold up quite well in the atmosphere department. The setting still feels very much like the grim world of Sanctuary from Diablo and Diablo 2 and even then some and the music is still great and perfectly atmospheric. The graphics, while a tiny bit cartoony compared to the previous games, actually feel ike a perfectly logical evolution of the previous style and overall look great. I had other concerns too such as hearing that they packed in much more backstory and dialog (including from your character!) than in previous games. I was somehow picturing a bunch of cheesy in-game cutscenes which would probably change the feel of the game quite a bit. Instead most of the dialog is delivered using something akin to ye olde “audio logs” and the follower interaction and plot related cutscenes that are there are mostly delivered in fairly unobtrusive ways too. 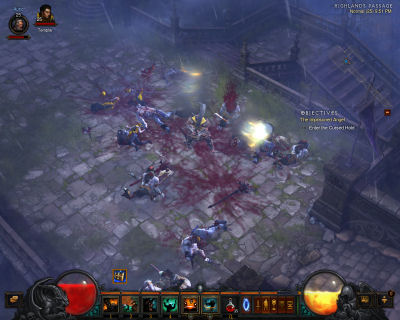 “I feel like Conan most of the time I’m playing my Barbarian. Fuck yes!”

Gameplay wise, I rolled a Barbarian and played through on normal difficulty – Barbarians being one of the simplest yet funnest classes from Diablo 2 I figured it would be a good starter character to try out and I was definitely right. If anything I could have stood to bump up the difficulty a bit. I feel like it bears stating that yes, this playthrough took place entirely AFTER the 2.0 patch which included a lot of the refinements of the earlier console ports of Diablo 3 including the apparently greatly improved loot system so I have no first hand account of how things used to be. All I can say is that what is there now works quite. I felt like loot drops were aplenty and upgrades came fairly often, at least in the first few acts of my adventure. Perhaps some of the best praise I can give Diablo 3 is that despite just playing through all of Torchlight and the last act or so of Diablo 2: Lord of Destruction, I not only managed to avoid getting burnt-out on the simple and repetitive ARPG gameplay but even somehow wound up totally addicted like I was playing Diablo 2 back in 2000 all over again.

I might as well mention the expansion since I bought it and played it inline with the original campaign and it’s still somewhat new on the shelves as of this update: it’s largely more of the same. The new zones, monsters, and events are awesome, the story, journals, items, and powers fit perfectly in with the core game, etc. etc. Really, the bulk of the biggest changes in the game outside of new content were those patched in (to everyone, expansion or not) with patch 2.0. The other big change is “adventure mode” which I’ve only briefly dabbled in so far. Regardless, it certainly seems like a better way to grind out levels and new gear than playing through the campaign for the 30th time. I think my only real surprise with Reaper of Souls is that it’s not just a straight continuation of the plot like they did with Diablo 2’s Lord of Destruction expansion. Instead it’s a new story entirely. That is, while continuing where the plot of the core game left off, it’s not just “and then a bigger, more badass demon showed up and you had to kill him too!” kind of thing. The only problem with this is that the stakes will always have to be extraordinarily high given your character’s story and the fact that you already managed to save the world from total annihilation in utterly epic fashion the first time around. Hey, if they can keep that expansion cycle up more power to them! 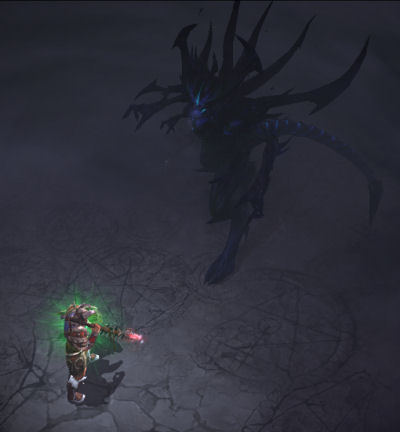 “Someone call an exterminator?”

Overall I found Diablo 3 a total fucking joy to play through – capturing what I loved about Diablo and Diablo 2, refining some of those systems, and giving a slightly deeper look at the world of Sanctuary and its lore. Sure, the story arch feels a bit of a rehash of Diablo 2 in some ways and the game is still a simple blend of remorseless clicking and inventory management, but Diablo 3 delivers exactly what caused me to be captivated by the genre in the first place and does it with the usual top notch Blizzard polish. I’ll definitely be heading back through the campaign with another class against at some point in the future, probably multiple points even. I’m ecstatic.

Blizzard also updated their… err, updater? Okay, their “launcher” recently to serve as a single launch (gah, I did it again!) point for all of their newer Battle.net games and on that list is there new free-to-play collectible trading card game “Hearthstone”. Hearthstone plays like a simplified version of the old WoW TCG which itself was highly inspired by Magic: The Gathering and its ilk. I’ve heard great things about Hearthstone from friends and on some of the podcasts I subscribe to and, being the sucker that I am for mounts in World of Warcraft, seeing the little advertisement for a special mount for trying Hearthstone out was all the extra push I needed to give it a whirl. A whirl turned into a couple of whirls and then more whirls and now hours and hours of whirls. Man, this game is fun! 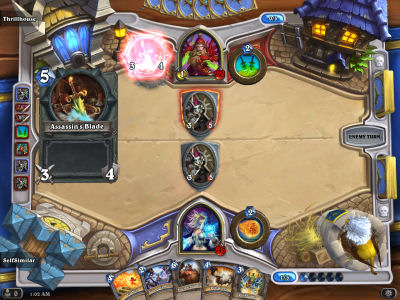 I’ve never been a TCG/CCG guy – I tried Magic out when it first hit in the 90s but it just always felt slightly too complicated to me for what it was trying to do. I also had a love/hate relationship with the whole collectibility part of it. Hearthstone, by streamlining the rules so much, really nullifies most of those complaints. The game is really fast and really easy to pick up on. Sure, there is still a “he with the most cash wins” aspect to it but I feel like the streamlining means that even the most rare (err, “epic”) cards aren’t too crazily overpowered. That, and Blizzard has the free-to-play mechanic fairly fine tuned so far so that you can pretty consistently unlock new cards without ever dropping a dime of real money. Add that addictive gameplay to some Warcraft aesthetics and some good old Blizzard polish and man, this game is rad! Given the repetitive nature of something like this I doubt I’ll play it too much more besides trying to master a coupe of more “classes” but so far I’ve really enjoyed my time with it.

Blizzard has definitely still got it. 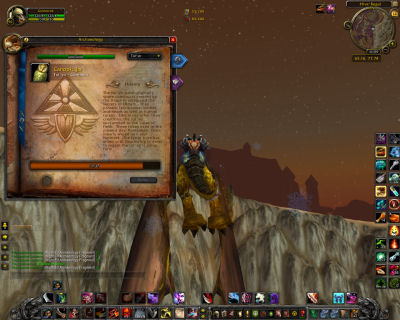 “…and I log in to immediately start grinding fucking archaeology again. Ugh!”

As an aside, yes I know I probably shouldn’t care too much about World of Warcraft mounts given that I don’t actually play World of Warcraft anymore but… *sigh* once an addict, always an addict! I loaded up my level 50 something goblin hunter the other day and played through a whole zone and actually enjoyed myself once again. I suppose I’m getting hyped back up for the new Warlords of Draenor expansion coming later this year. I truthfully barely have enough energy for the game left in me to remain interested enough to buy this expansion. I almost didn’t buy Mists of Pandaria as it was back then. The new character models and the free level up to 90, as shallow as those offerings are, help sway me. The bigger thing is probably just having to personally come to terms with what I get out of the series nowadays – a few months of hardcore addiction before I put it back on the shelf until the next expansion, and honestly that’s totally fine with me.