I finished up Battlefield: Bad Company last week. When I said the game felt easy I wasn’t being entirely accurate – while it is, no doubt, easy to overcome just about anything thanks to the overly generous healing and respawning systems the difficulty definitely ramps up as the game goes on and it can be extremely frustrating respawning and quickly dying over and over again. There were a few sections towards the end of the game where I really felt like I was being put through a meat grinder.

The last boss fight involved taking down a helicopter. I had seen multiple people claim that this fight was an easy opportunity to get the achievement for shooting a helicopter with a laser designator – those people are now my enemies. 😉 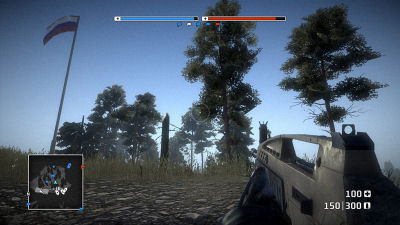 “Blah. One of the only online shots of Bad Company I could find and there’s an unprecedented lack of exploding going on in it.”

To explain the situation a little better, the laser designator requires you to hold a view on a target for a certain amount of time in order to lock the target. Once this is done you receive a satellite view of a missile dropping towards your target which you can then clumsily guide to where you want it. It works well enough for taking down, say, a tank that hasn’t spotted you yet. Taking down a helicopter that is constantly moving and launching barrages of rockets at you? Not so much. 🙂

I must have tried hitting this damn helicopter for thirty minutes or more, constantly switching between the designator and my trusty healing syringe to recover from near rocket hits, before finally getting the timing perfect enough that I could nail the chopper in one of the brief moments that it was hovering in place. Once this was done I threw down the designator and picked up a nearby rocket launcher so I could finish the job the way the game intended. Unfortunately this actually proved more difficult than I had originally imagined and I quickly used up all my ammo without taking it down. I was highly annoyed as I went back to the designator to attempt to score another one of these impossible shots to finished the deed. Luckily during the process I discovered an ammo box and was able to refill the rocket launcher and finally take down the chopper. Argh.

The ending, while setting up the potential for a sequel, was pretty enjoyable. The last shot of The Legionnaire looks freakily similar to Niko Belic. Well, Niko did say he did some bad stuff during the war, right? 🙂

I hopped into multiplayer briefly just to check it out since it has such a great reputation. The action was somehow even more chaotic than the single player game with an ever-present deadly crossfire of missiles, shells, and small arms. The environments followed suit thanks to the almost nonstop sound of booming explosions and errie visuals of the smoke plume filled sky and the rubble strewn ground. I only played about four matches and they were all of the Bad Company standard “Gold Rush” attack and defense variety. The teamwork was possibly slightly less together than what you might see in a PC Battlefield game yet I was surprised to see little if any fighting over vehicle spawns or other smacktard behavior. It seemed fun – very chaotic, but fun.

All in all Bad Company seems like a solid product – far from perfect but very solid. It was good enough to make me bump the upcoming Battlefield 1943 downloadable game up to being a definite purchase when it comes out later this year. 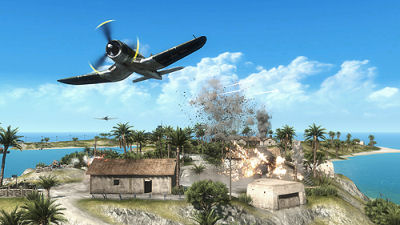 “Wake Island in the Frostbite engine? Sign me up!”

Next up in my back log will be the infamous Ninja Gaiden 2. We’ve talked about this game and other related games quite a bit on the Untitled Games Podcast which has been making me really want to dive into it. At the same time I’m a little bit wary of its legendary difficulty. While beating the original Xbox Ninja Gaiden was one of my more satisfying achivements in recent gaming history I still sometimes wake in cold sweats with visions of infiltrating the imperial city looping through my brain. Seriously, I literally completely put that game down 4 or 5 times but I loved it so much up until the different points where I got stuck that I kept coming back (sometimes months later) until I eventually made a concentrated effort to beat it. I feel kind of like I’m about to go to an amusement park and I’m really looking forward to it yet at the same time I know that the rides will scare the shit of of me.

Moving on, I also finally managed to beat Marvel: Ultimate Alliance cooperatively. It wasn’t bad although, honestly, the whole time I was wondering why they haven’t released a current generation version of the Baldur’s Gate: Dark Alliance games and wishing I was playing that instead. That being said the ending was actually surprisingly rewarding. 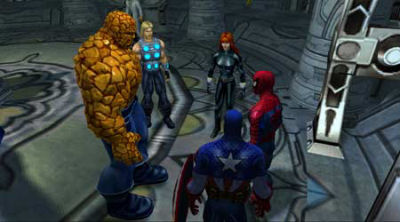 Each mission has an optional quest. Often times these felt like normal parts of the mission and we didn’t have any difficulty casually completing them along the way though there were a few that definitely felt a bit more optional or are were harder to complete. Many of these missions felt just barely related to the mission objective enough to remove any question of their purpose though I suppose this experience could be unique to people like myself who have played way too many RPGs, particularly of the MMO variety, in which completely banal side quests are dolled out constantly with little or no consequence. Regardless I didn’t suspect that there were actually major consequences for completing or failing each of these side missions, detailed at the end.

There was one instance in which we failed a mission and didn’t think we’d be able to beat it without a ton of effort. There didn’t seem to be any consequence to failing it though so we warily let it slide. We found out at the end of the game that this ultimately resulted in the West Coast being wiped off the map. Oops! Sorry, fellas!

Additionally an answer to a subplot that you might have forgotten about by the end is revealed and there are some hilarious voice overs during the credits. That’s the least I can say about the ending.

My favorite thing about the game though has got to be how humorously absurd it is as it constantly attempts to bluntly explain the origins and powers of different Marvel Universe characters and how their stories relate to each other. Now, I’m not a huge fan but I grew up around comic books and am definitely more familiar with the characters and storylines than the average Joe yet I somehow never realized how goddamn dumb most of these back stories were, especially when connected, until I played Ultimate Alliance. Good times! 😛

Oh, and how can I forget? I’ve also been playing the XBLA version of Peggle. Yeah, it’s pretty rad…