Last weekend I popped in another relatively old Xbox 360 game, Project Sylpheed: Arc of Deception. I’ve been itching for a space shooter for a long time and this one more than scratched that itch. I was highly skeptical too, given I’d heard it had complex controls and a whacked-out anime cliche filled storyline, especially believable considering that it was published by Square Enix.

What kind of game is this? Well, despite being the spiritual successor to the PC (and Sega CD) classic Silpheed it is more closely related to space flight simulators such as the classic Wing Commander series than a vertical shooter. It does make some obvious nods at the original like the design of your ship and the whole weapon outfitting thing though. Still, a space flight sim, a genre almost entirely PC centric, and almost extinct nowadays to boot, on the Xbox 360? Yep! Like I said, skeptical. 🙂 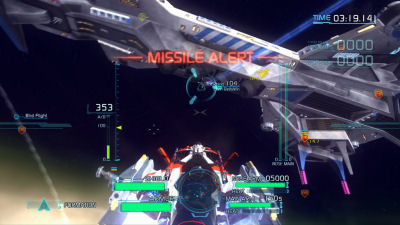 “Oddly most of the screenshots I found are from an older build with a slightly different interface.”

So the controls – a real cause for concern. They could have easily been too simple, a little too “arcadey”, losing too much of the “simulation” aspect of the genre, or way, way too complicated making them totally unsuited to a controller. Beyond all of that your fighter could have controlled like a floating tank too. Personally, I was pretty satisfied with them – after inverting my left analog stick, a quick run through the tutorial and I pretty much knew how to pilot my fighter. You can also customize your control scheme quite a bit too, if you fancy. I did have some problems though, ending with me cranking down the difficulty from normal to easy on my first run through, but once I got over that minor learning curve and started expanding and experimenting with my arsenal and developing tactics for taking down the larger ships the game actually seemed to get easier… and with that, much, much funner. Sure, those points would have probably been more welcome in the tutorial than in some crazy difficulty spike but I’m soooo glad I didn’t give in and put it down.

I really didn’t want to have to put it down either. It’s a beautiful game with a very, very “busy” look – you have a relatively complex UI that partially apes a HUD, again, owing to its sim style, you have a large amount of enemies flying around you, unlike most games in the genre, and you have a dazzling array of ship contrails, missiles, laser beams, explosions, and other effects all adding to the chaos. At first glance it looks amazingly hectic and although it can be at times once I got a grip on the game everything made sense and nothing really distracted me too much. The voice acting is… eh, okay, sounding a bit like your average anime dub. The music, while not bad, also doesn’t do much to impress. Then again it is usually obscured by weapons fire, explosions, and dialog anyway. 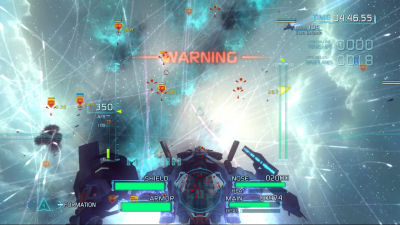 “I think the warning is due to the approximately 50,000 missiles on the screen.”

Then there’s the cut scenes – very anime inspired, and while not the prettiest CGI ever if you’re fan of anime and/or cut scenes in other Japanese games you may enjoy them. Personally, what got me was the obvious influence of some of my favorite space opera animes such as The Super Dimensional Fortress Macross and particularly Macross Plus which I appreciated to no end. Honestly, when I first saw the very Macross-like snaking missiles in the demo at a friend’s house years ago I knew that this was an immediate purchase. Thankfully much to my surprise the game’s cut scenes, dialog, and plot in general weren’t nearly as annoyingly over the top as I was expecting so unless you have absolutely zero tolerance for such things I think you’ll manage.

One of the coolest parts of the game is the ability to purchase and mount various weapon systems – some pretty epic ones too. From your basic dog fighting machine guns and the aforementioned guided missiles, you also have things like anti-ship missiles, torpedoes, dumb rockets, and even massive battleship splitting energy cannons. There’s a fair amount of room for experimentation and customization there too. Like I said, at first I really wasn’t feeling the chaotic, largely weighted battles the game constantly puts you in but once I mastered some of these weapons my fighter became a god of battlefield and I was laying waste to practically everything single-handedly. Making strafing runs against entire fleets of gigantic warships, weaving and rolling in and out of their formations, leaving huge explosions in your wake is a surprisingly addicting feeling. The game totally capitalizes on this too because all of those weapons you purchased? You can start a “new game+”, keeping them while you work on buying the rest. 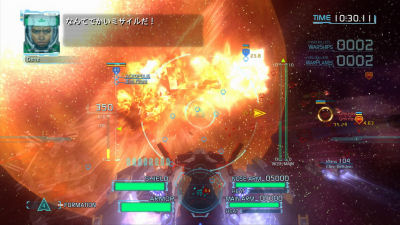 “Boooom! Destroy what destroys you. In this case, a destroyer.”

The game certainly has some shortcomings. The near constant chattering of your wingmen and even opponents can be a bit over done and even a little random, especially when it’s hard to make out over the effects half the time. Some of the (thankfully optional) side mission objectives are beyond esoteric even in the rare instances when they actually get pointed out to you. This ties directly into my comment about the battles being larger and more chaotic than most in games like this as I definitely feel like the mission/scenario design could have used a little more tweaking. One of the most damning things is the fact practically all missions and sub-stages have a time limit which is damn bizarre for this type of game. Sometimes it relates directly to your objective and therefore makes some sense though at other times it comes totally out of left field. Still, I don’t believe I ever failed a mission due to the time limit even if I did come incredibly close a couple of times. No, the real pisser here is that when you die on a mission you can automatically restart at the last sub-stage you were on (which is usually a pretty good checkpoint) but by doing so you lose all of your previous kill credits which will no doubt cause you to score a much lower ranking and therefore greatly reduced points to spend on weapon upgrades. This kind of makes doing badly a bit more punishing than it feels, creating a potential vicious circle of dying due to having crappy weapons but not being able to upgrade them due to dying. Whoops!

Anyway, I got over all of that shit. I mentioned that “new game+” feature? Yeah, I started a new game back on normal immediately after beating the game and replayed several of the missions and I almost never do that. That’s how much fun I was having with this game! I’m pretty sure that, like the classics of this genre, this is one I’ll dust back off and replay again some day – possibly several more times! It’s just a pity that this game is relatively overlooked both by Xbox 360 owners and fans of the space sim genre… but then again this type of thing certainly isn’t everyone’s cup of tea and I’m admittedly part of what I’d imagine is a very small western demographic who both loves space sims and certain kinds of anime. Still, people apparently buy plenty of Ace Combat! *shrug*

As usual, Xbox 360 screenshots stolen. Thanks to Google Image Search for aiding and abetting!