After wrapping up Space Marine I started playing through Burnout Paradise on Xbox 360 which I had been interested in finally giving a shot for quite a while now. I’m not a huge racing fan but I Lovvveeeedddd Burnout 3: Takedown and Burnout Revenge on the original Xbox so I was really looking forward to Burnout Paradise. I tried the demo when the game was still relatively new but couldn’t really get into it too much. Still, I know that it can be hard to judge an open world game from its demo alone, so I ended up buying it anyway but shelving it while I played through some of my more anticipated games… since then it has been pretty buried in my backlog. 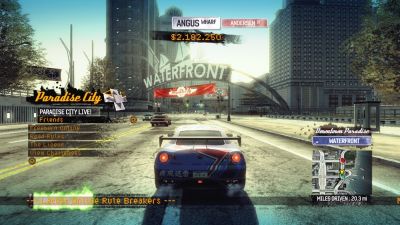 I admit that I might have missed the boat a little bit since all of my friends have long since put away their copies of Paradise meaning I wouldn’t get a great experience with the drop-in multiplayer nor all the fun to be had with the “Road Rules” score fights. Still, I hopped in, so long after the game has been heavily patched and supplemented with tons of DLC, and played through the core single-player experience. That is to say, doing races and events to unlock more cars and eventually getting to my final license as well as working to satisfy a few achievements and whatnot. The racing itself, at least after you start unlocking better cars, is the same old tight, fun, arcade racing that I love about Burnout. It took me a bit of time to get into it but once it clicked, I really found myself enjoying the hell out of it. The open world structure of Paradise doesn’t really add a whole lot to the game for me, in fact in many ways I think I would have rather had the old style tracks, and having to travel to find new events, make repairs, and swap cars is kind of a drag, but generally speaking it works quite well. 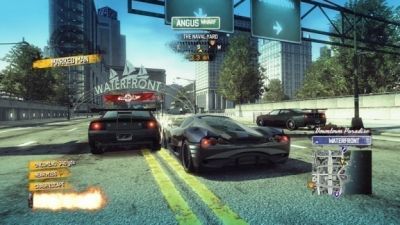 “Expect to rack up millions of dollars in property damage in your time in Paradise City.”

The removal of “Crash Mode” is sorely disappointing and the dismal “Showtime” mode is absolutely no replacement for its absence. Speaking of crashing, I wish take downs could lead to massive pile ups instead of only getting credit for the one car you take down first and then having the game more or less put you on autopilot (even leading you to avoid potential crashes yourself!) while it is showing you the wreckage. Relating to that, actually, my main complaint about the game is probably all of the oddities about the user experience – the way the music/radio system works, some of the odd little animations, cut-scenes, and screens the game forces you to watch all of the time, the map being almost useless, the fact that they had to patch in a “retry event” option and as a result it is in a semi-stupid place, etc.

Still, all this time later is it a good game? Definitely! I’m betting that if Criterion have taken some of the valuable lessons from Paradise to heart the next game in the Burnout series could very well be a total masterpiece!

(Oh, and while I didn’t absolutely hate it and some of the seemingly random music selections are pretty fun, I find the whole concept of “Crash FM” to be hilariously dumb. The more I think about it, the more absurd it is. Can’t someone from the FCC shut this shit down before DJ Atomica inspires yet another traffic related fatality? Christ!)

Per usual, screenshots totally stolen. Probably also from the PC version instead of the 360 version, I’d guess, but you get it. 😉