I originally purchased Beepa’s FRAPS back in the early 2000s to do some gaming video captures for my old clan. I put together a couple of little video promos for us, and another couple just to show friends at work, but I did relatively little with it. Keep in mind, this was all in the infancy of gaming videos, a few years before YouTube launched, never mind became popular. A part of me wishes I had kept with creating and editing videos – you could be watching this on my hugely popular, fully monetized YouTube channel instead of reading it on a seldom visited, poorly written blog right now! I digress…

Regardless, FRAPS remained a fixture on my PCs thanks largely to me starting this blog and making it one of my goals to include my own high quality screenshots depicting actual gameplay whenever possible. Most people would agree that it’s much more convenient to bind screenshotting (and saving) to a single key rather than using any of the more complicated methods of capturing to the clipboard, particularly when attempting to screenshot a game you’re actively playing. 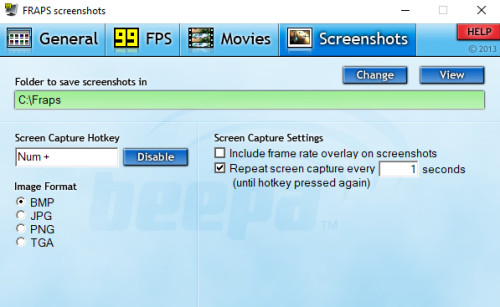 More unique to FRAPS was the ability to toggle repeating screenshots on and off. That is, instead of taking a single screenshot, FRAPS can automatically take screenshots over and over again at a certain interval. I’ve made great use of this feature to capture action rather than all of my screenshots consisting of nothing but character vanity shots and scenery. See The Tale of Garn series for a huge number of examples.

FRAPS was easy to use, very light on resources, and produced good results. Unfortunately development was never all that rapid, and suddenly slowed to a total stop in 2013. While the latest version (3.5.99) technically works in Windows 10, it doesn’t support DirectX 12. That, and it flat out doesn’t work in many games. With it falling out of favor with users, game developers have no incentive to ensure compatibility on their end either. Adding to the laundry list of issues, capture codecs haven’t been kept up, nor does FRAPS support many functions that would help keep its place as essential for today’s “let’s play” focused video producers and streamers.

In 2016 a story broke that Beepa were working on 3.6.0 which would include proper Windows 10 support. There was no ETA, just a vague assurance that it was being actively worked on. Yet, here we are in early 2019 with no new version of FRAPS nor even a single update on the official FRAPS site since 2013. It’s clearly time to move on.

Unfortunately moving on hasn’t been so easy. When searching for suggestions for FRAPS replacements, the most common responses by far are recommendations for other video capture utilities. Those popular with streamers such as OBS and Action! as well as some of the newer bundled capabilities such as Nvidia’s Shadowplay and Windows 10’s Game Bar are the frontrunners. But how many of them can do repeating screenshots? Seemingly none of them! 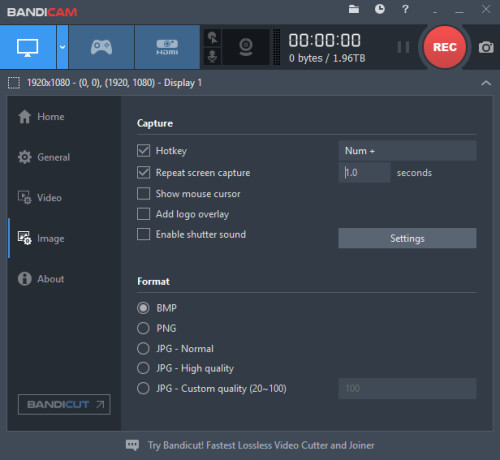 Then I stumbled across Bandicam. I’d heard of Bandicam a few times since it was released back in 2009, but didn’t know much about it. In fact, I was always under the impression that it was more for web cam use, for some reason. In reality, Bandicam seems to be as close as a 1:1 FRAPS replacement as I could hope for. Bandicam features an FPS overlay that works almost identically to FRAPS’s. Even the price and licensing schemes are very similar. It can record video in a number of formats, and it also includes some of those aforementioned “let’s play” features that FRAPS lacks – water marks, webcam overlays including chroma keying, and a separate voiceover audio channel. Most importantly, I was amazed to find that it supports screenshots with what seems like a carbon copy of FRAPS’s screenshot options screen. Bandicam is clearly gunning to replace FRAPS!

So, how’s it actually work? Well, I had some major issues with the screenshot capture. Setting the repeat screenshot to repeat every 2 seconds, I noticed that every screengrab caused the frame rate to dip drastically – dropping from 70 – 80 down to the 40s for a split second in the first game I was testing with. Obviously this caused my average FPS to be a lot lower and, more importantly, made the game feel noticeably “hitchy”. It wasn’t utterly unusable per say, but it was far from what I was expecting. With FRAPS I usually had zero indication that the screengrabs were even happening.

While I was disappointed, I don’t give up that easily. I tried different save formats, I tried saving to a different physical drive, and I tried switching to various other games in case it was a incompatibility with that specific engine, only to find my performance was either unchanged or actually worse. Out of curiosity, I tried capturing video and was surprised to find that there was only a tiny performance hit – less than 10 FPS for a high quality 1080p capture. Whaaa…?! Why in the hell is screenshotting so taxing?

As a last ditch effort I switched Bandicam from “Game Mode” (which hooks into DirectX) to the basic screen grab mode and configured it to do a fullscreen capture of just the monitor I usually game on. The result? No performance hit at all and the screenshots looked great. Well then…

The only downside of using Bandicam this way is that the FPS counter display requires that I’m in Game Mode. Almost every game these days has its own way to display the current frame rate so no big loss there, but in both FRAPS and Bandicam, the counter is also used for indicating when the program is actively screenshoting or capturing video. This is extremely useful for verification of whether a screenshotting or video capturing has been toggled on or not. That said, Bandicam does allow you to “pin” a little status bar to the top of your screen when using the basic screen grab mode which, while a little intrusive, seems like a fair trade-off. Alternatively, you can just collapse the main Bandicam window and have it on a different display. Not bad!

So there you have it – I’m making the switch! Oh, and just to make sure you don’t think I’m getting paid to shill for Bandicam, I should mention that it’s released as shareware, with the only limitations being a watermark and a 10 minute limit on videos. While this probably prevents the free version from being too useful for any serious video recording, the screenshot functions appear to be entirely uncrippled. Enjoy!

A popular video capture software that actually *does* support repeating screenshots is the well-loved Dxtory. Unfortunately Dxtory seems to be early in the process of going the way of FRAPS – support seems to be slowing for it, with no new updates in two years or so. On the contrary, Bandicam seems to be adding more and more features every few months and virtually every issue or missing feature I’ve seen people complain about has been addressed in the last year or so.