It’s been ages since I last did any serious gaming – I’ve been moving, changing jobs, and generally just very busy with other “real life” things. I’m all settled now though, so here’s a little about the last game I completed before I dive into something new… 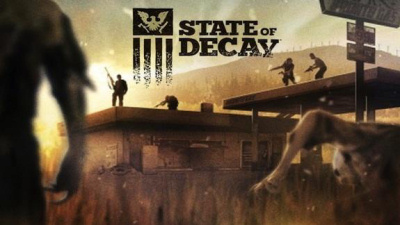 Perhaps my favorite aspect of The Walking Dead (both the comics and the TV series) is how human-centric the story is – more than any other zombie movies, shows, books, or games I’ve experienced, The Walking Dead is about the people trying to survive this radically altered world. The struggle really isn’t about the zombies, and as the show’s many, many detractors have pointed out, it’s really *barely* about zombies at all, but it’s instead against a world whose infrastructure has been gutted, where the rules of society have crumbled, and where only those who can successfully adapt, for better and for worse, can make it. Be it a nuclear war or a zombie plague, this is the key to a good post apocalypse story in my opinion. Imaging survival in such a setting is what I find most captivating about the genre. At this point there have been more zombie related games than I care to try to count but few of them even attempted to capture this essence. Instead, most zombie related games resemble the zombie movies of the 80s (even the good ones!) where zombies are simply a specific variety of antagonist that needs to be defeated. State of Decay, by Undead Labs, changes all of that. 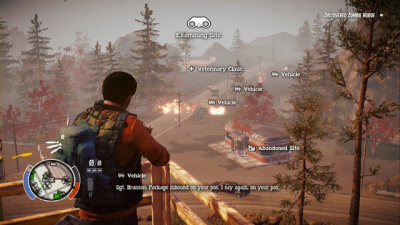 “Scouting from up high.”

State of Decay’s basic gameplay loop is what is so damn good: it’s all about that survival. In this case, “survival” simply means establishing a base where you can hole up and scavenging for enough supplies to maintain it as well as meet your character’s own individual demands. The most compelling part of this, for me at least, is the exploration involved in that scavenging or, really, anything else in this setting. While the process can become rather laborious and repetitive (more inventory room, please!) exploring and “clearing” all of these old abandoned and dangerous buildings never really gets old. There’s always a sense of creepiness as you sneak around in the dark trying to locate lootable containers, never knowing when a zombie might show up. Sure, a zombie probably won’t put you in much dangerous unless it’s one of the special “freak” class zombies, but sometimes getting mobbed by too many, in just the right way, can still put you in a very bad spot very quickly. 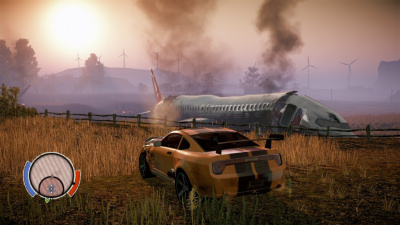 “A good pair of wheels is essential for exploration. Planes? Not so much.”

Back to the subject of establishing a base of operations though. One thing State of Decay does to make this interesting is that you don’t just play a single character. You can, sure, but you can also switch to almost any of the other survivors that are part of your enclave and play them too. The injury and fatigue systems in the game actually actively encourage it, even, as do the RPG like skill leveling and item systems. This also makes the addition of permadeath without entering into a total fail state a thing – your character can die, permanently, and the game keeps going. Speaking of keeping going, like other open world games, the world also exists as somewhat of a “simulation” with all kinds of systems in play that do not necessary tie directly into what is occurring to or around your character. More dramatically, some of these systems continue on when you’re not in game. It’s not uncommon to log in a day or two later to find that one of your survivors has died or that there are new missions waiting for you. All of these systems together alter the focus of the game from being about you killing zombies to being, like The Walking Dead, about you and your group of survivors getting by in this strange and twisted version of life. 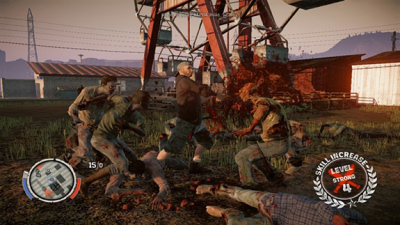 “Did I mentioned the skill system? Oh yes!”

At this point my main criticism of the game is that it really doesn’t push far enough in either direction – as a more directed, story based experience, or as a sandbox open world game where you make your own goals. I feel like most people are probably drawn more towards the open world nature of the game but the systems in place don’t really allow for a huge amount of freedom or variety playing in a pure sandbox way. More potential base locations, more possible customization of them, more variety of item and resource types, and possibly more dangers (unlike The Walking Dead, fighting other groups of human survivors is almost entirely absent from State of Decay) might go just far enough to fix this though. As it is though, it comes quite close.

I know an enhanced Xbox One port of the game came out just a couple of months ago, and who knows, I may tackle the DLC for the original Xbox 360 and PC versions someday too, but what most people seem to want from the series right now is some type of co-operative gameplay experience. At first Undead Labs were pretty loudly toting that the next State of Decay game would feature co-op or maybe even be an MMO of some sort but lately they seem a little bit more coy on exactly what their next project is. Intriguing for sure!