As a little kid I became obsessed with skateboarding thanks to my best friend’s skater older brother, who we both thought was so cool. As it goes, my friend and I spent far more time flicking through Thrasher and Transworld Skateboarding, doodling halfpipe filled skatepark plans, and pining for half of the awesome gear in the latest California Cheap Skates catalog than actually skating. Regardless, I think there was something about the whole culture that appealed to the nascent misfit rebel in me. Beyond magazines and catalogs, there were a few other outlets for wanna-be skaters. While you could only watch Christian Slater Gleam the Cube so many times, a game like Skate or Die on the NES could be played over and over again… and I did! The disappointing Skate or Die 2 was one of the only Nintendo games I talked my parents into buying me at release, in fact. 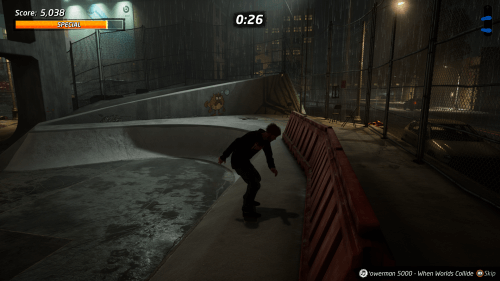 “Man, I love this new moody version of Burnside!”

In my teenage years I got into punk rock something serious, and given the association, picked up skateboarding again. Nowhere near as physically coordinated as I was as a kid, and a lot more risk averse at that, I didn’t have any luck with continuing where I had left off, but I did discover a whole new joy of skateboarding – being alone with my thoughts while trying a trick I barely understood how to do over and over again in some empty parking lot somewhere. A useful release during some pretty stressful years. Of course, I still pined over CCS catalogs, but now I could actually afford some of the stuff in them. At around the same time I had developed something of a summer vacation ritual of bingeing on the X Games late at night. Then, to complete the circle, Tony Hawk’s Pro Skater dropped. The 90s were a hell of a time!

Or should I say 2000s, because while THPS had a reputation of being more of a PlayStation-centric series at first, it was ported all over the place, and I, being a Nintendo 64 devotee at the time, had to settle for that inferior version. That’s not to say it sucked though – the core of THPS was absolutely intact, and although the fog plague every locale (in more wide open areas) and the soundtrack was fucking butchered, it was totally serviceable for us schlubs with no alternates. While I have fond memories of jamming out to the awesome soundtrack (that very much aligned with my musical tastes) and struggling through that original selection of levels, I can’t tell you exactly how much of the game I played. I mean, I vaguely recall completing all of the challenges on all of the maps, but who knows? 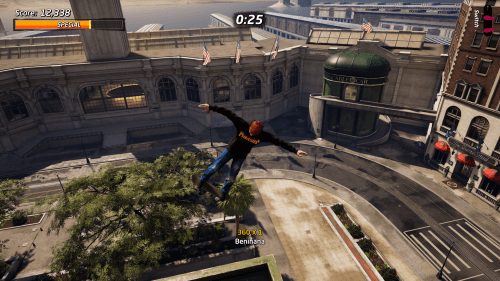 “Falling from great height (with style that is) in San Francisco.”

I have a lot more scattered memories of the series from then on – hanging out in more than one “punk house” watching friends get high and pass the PlayStation controller around playing THPS 2 and THPS 3, feeling deeply disappointed that I couldn’t play an apparently improperly burned copy of THPS 2 on my Dreamcast, that kind of thing. It wasn’t until I dove back in with Tony Hawk’s Underground on my original Xbox that I spent any quality time on a Tony Hawk game again. THUG was pretty fun, though I don’t remember vegging out on it nearly as deeply as I did with the very first game back on my Nintendo 64. That nostalgia is why I was curious about the remaster “Tony Hawk’s Pro Skater HD” which hit XBLA back in 2012, but as I wrote in this blog at the time, while it looked pretty nice, it just didn’t click with me. While I’d been tempted to check out other Tony Hawk’s titles, along with other challengers to the throne such as EA’s lauded Skate series, that was about it for me. That was, until I heard about all of the hype around this second attempt at a Tony Hawk’s Pro Skater remaster. This time with the added addition of THPS 2 levels and even some enhancements from later titles in the series. What can I say, I’m a sucker for some good, genuine hype.

And I’m happy to report that this time around the hype was real and Vicarious Visions’ remaster was a lot more successful than Robomodo had been with Tony Hawk’s Pro Skater HD. As soon as I hit The Warehouse, just like riding a bike, I was back in my parent’s living room grinding through the goal list, only with the added benefit of not having to use a fucking N64 controller. While it took more than a little practice to be able to meet those “sick score” goals, the game just immediately felt good. Real good. Of course, it only helps that the remade visuals the game received looked great as well, with obvious effort being placed into staying reasonably faithful to the originals and with a masterful attention to detail. The classic soundtracks of THPS and THPS 2 were mostly intact too, with only a few casualties, plus a huge heaping of new tracks that mostly fit in well to give the whole thing some expanded variety. 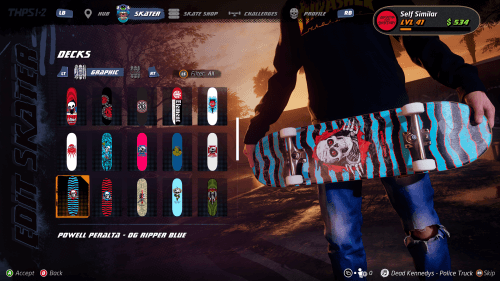 The made over visuals and expanded soundtrack are far from the only differences though. Most importantly, the trick selection has been greatly expanded. This is most notable when it comes to the additions of manuals from THPS 2 and reverts from THPS 3, which, especially when combined, allow for some insanely ridiculous combo score multipliers. Unless you’re just a natural at the game, learning to use and abuse both moves is invaluable to earning high scores. There’s plenty more too, like new goals for each map, changes to the way “tour” level progression works, the pro skaters/create-a-skater mode and the skate shop. It goes on and on, but again, Vicarious Visions did a good job respecting the original games, and that’s probably what ultimately makes Tony Hawk’s Pro Skater 1+2 so successful.

I was about half way through the original THPS tour; I had still had a few levels to unlock, most pro and sick scores were alluding me, as was anything above a bronze medal in competitions and a few of the more challenging goals, when something finally clicked. I got fully into the zone for chaining together some combos and thus spent the next week and a half or so cramming in as many sessions of THPS 1+2 as I could while I methodically went through and destroyed all of my remaining goals. When I finally beat the last one I was disappointed that the associated achievement (“Grand Tourer”) didn’t unlock. Figuring that maybe it was the one stat point I hadn’t collected yet, I dutifully went for it and… still nothing! I thought maybe it was some kind of an odd save game synchronization issue so I quit my tour and then quit out of the game. Upon loading it back up the game seemed to sit on the save synchronization screen for quite awhile, and then… my tour progress was back to 47% from 100%. Fuck! Randomly the next day my Xbox App reported that I’d earned the achievement so, hoping that Microsoft was having some kind of a weird server issue, I rushed to my Xbox to see if my progress was restored. Nope. I’m still not sure if it was a THPS 1+2 bug, a cloud save issue, or perhaps something to do with the Series X’s quick resume, but in any case I was fucking furious. Cyco Vision indeed. 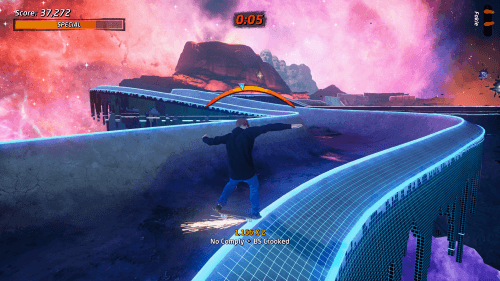 “Skate or Die… and go to Skate Heaven!”

It’s funny that one of the reasons I queued up THPS 1+2 was because I wanted another casual game I could hop in and out of randomly as I’d been doing with Star Wars: Squadrons, but my god did I forgot what a vicious hold this game can take over you. Beating both tours became an obsession. The fact that I had that save problem and didn’t immediately bail out of pure frustration speaks pretty highly to that, I think. Some of the goals are far from easy, they might even be a little rage inducing (the rooftop gaps on Downtown and the hidden tape on Streets come to mind) but it’s far from an insurmountable challenge, and soon I found myself having cleared all levels with gold medals in all of the competitions in both tours, and it all somehow felt absolutely worth it.

What can I really say that can top that? If you’re a fan of any of the original Tony Hawk’s Pro Skater games or you’re simply into skateboarding and want to play something a little different, definitely check this one out… but just to be on the safe side, you might want to get into the habit of manually saving your career (it’s hidden under the options menu, oddly) to help reduce to risk of throwing your controller through your TV like I almost did.

I got distracted while writing this and ended up watching reviews of the old Skate or Die games and clips from the old CKY videos for an entire evening. This in turn lead me to spending the weeks after watching tons of 80s and 90s skate videos and interviews with famous pros, and really, just generally fondly reminiscing about my love of skateboarding more than I have in something like 20 years. Thanks, THPS!