At long last I’ve finally gotten around to playing through Volition’s Saints Row for Xbox 360. I’d been curious about this “GTA Clone” style open world game since before the launch of GTA IV (which I’ve talked about on here numerous times) given that it was one of the first games of this type released this generation. It was also one of the few semi-well received ones at the time – it seemed like Rockstar were the only developers capable of really pulling this formula off for a while there. Volition helped change that. 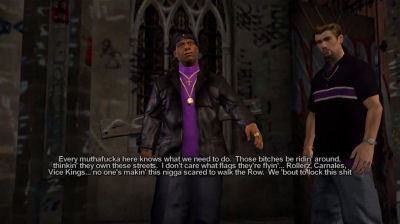 Saints Row really does feel like a GTA clone through and through though. Of course, pre-dating GTA IV and all of the other open world games from this generation, it looks and plays closer to Grand Theft Auto III and its follow-ups, Vice City and San Andreas, than anything else. It actually feels pretty odd to go back and play this now considering some of the innovations it (and later games) introduced into the genre that are now rather common place. For one, Saints Row gave us auto check points before missions and an easy retry option. It’s far from perfect however, as there are no check points for different stages of missions and some of those stages (such as driving to the place where mission ACTUALLY begins) are definitely tedious and highly skippable. Saints Row also introduces an aiming mechanic that feels more like a normal third person shooter than the janky, inaccurate, lock-on nonsense of the GTA games. Yep, gunplay in Saints Row is actually almost kind of fun! I also dug the ability to recruit followers to help gun for you – particular useful for drive-by shootings, of which I am want to participate in rather frequently.

While I’m being complimentary, one of my favorite things about Saints Row has to be the ability to completely customize your character. This has been a major component of the Saints Row series since this first game and in the sequels gets taken even further with picking the voice of your character and therefore voice actor and to a minor degree tone and script of the entire story. In this one, however, it mostly relates to designing your physical appearance and customizing your wardrobe. For comedic effect I made my character look about as close to President Obama as I could manage and later even made him run around wearing an appropriate shirt and tie ensemble. Nah, this wasn’t political commentary, I just find the image of President Obama doing drive-bys in the hood to be rather fucking hysterical. Yes, I’m a horrible person. 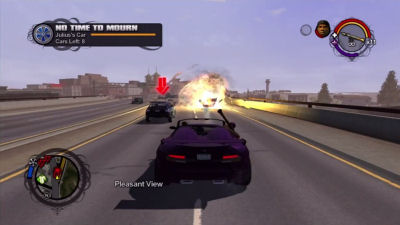 “RPGs… the real reason to own a convertible.”

As for the negatives, the entire game doesn’t quite manage to muster up anything really resembling Rockstar’s levels of wit and style. This reflects on everything, from the general humor in the world (which is often less on the clever and more on the offensive side) to the less immersive nature of the city of Stillwater. That’s not to say any of that stuff is dreadful but it’s a comparison that I feel has to be drawn. I mean, Freckle Bitches? Come on. The world they paint also tends to ride a rough line between extremely violent and almost comical – I was slightly disgusted the first time I automatically shot someone point blank when I jacked their car. Harsh. Likewise, one time I jacked some random driver and gave them a single, swift punch to the head… you know, to teach them some respect? Yeah, my purple-clad follower ran up to him and proceeded to brutally stab him over and over again with a huge fucking knife until his corpse lay crumpled on the street. Err, wow… 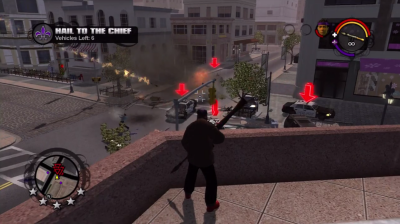 “About to fuck some shit up!”

Technically speaking, I fully expected Saints Row to be embarrassingly buggy and unpolished, especially after some of the hilarious glitch videos I’d seen on YouTube years ago. Not so much, really. I actually thought it did just fine other than occasional sometimes severe pop-in issues. I suppose this might have been a benefit of playing the game way, waaayyyy after release after it has been patched, probably multiple times, and we’re now able to load the disc image onto our 360’s hard drives for I/O gains, which I more or less always do these days. Hopefully the engine used in Saints Row 2 (which is definitely in my backlog!) is a little more capable of handling things.

My biggest complaint with Saints Row has got to be whole “respect” grinding system though. In order to start story missions you need to have your “respect” meter filled up which you can do by completing all sorts of random activities scattered around the city. The activities are quite varied and some of them are even quite a lot of fun (Insurance Fraud gets brought up a lot though the Drug Trafficking activities were favorites of mine) but still, the need to have to crank out a few of these between every mission really drew the game out and did awful things to the overall pace. I can kind of see what they were going for by making these things mandatory (forcing you to explore what would normally be optional content) and I bet the design looked great on paper, but in reality it’s all rather tedious. While I pushed through it without too much trouble several of my friends bailed out of the game early specifically because of this grind. 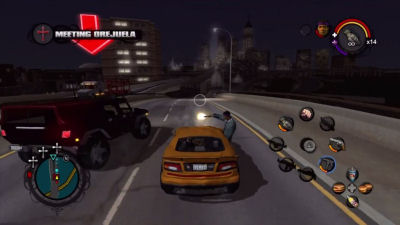 Anyway, Saints Row was fun. The story interested me even less than I thought it would and the game overall didn’t QUITE scratch that GTA itch like I was hoping for but it was certainly worth a quick visit to. If I had played it back in 2006 before GTA IV and the plethora of other “Grand Theft Auto clones” I’m sure I would have enjoyed it even more. I’ll be visiting many of those other open world games in the near future, including Saints Row 2. I can’t wait!

As usual with Xbox 360 games, I totally jacked all of these pictures. 3rd Street represent!