I sure have been slacking on updates lately. Truthfully though, it’s not because I haven’t been gaming – I was simply in the mood to play a little more Elder Scrolls IV: Oblivion after my last Garn update and so I decided to run out and pick up a used copy of the Xbox 360 GOTY version and go achievement hunting. Great plan, eh? Kind of at odds with trying to burn through my backlog though, especially with as little time as I’ve been gaming lately. 4 months later and I’m finally done. Ugh.

This was my first time playing Oblivion on console and I found playing the game with a controller surprisingly comfortable. With that, I also finally understand some of the odd choices they made with the interface in Oblivion – I always knew they were for the benefit of console players but the Oblivion interface actually works quite decently on Xbox 360. I admit it was a little odd not being able to apply mods or use the console for quick fixes but all in all it was quite a smooth experience and it was nice to play the game “pure” again considering my Garn playthrough is stacked with all kinds of mods.

I ended up rolling a female dark elf focused on stealth and archery. First, I don’t usually play females in RPGs, usually opting to make my characters rough approximations of myself, but the whole point of this playthrough was to try doing things a little differently. Likewise, I know the whole “stealth archer” path is extremely popular in the newer Elder Scrolls games but I’ve never found the idea of going with archery as a primary weapon all that appealing. Very quickly into this game my opinion changed, however. While stealthing around and doing most of my killing from afar is definitely a little slower paced, it feels much more empowering than doing traditional melee or magic builds. Stealth headshots for huge damage insta-kills are extremely satisfying though I admit I did find myself using my sword more and more as my character grew in power simply to speed things along. 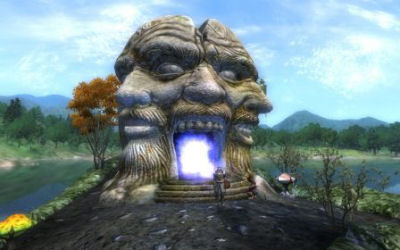 “Into The Mouth of Madness!”

I decided to play her as a ruthless (but not quite evil) assassin and brought her through the Dark Brotherhood and Thieves Guild quest lines first. I still find the Arena, Fighters Guild and Mages Guild quest lines to be rather tedious to repeat though, especially after not wrapping up the later too long ago in my Garn playthrough. It was interesting to observe that I was almost shepherded into being a semi-lawful, good character as I went through those later guilds and finally into the main storyline. By the time I was done my character didn’t quite feel like the one I had started out with and I didn’t feel like that change was all too voluntary either. Sure, I suppose I could have stolen everything not nailed down and killed random NPCs indiscriminately along the way but that really isn’t what I was going for with her. Instead I found no real outlet to express my characters “alignment” (if you will) much of the time. Ah well, I suppose that’s more Bioware’s bag than Bethesda’s.

More interesting, this was the first time I played through the Shivering Isles expansion! I enjoyed the campaign quite a bit overall though I think I’m really starting to sour on expansion and DLC packs that feel too much like separate content rather than continuations or additions to the main game content. With Shivering Isles, for instance, the tone of, well, everything about the experience really felt a little “off” after just beating the game’s main campaign. I know the expansion pack was probably intended to be played after the player had already abandoned the game for a while as sort of a “return to the game” experience and I’m sure it works much better that way. Regardless, I had fun stopping the Greymarch and who doesn’t love the mad god Sheogorath?

Well, now that all of that is over with, more Garn posts coming soon!