You know, like a lot of kids when I was young Halloween was easily one of my favorite times of year. Insane amounts of delicious, horrible candy, cool macabre decorations everywhere, and of course the costumes… oh the costumes! As an adult I still enjoy all of these things, plus we get the addition of drunken Halloween bashes and the seemingly ubiquitous “sexy” adult costumes to boot. Upgrade!

Still, for me Halloween as an adult has been largely a bust. This year wasn’t going any different so I decided to try to head it off at the pass a little bit and get back in the spirit of the holiday – watch a couple of horror movies and, hey, why not play something Halloween themed too? I could have gone with one of the numerous horror or zombie themed games out there these days but instead If decided to cross Double Fine’s Costume Quest off of my XBLA backlog. I’ve been wanting to play it since the first reviews of it rolled in and what a better time than the week of Halloween itself? 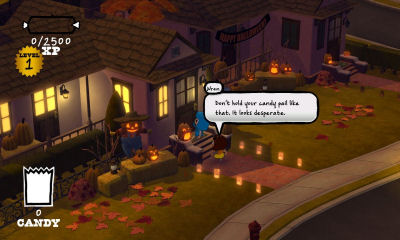 Costume Quest isn’t a horror game. It isn’t even a scary game. It is, on the other hand, Halloween… as… fuck! It’s about a pair of siblings going out trick or treating when one of them gets kidnapped by a group of monsters that seem to be in the process of a massive candy heist. The theme of Halloween night and the childhood tradition of getting really hyped about getting dressed up and scoring mountains of candy is pulled off incredibly well. Even better perhaps is the relationship your character has with their sibling – the sometimes apathetic, sometimes love/hate relationship they have with each other really adds an authenticity to the experience. After all, if you had siblings you were sharing your holidays with them, for better or for worse. The writing is great and while I suppose it is kid friendly, this is clearly a game written by adults, for adults, and it’s hilarious. 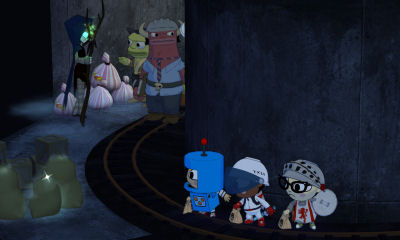 “Spying on some grubbin scum.”

The game itself is a sort of simplified take on the classic JRPG. Your party roams around in a top down “overworld” perspective talking to NPCs, collecting and searching for candy, trick or treating (of course) and doing various, simple quests along the way, all with a fun, highly stylized and cartoony presentation. The combat is fittingly styled after traditional turn based party battles, with different costumes (which are collected throughout the course of the game) granting different powers and abilities. When the fight mode kicks in the graphics amusingly shift into a more realistic, gritty style giving the player a glimpse of what the world apparently looks like in the imaginations of our protagonists. Excellent!

Costume Quest has an overall high quality, nicely polished feel to it, which is what I’d expect from Double Fine. Maybe my only complaint here would be the lack of any voiced dialog but honestly I think I’d rather read text than have these snarky kids represented poorly by horrible adult attempts at child voice acting. It’s also a nice, short game clocking in at maybe 8 hours tops which I appreciate as the JRPG mechanics would probably overstay their welcome with me otherwise. There is an expansion, Grubbins on Ice, but it didn’t really sound like it offered enough to justify extending the experience any further so I opted to skip it for now. 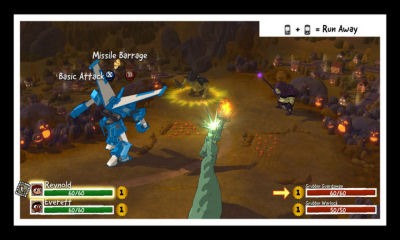 “You bet your ass I used the Macross inspired robot costume!”

With what little I’ve written here I hope you can pretty clearly see the appeal of the game. Literally every one of my friends that I’ve described it to since I started playing thought it sounded awesome and I definitely enjoyed my romp through it. Perhaps some of the best praise I can give it is that it succeeded in helping remind me of what I loved so much about Halloween as a kid and rekindle a little of that Halloween spirit. Of course, all of this delicious candy I’m stuffing my face with doesn’t hurt either…

As usual, these console screenshots were stolen from elsewhere…