It seems like it has been forever since my last game log so I guess I’ll go ahead and spout off a little about my current ventures. Other than playing a healthy amount of Oblivion with Garn, of which you should be hearing about fairly soon, the main thing I did was finally start Ninja Gaiden 2.

Ninja Gaiden 2 started off great. Despite the numerous changes since the first Xbox Ninja Gaiden game it looked and felt pretty much the same. it even seemed just as polished which was surprising given some of the reviews and impressions I had read. On the second level I ran into a horribly annoying bug, however. I received an minor achievement only to be greeted with a blade message stating that the device my user profile was stored on had been disconnected and asking me to reconnect it if I wished to have my achievements recorded. What the hell? I doubled checked my connections, eventually chalking it up as a fluke and continuing on. A short time later it came up again. Again, I ignored it and all was well. It popped up again, and again, and again. It continued popping up randomly every few seconds to every few minutes.

My (admittedly relatively brief) research into the subject lead me to believe that this was actually a fairly widespread problem which started cropping up after the first Ninja Gaiden 2 update was released. Not only did the pop up interrupt people but apparently their achievements weren’t being updated either, regardless of the status of their connection to Xbox Live. I read many theories but one of the most prevalent ones suggested that the problem was caused by particular bugged achievements and that the only fix, which didn’t sound 100% reliable, was to recover your gamertag. The only other options I had were to either either play offline or clear my 360’s cache and refuse the update (which would, in turn, also force me to play offline.) 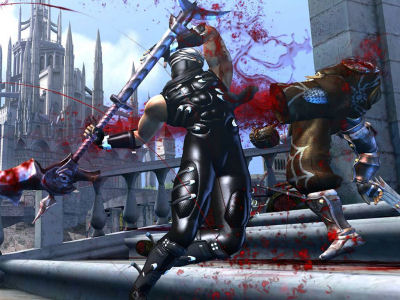 “How to get a head in life… and maybe an arm and a leg too.”

I wasn’t fond of any of these solutions. I wanted my achievements and I wanted to be online, in contact with friends. Instead I gritted my teeth and faced the level 2 boss, who wasn’t too easy in the first place, while being barraged by constant pop ups. Argh! I was pretty pissed about the entire situation. How could such a major bug in such a big title go unfixed for so long? How could this affect earning achievements in other games? I even considered scrapping the whole game but scrapping Ninja Gaiden isn’t easy for me – god knows I tried to give up the first one plenty of times out of frustration before finally beating it.

I didn’t get a chance to play the game again for quite a few days and luckily, so far, I’ve yet to encounter the bug again. My theory is that they had “sort of” fixed the issue in subsequent title updates. When I originally encountered the message I didn’t have any problems with having my achievements updating. The only oddity I noted with them was one of my recent achievements lacking the date it was awarded to me on but I still had it and my gamerscore was still correct. The fact that the problem seems to have gone away after clearing my cache and/or cycling the console suggests to me that the nature of the problem, as it originally appeared, has changed. Here’s hoping it doesn’t reappear!

At the time of this writing I’ve made it about half way through level 5 and suddenly difficulty has ramped up drastically. I’m encountering these exceedingly tough scorpion monsters and my save points, at least where I’m at now, are starting to thin out a bit. I should also mention that for some reason (the extra 100 achievement points and minor bragging rights, maybe?) I’m playing on the harder “Warrior” difficulty instead of the default one. I hope that doesn’t turn out to be a massive, frustrating mistake.

Damn, it’s nigh impossible to find actual screenshots of this game online. I pray the next generation of consoles include a screenshot feature in their standard UIs.