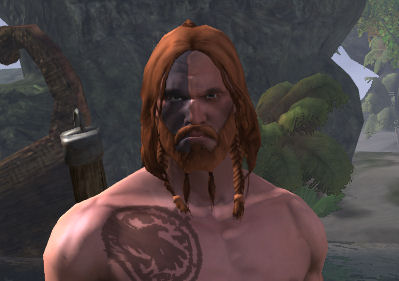 “You’d think someone with pigtails would be a little more cheerful.”

After writing the last article I took a long, detailed look at what had been patched recently in Age of Conan and had been unpleasantly surprised to see that they had done even less than I’d suspected. Until we see some of the new content I mentioned before (which, by the way, still seems a long ways off and sounds like it may not be enough regardless) I remain really quite disappointed in the state of the game. I loaded up a new character to show the game to a friend the other day and after just a minute or two of wandering the beaches whacking bandits and crocodiles I quickly remembered why I liked it so much – the beautiful graphics, the awesome and unique setting, and the fun combat mechanics. 🙁 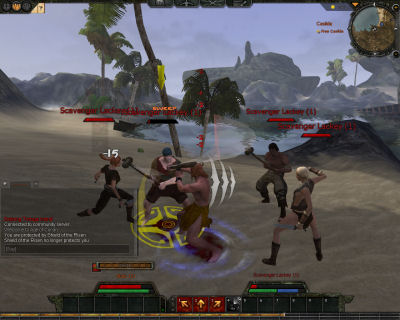 “Lazy screenshot: One of the very first fights in the game.”

I will definitely be coming back to Age of Conan again at some point in the future unless it ends up closing its doors much earlier than I’d expect. However when I do so it will be to play through with a new character on a new server and more or less as a single player experience with the objective of soaking in the PVE content. This is in sharp contrast to my original plans of attempting to dedicate myself to all aspects of the game (guild membership, PVP, crafting, end game stuff, etc.) for the long term.

That leads me to Tabula Rasa. The game came in the mail soon enough and I started playing it immediately. It really is quite innovative and fresh in a number of ways. Here’s some quick notes:

At first I was a little underwhelmed by it but after getting the hang of it I’ve got to say that I really enjoy the combat. It plays almost like a 3rd person shooter. You’ve got to aim at your target, you’ve got to click to fire, you’ll be reloading your weapons, and sometimes even changing equipment loadouts around, in addition to using special skills here and there, and unlike almost every MMO I’ve ever played combat is typically very quick. I’ve actually found myself wandering around, engaging in combat just for fun. 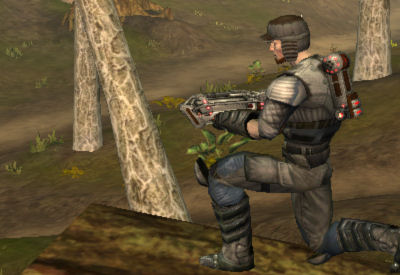 I like the way zones are structured. They tend to feel more like large, sandboxy areas, almost like a level in one of the GTA games or its successors. Perhaps that is being a bit too generous but by the time you’re around the middle of the level range for a zone (which is a pretty small range, by the way) you can pretty much go anywhere and do anything. It might not always be easy, but you don’t really run into “fenced off” areas like you did in a lot of older theme park style MMOs.

To further this less structured feel of the game every map has some “control point” bases that can be taken over by the enemy mobs in large, chaotic battles. It’s usually in your best interest to defend these bases or help take them back if they’re under enemy control. Again, very free form and surprisingly fun.

I also appreciate the fact the almost all of the content is soloable. You may have to wait a few more levels to run an instance dungeon area solo and it may still be challenging, but it isn’t impossible nor do you have to wait so long to do it that it is no longer be rewarding. 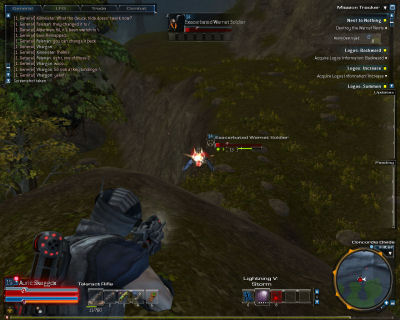 On the top of my list of negatives against the game is that despite being innovative and just plain cool in many areas I don’t necessarily feel compelled to keep going through the levels. The zones seem to quickly become repetitive – sure, new areas, new layouts, new enemies even, but the same “targets of opportunity” quests and achievements for each one, the same experience with attacking and defending control points, and the same laundry list of boring quests to work through. The combat isn’t quite fun enough to keep me playing month after month on its own.

The variety of equipment available could be a bit better, with not a ton of different options for visuals, but I dare say that it’s not too bad. Most people tend to wear what has the best stats regardless of visuals anyway.

The class system seems a little on the restrictive side given that every class is more or less restricted to their own types of weapons and armor. Still, coupled with the unique cloning system that lets you make a copy of your character which you can spec differently or even fork into another class, and the fact that none of the classes or equipment feel particularly underpowerered in the first place, its hard to really cite this as a major problem.

The lore doesn’t do much more me. It borders on generic sci-fi and I really feel like it could be a lot more compelling. Some people are really into it though so I’ll chalk that up to personal taste. Still, the whole “logos” system, and indeed “logos” powers themselves do nothing for me. In fact the logos powers are somewhat of a negative to me by themselves – they seem like another attempt to shoehorn magic into a setting that doesn’t need it so that they can compete in a genre filled with fantasy games. What is wrong with just having guns, bombs, and other, more unusual technology? At least to Tabula Rasa’s credit it isn’t 1:1 a magic system disguised as something else like in, say, Anarchy Online. 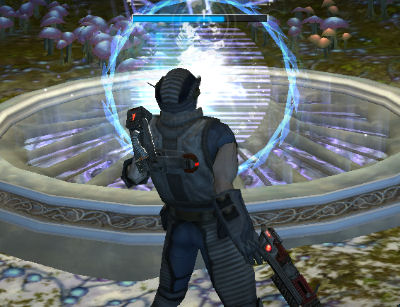 Anyway, I’m grasping at straws now. To sum it up, in its current, patched up state, the game has a lot to offer both in terms of entertainment and advancement of the MMORPG genre as a whole. If you’re looking for or even just want to try out another MMORPG that isn’t Everquest inspired fantasy theme park #203 I’d definitely recommend giving it a shot.

I’ll talk more about TR later, I’m sure, as well as possibly write a proper review of it in the future. For now though I’ve had to put it down in anticipation for Warhammer Online: Age of Reckoning!