Apologies in advance for the less than spectacular screenshots this time around. It had been so long since I did one of these that I apparently forgot what the hell I was doing. 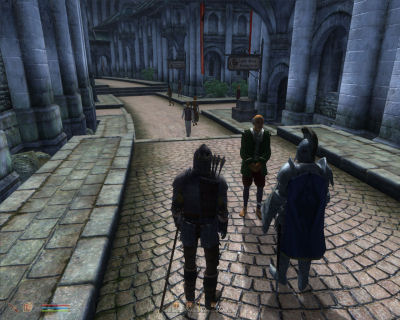 “It can be hard to squeeze through the crowds in the capital’s bustling market district.”

I entered the Imperial City and began looking for shops at which to offload some of the loot I had gathered. I admit, I was rather paranoid at first walking through the crowded city streets but soon enough I discovered that few people were taking much note of me. “Just another damn adventurer!” I’m sure many of them thought. As my nervousness decreased I found myself testing the waters a bit by going out of my way to strike up conversations with citizens and even the odd guard. Other than a little concerned chatter about the death of the Emperor everything seemed to be pretty normal.

I soon found myself in the Market District where I was able to sell my herbs, pearls, and other miscellaneous looted items to various shop keepers. After a stack of magic scrolls caught my eye I, at a shop keeper’s suggestion, purchased a couple of scrolls of conjuration to study. I decided that it would be in my best interest not to stick around too long to avoid raising any eyebrows and, after renting a room in a nice inn for the night, headed back out into the wilderness.

Since I made a fair amount of gold I decide to continue on my path of gathering herbs and pearls and hunting a bit. I decided to circle the Imperial City yet again only this time cutting a much wider swath out away from the road in order to hunt bigger prey than the simple mud crabs I had been fighting. Things went as expected – plenty of herbs to pick and the occasional wolf to skin all while practicing my new spells along the way. It was pretty uneventful, enjoyable even, and I temporarily let my worries drift away from me. 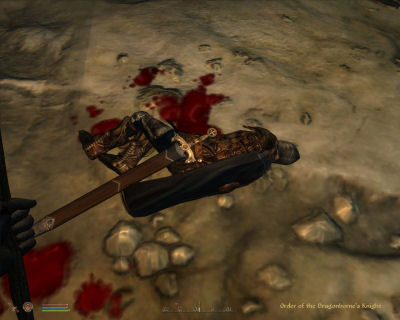 “This dude was apparently sick on the day his order had the class on how to kill weak ass goblins.”

Since I was feeling a bit more confident about my ability to defend myself I chose to head back into the goblin infested cave south of the city that I had fled from earlier. This time I managed to make it to the very end of the cave killing several more goblins. Along the way I found the remains of a few slain knights who evidently weren’t as lucky as I was. Knowing nothing of their order I pieced together some of their superior equipment for my own purposes hoping that it wouldn’t get me any unwanted attention later on. Overall, despite a few close brushes with death, this new expedition was quite a success.

I believe these dead Dragonborne Knights were added by Oscuro’s Oblivion Overhaul though I don’t know if they serve any purpose save for additional flavor and some helpful loot.

After this little excursion I decided to continue on my trek through the woods around the city. I came across a few interesting sites, such as a shrine devoted to someone named Clavicus Vile, surrounded by his somewhat odd followers. I also came across many more abandoned ruins and shrines which I tended to avoid rather than to explore due to my earlier observations about them often being inhabited by bandits and other unsavory types.

After a short period of time I wandered into an unusual scene – two rather large minotaurs violently attempting to wrangle what appeared to be a unicorn. Upon spotting me the minotaurs threw down their ropes and diverted all attention towards me. Getting the distinct feeling that I was interupting something I wasn’t supposed to have seen I attempted to flee but it was only a matter of time before the massive, muscular minotaurs caught up to me. A vicious battle ensued and I, somehow, came out the victor. Only remembering vague legends about unicorns I decided it would be best if I steered clear of the beast and be on my way.

The truth is while I have no idea how OOO has leveled the unicorn I highly doubt I can kill it. It is unclear to me how the Unicorn is regarded in Elder Scrolls lore and if someone such as the currently mostly good Garn would even consider killing it. I also don’t want to ride it and have its unpredictable, psychopathic ass permanently bound to me as my mount. Argh, damn annoying creature. 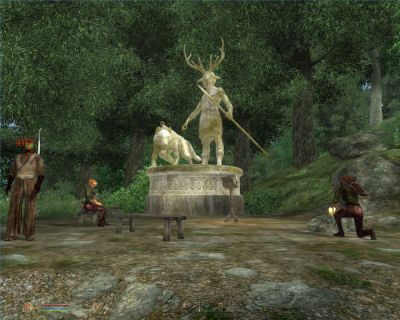 “No matter how hard I try I never find these pagan shrines in the woods in REAL life!”

Soon I encountered another active shrine in the wilderness. This one was surrounded by a small group of people who were obviously hunters judging by their garb. They seem accepting of me at first but soon insisted that if I truly considered myself a hunter I should make a sacrifice to their patron Hircine the huntsman. Having spent the last several days in secluded forests living off of the land by hunting animals and picking herbs I wondered if finding this shrine was something other the chance. Perhaps I should indeed pay my dues for, at the very least, continued success.

As I laid a wolf’s pelt at the feet of the statue of Hircine I was startled as a voice spoke to me. It asked me to hunt down and slay the very unicorn that I had aided earlier that day. Now this definitely cannot be coincidence! From the way I was contacted to the way the voice worded his statements pieces were starting to come together. Another foggy fragment of my memory returned – Hircine must be a Daedra! The Daedra are powerful beings from another realm who often dabble in our own world. A few people worship them as Gods though they’re usually considered to be evil and therefore Daedra worship is outlawed in many areas.

As I said my farewells to the other hunters it was apparent that they could tell that I had been contacted and seemed rather impressed though I doubt they suspected that, for better or worse, I would not be honoring their master’s request…