Who you gonna call?

I rise late from my Anvil inn room and leisurely wander the city streets for a while to attempt to overhear something that might turn into a lead but there doesn’t seem to be anything particularly interesting going on. After my brief glimpse of it the night before I figure the most excitement probably lays outside of the city walls on the Anvil docks. 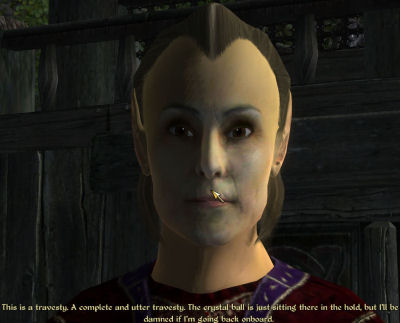 “Yes, it’s a travesty about your crystal ball. What about those murdered sailors again?”

Before I’ve even made it half way across the waterfront I’m hailed by a Altmer woman on a nearby peer. She says that judging by my appearance I might be able to perform a job for her so I’m quick to hear her out. The woman is quite distressed – something about her hiring a ship to retrieve a precious family heirloom only to have the entire ship’s crew turn up murdered upon their return. She needs someone to finish the task for her by retrieving the item from below deck as the ship is overrun by the ghosts of the slain crew members. She must have spotted the silver claymore strapped to my back and figured I was prepared to handle the undead. She isn’t wrong.

I agree to help the woman and, torch in hand, head below deck. It is a grizzly sight – corpses strewn about, many of them obviously killed in cold blood. The crew’s personal belongings still sat next to them, undisturbed. Card games interrupted and bowls of chowder now gone cold, like pictures frozen in time. Odd that nothing seems to have been stolen. I barely have time to react to the scene when I hear a crashing noise coming from just ahead in the captain’s quarters and draw my blade. Just as the woman had claimed the spirits of her slain crewmen restlessly roam the cabins. 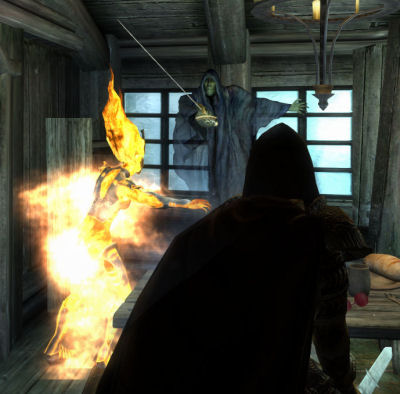 “Err, yeah, how about you charge in first…”

I quickly summon a flame spirit to aid me in the fight as a chaotic melee soon breaks out in the room. Items fly from tables and paintings are knocked off walls but soon the ghost is vanquished. I cautiously climb down to the next deck and continue exploring this ship of death. More spirits fly out towards me, clawing at me with corporeal hands and slicing at me with their sabers, their terrible moans filling the air. I’m more ready for them this time though and despite the close confinements I slay most of them with relative ease. Finally on the bottom deck I find the heirloom that the woman so desperately seeks, a crystal ball. 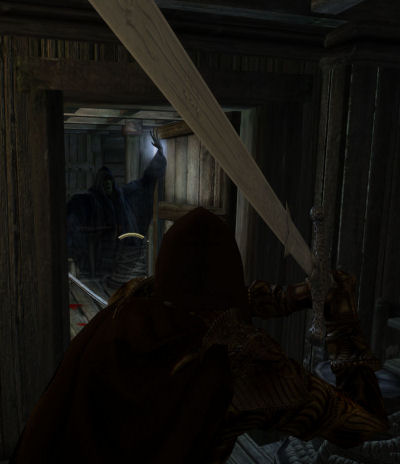 I quickly gather it up into one of my packs, survey the room one last time, and scramble up both sets of ladders and back out onto the main deck hoping to not have to fend off any more spirits. When I emerge the woman appears overjoyed at the sight of her crystal ball if not also a bit surprised that I succeeded in my task. As compensation she rewards me with a powerful enchanted cutlass which should fetch a pretty penny in the Imperial City’s markets if I don’t keep it for myself.

I quietly slip into the Flowing Bowl tavern to ponder the fate of the sailors over an ale. It isn’t long before an Imperial man steps in and takes a seat directly next to me. Before I have time to mentally question the curious nature of his seating choice given that I’m the only other person at the bar he turns and introduces himself to me. It turns out that this man, Velwyn Benirus, was directed to me by the Altmer woman from earlier. He tells me that he has a manor house in the city that he wishes to sell but it seems to be haunted. Hearing of my apparent skill at clearing out ghosts he offers me the job. Another opportunity so soon!

Velwyn shows me the house but initially refuses to go in. I insist and finally he gives me a quick tour around the premises. The place is covered in cobwebs and dust yet it is obvious from its general cleanliness that no one has been squatting here despite its abandoned state. Velwyn tells me that while all seems quiet now if I stay the night I’m likely to encounter the spirits. This whole situation sounds like a setup but I don’t get the sense that Velwyn is lying to me so I cautiously agree. 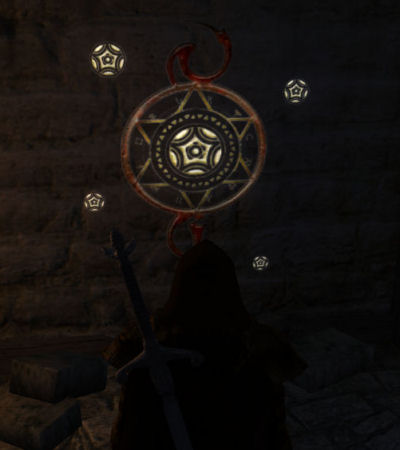 “A magical necromanic seal, what every home needs!”

After Velwyn leaves I make another round around the house only this time visiting doors he had left unopened. At first I don’t discover anything all too interesting but soon I stumble upon the house’s basement. The basement is impressively large, filled mostly with old wine casks and smaller barrels – potentially a fortune down here providing any of these are still full. As I reach the end of the final chamber I spot an odd looking seal on the wall. Now this is curious. 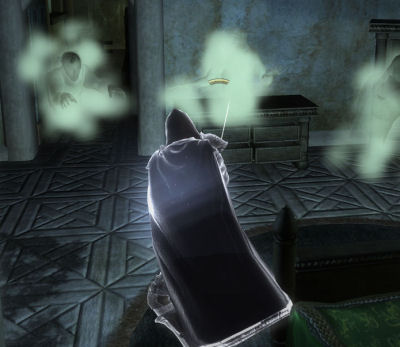 “Take a number and get in line!”

That evening I warily bed down for the night in the house’s master suite. As far as I can recall this is probably the biggest, most comfortable bed I’ve ever been able to sleep in and I’m enjoying the concept of being paid to sleep in a nice room instead of the other way around for once. Sure enough, as I’m finally drifting off to sleep I’m startled by a blood curdling moan. I immediately spring out of the bed and take up my sword but before I’ve even managed to rub the sleep from my eyes I am surrounded by ghosts. I quickly summon a flame spirit and jump into the fray. 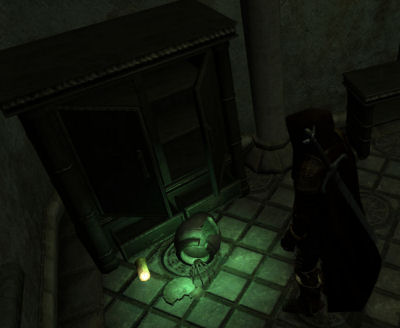 “Bethesda gave me a hand with this quest. *rimshot*”

The melee ends quickly enough. As I’m surveying the aftermath I hear a loud crash coming from the room below the stairwell – more ghosts! I dash down the stairs but alas the room is empty however I do find an old jar smashed upon the floor. Amongst the debris lay the skeletal remains of a hand clutching a note. Naturally I grab the note and attempt to decipher it.

The scrap of paper appears to be a page ripped from the diary of a incensed necromancer. The necromancer describes building a secret chamber in the basement to keep his physical form while he transcends into the spirit world. He mentions leaving the spirits of his previous experiments around the house in order to protect it. He also mentions that only one of his blood line can open the portal into his secret chamber. I immediately grab my things and head back to the inn to attempt to find Velwyn to find out more about the history of this house. 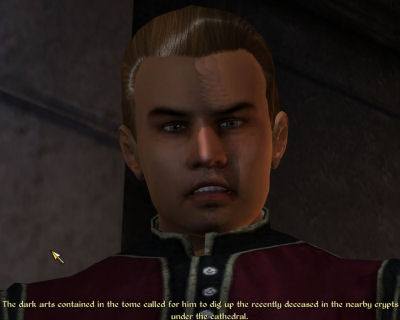 “And this is why I canceled my subscription to TV Guide.”

At first Velwyn seems surprised by the contents of the note but after continuing to press him he tells me the whole story. Velwyn himself is the grandson of the necromancy in question who was killed when the townspeople of Anvil found out about his hobby. The body apparently disappeared and ever since the house has been cursed. I had a feeling Velwyn hadn’t been giving me the whole story! I convince him to come back with me so that I can finish the job of removing the curse.

After vanquishing a few more ghosts we return to the strange seal in the basement. It takes some time but eventually Velwyn is able to remove it though he doesn’t stick around to see what is beyond the portal. This large, secret chamber is filled with all kinds of necromantic tools and tomes not to mention a scattered selection of long decayed corpses. The centerpiece of the room is an alter containing a final corpse – no doubt that of the necromancer himself. 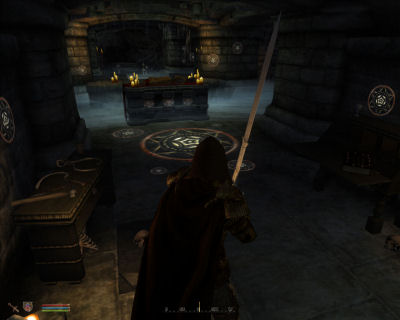 I reach out to examine the necromancer’s body when the entire corpse suddenly jolts and a disembodied voice begins speaking to me. It’s the necromancer, Lorgren Benirus, and he spins a sorrowful tale about how his soul has been trapped and how now he just wants to make peace with the Nine and finally rest in peace. To do this, however, I must join the severed hand I found earlier to the rest of his body. I somehow instantly knew that Lorgren was trying to trick me. Still, if I complied and Lorgren rose from the dead I might be able to finish him off and lift his curse from the house entirely.

As I predicted attaching the hand immediately causes the necromancer’s body to begin to flush with life. Before I can react he summons several skeleton warriors to distract me while he rises from the alter. I immediately summon a companion of my own and fight off the skeletons, beating a path directly towards Lorgren. Once I reach him it is all over for the necromancer as blow after blow from my silver claymore folds him in half until he falls, finished, onto the cold stone floor. The curse is lifted!

I search the secret chamber a final time before heading out. As I return to the tavern I find Velwyn sitting at the bar with an empty tankard of ale in front of him. He looks sick with nerves but that quickly changes as I tell him that the deed is done and the necromancer’s spell is broken. Elated he hands me a small pouch fill with coins and jewels, shakes my hand, and hurriedly runs out the door.