Feeling a little paranoid about the potential for suspicion regarding my involvement in Slythe Seringi’s death I decided to avoid busy roads and paths and instead travel through the Great Forest to the northeast, eventually arriving in the city of Chorrol, nestled amongst in Colovian Highlands. Other than my a visit to the area earlier while mapping landmarks and another to seek training a the Mage’s Guild I had no recollection of ever visiting Chorrol before. The strange looks of possible recognition that I sometimes received from people in other areas were all but completely absent around this city. The feeling was liberating and despite its rocky, rugged surroundings I warmed up to Chorrol rather quickly.

Both the Mage’s Guild and the Fighter’s Guild had a strong presence in the city and my first stop after walking through Chorrol’s considerable main gate was to the Mage’s Guild to view their wares and see what guild members were offering training. As the evening began I headed over to a The Grey Mare inn for a drink and a room for the night. The Grey Mare was small and lacked any real frills but it was quaint enough. Of the few patrons still hanging around the bar was a man who introduced himself as Valus Odiil. He was drinking heavily with a deep look of sorrow in his eyes. Without any invitation from myself he began telling me all about how he and his two sons owned a large farm outside of the city walls and how it had been recently plagued by raiding Goblins. The Goblins, he said, weren’t of a great enough concern for the city guard to take up arms against. 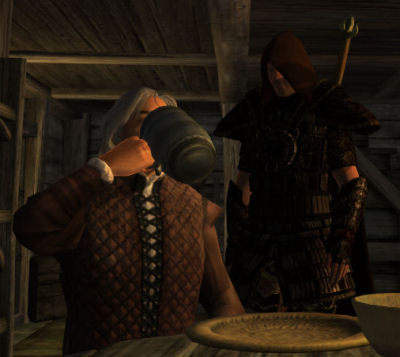 “Drop the mug and put your hands on your head!”

Apparently though, the Goblins attacks had been increasing more and more in frequency and they had more or less chased Valus and his family from their homestead. His own sons had decided to stand their ground against the Goblins and that, it seemed, was Valus’s problem. Fueled by ale he confessed to me that old age had tempered his enjoyment of battle and that he now feared such conflicts, though he feared for his son’s safety even more. As he looked up at me from his tankard I could he had had hatched a plan and sure enough, he asked if I could go in his place.

Slaying Goblins was nothing to me and the man seemed sure that he could offer me a reward I’d be pleased with if I could not only protect his sons but also deal with this little Goblin problem once and for all. More work, so soon. Excellent!

Early the next morning I met his sons outside of the gate and whilst both boys were vengeful and hungry to fight they also seemed rather naïve and ill-equipped. No matter, I kept my thoughts to myself and followed them to their fields. As sure as the daylight a small group of Goblins ran towards the farmhouse only to spot us and change direction, drawing their weapons. As they charged I summoned a Daedric creature to assist me and drew my blade. One of Valus’s son became spattered in blood as I cleaved the first Goblin to rush past me in two with a single smooth swing. Screaming with fury he charged into another group of Goblins that had been stirred by the shouts of the first. The battle was over quite quickly, with both sons still quite alive. After I healed their wounds we patrolled the parameter of their farm to ensure that we had slain them all and I returned back to The Grey Mare to give Valus the good news. 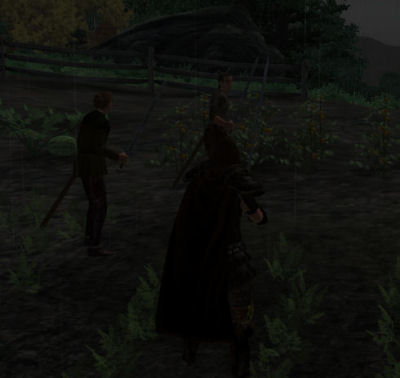 “My kind of farming…”

Valus was, at first, ecstatic. After scratching his chin in a look of prolonged contemplation he reached under the table and brought forth a blade wrapped in a cloth satchel. As he unwrapped it he explained that when he was younger and an adventurer like myself this short sword, Chillrend, had been his most prized possession and saved his life countless times. As he apparently no longer had the will to fight he figured he didn’t need it anymore and would pass it to me. The blade was indeed quite a treasure – it shimmered with a faint blue glow and it turned the air immediately around it frigid. For a moment I thought about asking if the blade might make a better gift for one of his budding adventurer sons though I quickly reconsidered and accepted the sword as payment.

Later that day after making my rounds around the city I stood at the base of the hill where Chorrol Castle sits glancing up at it when my concentration was broken by the shrill voice of an older peasant woman. She told me that “today wouldn’t be a good day” because the countess was “right cross” about something being stolen from her. Curious, and with little else to do, I walked to the castle to pay my respects.

Countess Arriana Valga was a gracious host though she had a hard time hiding her frustration even while talking to me about her city and her court. She informed me that her and her guard were in the middle of an investigation. Apparently someone had stolen a portrait of her late husband, Count Valga, right out of her bedchamber. As we talked more she eventually asked me if I’d like to help her with the investigation and mentioned that they had already narrowed down some clues and potential witnesses and/or suspects. 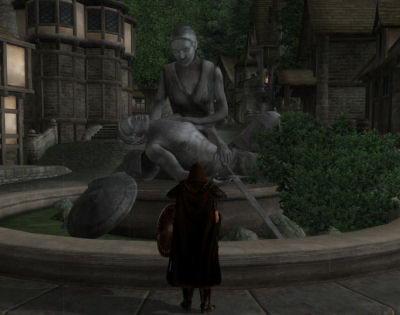 There were only a couple people with direct access to her private bedchamber: the castle porter and the court mage. First, however, I decided to talk to some of the other people who might know more about the situation. First up was the castle’s herald, Laythe Wavrick. Laythe’s only piece of information concerned the drinking habits of the porter. He was apparently a drunkard and had even sunken to asking for money to help support his habit. Very interesting. Next up was an Orc steward named Orok gro-Ghoth. Orok said he wasn’t out that night due to the heavy rains but also mentioned catching the porter drinking in the castle’s west tower one night and confronting him about it. Finally I spoke to the Captain of the Guard, Bittneld the Curse-Bringer. Bittneld apparently hadn’t gone to the castle that night but had mentioned running into the mage in the west tower on another occasion which he seemed to find at least somewhat curious.

Finally, the actual suspects. First I spoke to the porter, an Orc named Orgnulf Hairy-Legs. Orgnulf had a bad attitude and at first refused to even speak to me. Eventually he begrudgingly told me a story about arguing with a delivery boy who had slipped in the rain and damaged a shipment of wine that night. Chanel, the Court of Chorrol’s resident mage, told me she spent the night taking star readings in the courtyard and then drank some wine in the great hall and went to bed.

So now I had a motive for the porter. However, the mage’s story definitely didn’t check out. Two separate people mentioned it raining heavily the night of the robbery yet she claimed to be in the courtyard taking star readings. Very suspicious. I decided next to search for clues around the castle. First stop, the great hall. I found some paint stains on the carpet but nothing to point me in the right direction. I then decided to head over to the west tower. Upon exploring it I found an easel with an unfinished painting on it and evidence that it had been painted recently – someone in the castle is a painter! Since both suspects had been spotted in the area this doesn’t really help out too much though, though it’s hard to imagine the stubborn Orc being an artist. I moved my search to the suspects themselves’ rooms. 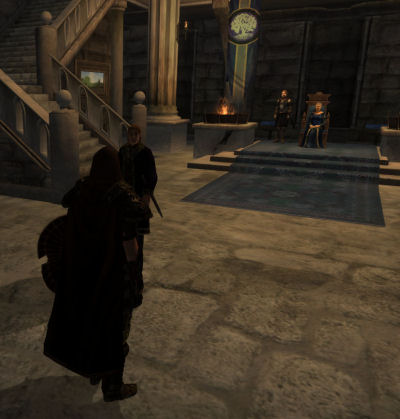 “Entering the court of Chorrol.”

The Orc porter, unsurprisingly, gave me quite a hard time about searching his room but professed that he was hiding nothing. Indeed, I found nothing of real interest there. Chanel, the mage, was a different story. I woke her from her slumber and began searching her room. At first she seemed overly friendly towards me but when I did nothing to entertain her advances her attitude changed sharply. Soon I found some painting supplies that had been hastily stashed in a small lock box upon her dresser.

As I grabbed up the painting supplies I took a step forward and pointed at her. “You! You’re the one!” At first she bit her lip, curled her brow, and focused on me as if every bit of anger she’d ever possessed was bubbling to the surface and the possibility of her using whatever abilities had earned her the position of Court Mage to attack me popped into my mind. Fortunately for all involved the hatred in her eyes almost immediately melted into sadness as the tears started to run down her face.

Quietly sobbing, Chanel confessed her affection for the late count. Not only for he himself, but for his portrait – a portrait that she herself had painted. She evidentially missed him so much, and was so jealous of the countess having the painting all to herself, that she stole it. She removed the rolled up canvas from under her bed and gave it to me, pleading not to tell the countess where it was discovered. While more questions remained about the exact nature of their relationship I decided not to press Chanel further as the countess might be none to pleased with me if I were to stir up such accusations. Regardless, I felt it best to tell the countess about what I had learned about the robbery. 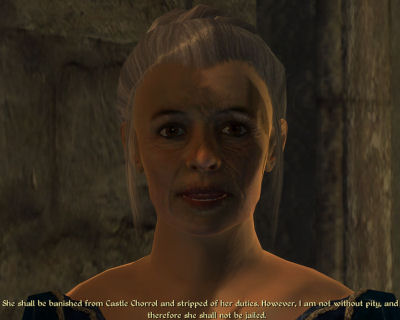 “Ye gods, get back into the shadows old woman!”

The countess was quite displeased at being betrayed by a member of her own court and stern in her punishment. She stripped Chanel of her duties and banished her from ever coming back to Chorrol. In gratitude for recovering the painting she rewarded me with a generous helping of gold and gemstones and, possibly most importantly of all, I had made my first friend in power. Yes, Chorrol was working out quite nicely for me…