I stayed in Chorrol for quite some time doing the odd job here and there while spending most of my free time studying spells and reading books in hopes of sparking some memories and, at the very least, regaining some long forgotten knowledge. Of those jobs a couple turned out to be fairly eventful.

The first started one morning as I stepped out of my inn room to find a shady looking Dark Elf propped up against the wall next to my room door patiently waiting on me. I was, of course, prepared to draw my blade but much to my surprise the Dunmer made no move. Instead, he calmly looked up and slyly smiled at me. He spoke and told me that he had heard I was good for the type of job he had to offer and began laying out the entire scenario.

Apparently the Dunmer had employed a local thief on a regular basis for years and, eventually, this thief had betrayed him and ran away with a valuable object. This object eventually fell into the hands of a local tribe of Redguard Valley Ogres. He desperately wanted the object and would pay me to brave the Ogre’s den in search of it. This task, sounding like much more of an adventure than my last few jobs, I gladly accepted. 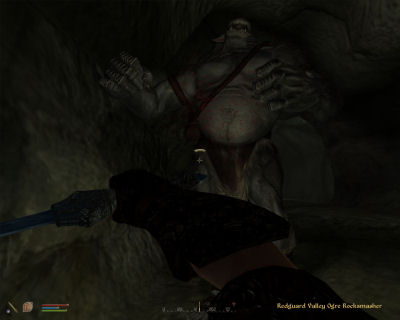 Upon reaching Redguard Valley to south of Chorrol it didn’t take long for me to follow the horrid stench to the cave where the bulk of the Ogre tribe lived. As I crept into the cave and entered the main chamber a number of blood thirsty ogres caught my scent clumsily came running to investigate. Ogres were little challenge to me at this point and I halved them in place one by one until I finally reached the room in which the Ogre Chieftain guarded his booty. The Chieftain turned out to be quite worthy of his spot in the tribe’s pecking order and we fought viciously for what seemed like an hour before I finally stood victorious. 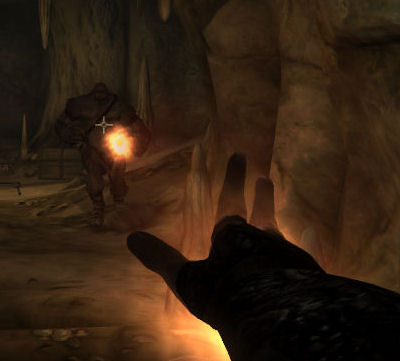 After rummaging through the Chieftain’s rather lackluster treasure room I was sure I had found the object that the Dunmer was after. Unfortunately I was faced with a conundrum. The item in question was a special ceremonial blade, the Chorrol Honor Blade, or at least I suspected as much. So the dilemma was clear – do I return to the Dunmer who was employing me or do I return it to the Court of Chorrol where it was stolen from originally?

Given my reputation and relationship with the Countess of Chorrol I thought it only best to turn the Honorblade of Chorrol back to Chorrol. Laythe Wavrick, the court Herald, was ecstatic to have the blade back after so many years and arranged to reward me with a special item of my own from Chorrol’s armories: a mighty shield named the Escutcheon of Chorrol. I have no doubt that the mysterious Dunmer would soon learn of my betrayal but I bet on him being more concerned with getting the sword back for himself than seeking any vengeance on me. 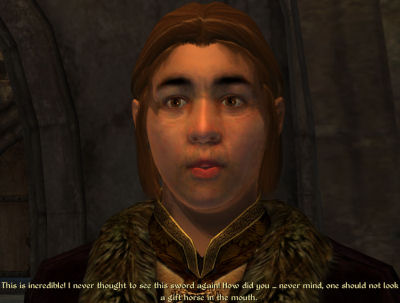 “No kidding. I could have kept the thing you know.”

So now I had an excellent new shield to go along with Chillrend and just in the nick of time as well.

Then, as I was walking back to the inn a young Argonian boy came running towards me yelping “Are you Garn?” I slowly nodded and he hurriedly spat out that Seed-Neeus needed to see me at her traders. Hmph, another opportunity for work I supposed and, of course, I was correct. As I entered Northern Goods and Trade Seed-Neeus hurried to me and thanked me for coming. She explained to me that her daughter, Dar-Ma, has gone missing after making a delivery on her horse to the nearby town of Hackdirt. She asked me to look for her or any clues of where she might have been.

I had visited Hackdirt once previously in my travels and wasn’t at all surprised to hear its name mentioned along side something like this. It was an odd place – a run down town that looked like it might have been a good size at one time but at some point most of the buildings in the town had been burned to the ground. The few locals I talked to there were unusually unfriendly to me and are apparently equally suspicious of all outsiders. 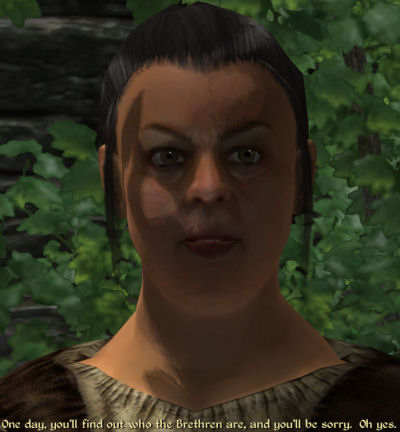 “What, are they going to knock on my door and shower me with pamphlets or something?!”

I immediately rode south to Hackdirt. Upon arrival I had little time to look around before night fell and search for clues via torchlight would surely give me away. In the church I found an unusual book upon the alter. It was something about “Deep Ones”, written in an odd runic language that I had never seen before. This was quite strange and certainly nothing to do with The Nine or even Daedra worship to my knowledge. Of course, none of the townspeople seemed to know anything about Dar-ma though I didn’t expect them to be extremely forthcoming in any case. It was time to call it a night so I didn’t dare to get a room at the town’s sole inn. Instead I made camp in the surrounding woods.

Deep into the morning I was awoken by the sound of someone passing through the trees. As I reached for my blade I was surprised to see a tamed horse slowly walking through the woods, grazing. The horse seemed to match every possible description of Dar-ma’s horse Blossom. Interesting.

In the morning I went back into Hackdirt and brought the horse with me. When I inquired about the horse to the storekeeper whom Dar-ma was supposed to be delivering she claimed that the horse was hers yet at the same time she seemed totally unconcerned about its welfare. Very suspicious. 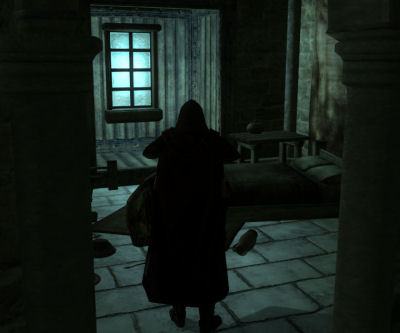 Next I decided to visit the inn as to look for clues that Dar-ma might have been there. “Clues” is probably an understatement for what I found there. One of the inn rooms was completely ransacked and after a quick search of it I found Dar-ma’s journal. It appears from her last entry that her horse had thrown a shoe and she was forced to stay the night in the town. She also mentioned hearing footsteps outside of her door. When I asked the inn keeper about the room and the journal itself she claimed that Dar-ma must have simply left without the book. The more I questioned her, the more belligerent she became, even tossing out a vague threat about “The Brethren” at one point. I’m obviously not getting the whole story here… 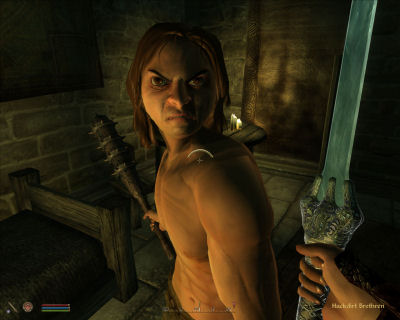 “The world is a more attractive place when you’re hiding down in your cave.”

The next odd event occurred just a few minutes later as I was poking about in some of the old, burned out buildings on the outskirts of town. Out of no where I was attacked by a man wearing only a pair of sack cloth pants and brandishing a club. He had unusually large eyes and a crazed look about him. Although I slew him easily enough I was still taken aback by how strange he was. I wondered if this was one of the “brethren”.

Later that day I had finally made a breakthrough. One of the townspeople, a man named Jiv Hiriel, told me he had information and to meet me at his home. I was preparing for some sort of ambush but was surprised that Jiv was legitimate. He nervously told me that the townspeople had Dar-ma held captive in the caves below the town and planned on sacrificing her to the Deep Ones soon. He gave me a key to the various trap doors scattered throughout the town and suggested that I make my move that night, while the majority of the townsfolk were at The Gathering. 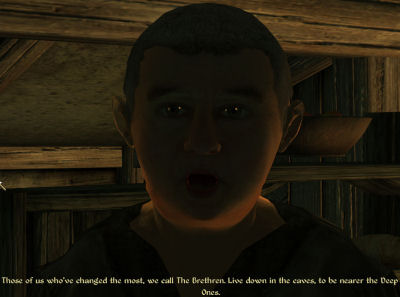 “Well, I call them freaks.”

Later I snuck back to Jiv’s house and used the trapdoor in his house to gain entrance into the caves below the town. Much to my surprise the cave system was quite extensive with various rooms and an exit into every building in the town. I was able to sneak a quick listen to the sermon. They spoke of The Deep Ones forsaking them after the Legion had burned down their town, and about how only a sacrifice would bring them back. 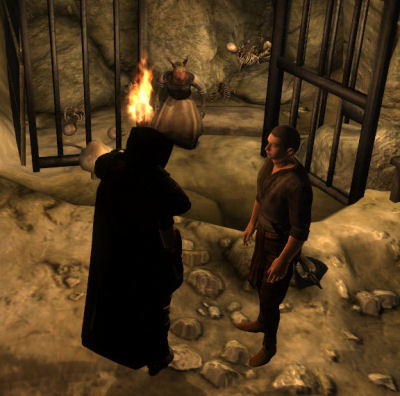 As I turned away I faced another one of those crazed, big eyed “brethren” though I was able to subdue him without making enough noise to get me noticed. As I crept through the cave system I came across more and more of these “brethren”. They were relentless in their attacks but nothing I couldn’t handle – I was more concerned with drawing the attention of the rest of the townspeople. Eventually I encountered Jiv once again, and he quietly led me to place where Dar-ma was being held. I thanked him for his help one last time and led Dar-ma to the safety of the above ground world and quickly away from Hackdirt.

I still don’t know what kind of foul things the people of Hackdirt had dug up beneath their town. Perhaps the “Deep Ones” were nothing more than a prank by some bored Daedric Prince, or perhaps something even more ancient and evil was unearthed there. Whatever the case I had enough foes to concern myself with to worry about those that had long since forsaken their people and vanished.