It amazes me to see how little I’ve actually posted about my attempted America’s Army 3.0 clan considering how much work I put into it and how much it dominated my gaming time for a little while. I intended to post an update about how that whole thing turned out but it seems I never posted much about how it even started out so I guess I’ll post the whole story, abbreviated as it may be. 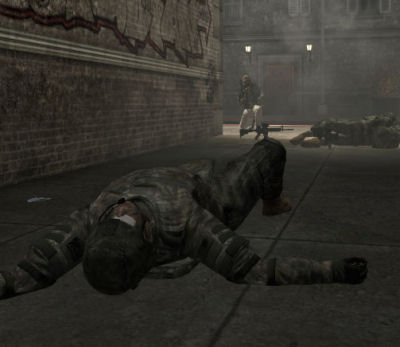 “Myself having just suffered a rare, humiliating death by the VIP.”

America’s Army 3.0 (referred to as AA3 from here on out) was rumored to be a reboot of the popular online tactical FPS America’s Army. It was basically going to be a new game from the ground up. I ran a small gaming “clan” dedicated to these sorts of games with aspirations of playing them in “serious business” tournaments and the like. Since these types of games are few and far between these days I generally keep a close eye on new releases and AA3 really caught my attention – not only was I a big fan of the original game, having played it for countless hours with my old clan [TPG], but it sounded like it was going to be amazing. The more I learned about the game the more inspired I was to take my clan, <8AT>, out of the mothballed state it had been in for years and get things going again. Eventually I got into a last minute private beta of AA3 and I liked what I saw despite it still being a bit rough around the edges. After looking around a bit and not finding any existing clans that interested me I made the decision to relaunch my clan.

And so I did! It took a lot of work – I revamped our website, setup a new Ventrilo server, reserved a ranked AA3 server, and started work on a recruitment campaign, never mind revising all of our rules, policies, and hell, even the entire focus of the clan. This was going to be something slightly different then the last incarnation of the clan and I was quite pumped up to get it going. A lot of my old clan buddies who had played SWAT 4 with me in <8AT> and/or America’s Army with me in [TPG] had expressed interest in joining. Things were looking up.

Finally the release date for America’s Army 3 arrived and while the game with rife with technical issues it was still quite an awesome and fairly unique experience. There were some troubling things, such as how many of the bugs from the beta hadn’t been fixed yet, including some pretty major ones, in an apparent rush to get the game pushed out, and the news that apparently the entire civilian development staff of the game had been unceremoniously fired by the Army the day after the release to move development in-house. Still, many of my old friends joined or rejoined the clan including some I hadn’t expected to show up while sadly some I did expect (and hope) to show up never materialized. We started strong though – my old co-leader from the original America’s Army days in [TPG], 20kill, was there and took the much needed role of second in command.

For the first few weeks we spent our time suffering through bugs and bizarre issues with the game’s central authentication servers, and simply trying to figure out the many nuances of the gameplay. Much fun was had though the bugs and unpolished state were simply too much for some members to deal with and there was a small, gradual exodus of mostly old friends from the clan very early on. Recruiting didn’t go exceptionally well either – it seemed that most of the clans in AA3 pitched themselves as super serious, hardcore “realism” clans where members had to follow strict orders, call each other by rank, and all sorts of other silly things. I didn’t have any problem with such realism clans but this wasn’t what I had envisioned <8AT> as being. Unfortunately though, I quickly noticed that most of the people who were looking for a clan in AA3 were looking for that kind of an experience and the majority of those who weren’t simply weren’t looking for one in the first place. Thanks to a combination of technical problems with AA3 itself and the fact that we were mostly adults with jobs who didn’t play the game 24 hours a day, our server floated around wildly between obscurity and semi-notoriety but never really gained the full on popularity I had hoped it would, putting yet another dent in our recruiting efforts.

The state of the game improved a bit with a fair amount of mostly small patches in the first month of its release in June. Many of the changes seemed like minor fixes and band-aids which did little to comfort us in the shadow of some of the bigger issues that loomed. The communication from the devs also all but stopped during this period which was a shame considering how active it had been in the old days and even lading up to the release of the new game. Finally, after July, the patches stopped, and I had a lot of serious questions in the back of my mind about the decision to dump the previous development team and what it had meant for the future of the game itself. Was this just some sort of fumble? Had the funding been cut drastically? Was the entire project being canned? Who knew.

During this lull in official activity the influx of good new recruits into the clan still hadn’t been strong enough to counter the previous departures and I found myself losing a lot of interest. Originally I had to more or less force myself to carve out a section of my free time, especially on week nights, to play AA3 and with the state of the clan and more so the game itself it began harder and harder to do so. I also changed jobs from that of a programmer to that of a network engineer and while the programming tasks I was assigned left a lot of breathing room to surf the web here and there, reading about the state of the game and keeping up with the clan, my new position was hectic and saw me putting in quite a lot of overtime. At around the same time 20kill, who had been instrumental in keeping the clan alive and active, suddenly departed. At first he returned a few times but eventually left and was never heard from again. The clan probably could have survived my reduced commitment but with 20kill now completely out of the picture and interest from the rest of our membership waning I knew the end was near. 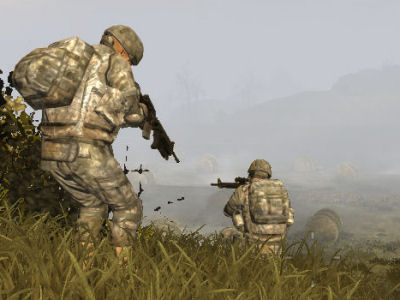 Finally, after a month of silence, another patch was released in early September. Everyone was hoping it would improve things in big ways and breath some new life into the game but it didn’t seem to deliver and certainly didn’t help out <8AT>. I felt like the depression brought on by the state of the game was something we were all feeling across the board to different degrees. Even the official America’s Army forums seemed to have noticeably slowed in activity. Eventually the few remaining members dispersed unceremoniously. The clan was dead.

I stopped following the game and hadn’t even really played it since around this time though I did keep my eye out for patches: there weren’t any. Surprisingly there hadn’t been any patches since that September until February. Finally, another patch was released just yesterday which is what prompted me to write this post. The last two patches were large but don’t include any new maps or promised features and seemed largely unimpressive for having taken so long. It seems my original suspicions about the change in development were quite possibly correct – depressing since I did in fact enjoy the game and, even after <8AT> dissolved, hoped it would succeed and I could possibly even return to it.

I have no idea what the state of the AA3 community has been like for the last year (I picture a lot of rage posts) but I can’t imagine it had been as healthy as it was in the America’s Army days when communication from the development team was frequent and, while patches were often few and far between, they were usually also fairly major. In my opinion if a company wants their game to have “long legs” online it has to try to create and maintain a community and it needs to feed that community with at least little chunks of carrot on the end of a proverbial stick semi-often. With AA3 that online community was literally all there was to the game so it was critical to keep people playing, especially considering the goals of the project as a whole. Personally I find it to be a bit insulting when a developer asks players to commit themselves to a game yet does not offer any commitment in return, at least in the form of the occasional bug fix here and there. This was why the original incarnation of <8AT> stopped playing SWAT 4 – I loved the game but it had issues and the development team and/or publisher seemingly washed their hands of it as soon as they had our money.

Then there is me. Over the years I’ve participated in several different clans, guilds, and the like, and have often found myself quickly rising up the ranks into positions of leadership. I’m not sure if I have a natural knack of leadership and/or management or if I was just better suited to it (or maybe just to be nominated for it) then others in the particular situations I’ve been in. At times while being in these kind of “officer” positions I felt the urge to break out from beneath whatever structure or leadership was above me, frustrating me, to start over and do things my own way which is, in part, how <8AT> came about. In practice, however, I’ve consistently found myself to be much more suited to those kinds of secondary leadership roles where I’m not under quite as much pressure or commitment yet can still be useful and contribute the group. I suppose with this, what might prove to be my final run at running my own clan, I’ve finally come to terms with this.

Being out there, putting the whole operation on the line by myself was often a big bummer, even with friends backing me up, the pressure felt like it was solely on me – others could come and go as they pleased and often did. I especially disliked having to worry about recruiting and now better understand some of the attitudes I encountered when joining or watching others join past clans and guilds I was in. For me, I suppose, there is a delicate balance in the feelings of pride and accomplishment, and even control, gained from running or helping run a group, and the enjoyment I need to have in actually playing the game. When running the group saps the fun out of the entire thing, or worse, the stress bleeds over into day to day life, then the balance is too far off.

I may give running a clan, guild, or some other type of community another go at some point in the future. It’s quite possible, even, that <8AT> itself will have another run some day. Hopefully if that does happen I’ll be able to concentrate on running the group and playing the game without also having the state of the game being as much of a concern as it was the last two times. For now though I think I’ll be content to let others run the show and try my hardest to resist the temptations of sweet, sweet power. 🙂