Practically as soon as I stepped foot back into Bravil I was approached by a young messenger who told me that my assistance was needed at the Mage’s Guild. I was slightly annoyed to have been harassed before even recovering from my last task but also rather happy that my reputation had been spreading so quickly. After a quick stop at my inn room to unload and clean up a little I made my way to the Bravil Mage’s Guild.

As I entered the guildhall an Argonian woman immediately took notice of me and discretely waved me over to her. She introduced herself as Kud-Ei and told me that her friend, Henantier, was missing and that there was a reward for helping locate him. As we walked and Kud-Ei and I reached a more secluded section of the hall, however, her story changed. She explained that Henantier was in fact trapped somewhere and that she could lead me to him when I was ready. Very odd indeed. Still, I didn’t think the Argonian was attempting to manipulate me for any ill reasons and agreed to accompany her. 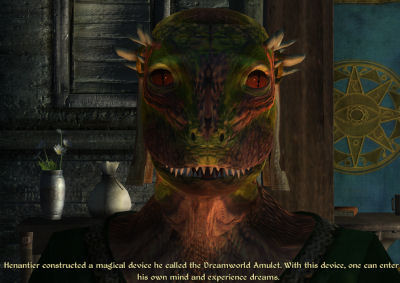 Kud-Ei lead me to none other than Henantier’s house. As we climbed the stairs Kud-Ei explained to me that Henantier had been experimenting with a magic that gave him control over dreams and had enchanted an amulet to let him enter and explore his own dreamworld at will. Sure enough, there he was sound asleep on a bed. Somehow though, she explainied, Henantier had become trapped in his dreams. He and Kud-Ei had apparently taken various safety measures and Kud-Ei knew what must be done to rescue him – the amulet could be used by someone else so that they could join Henantier in his dreams and attempt to help free him. Unfortunately, this person had to be someone Henantier had never met before, a complete stranger, which is where I came in. 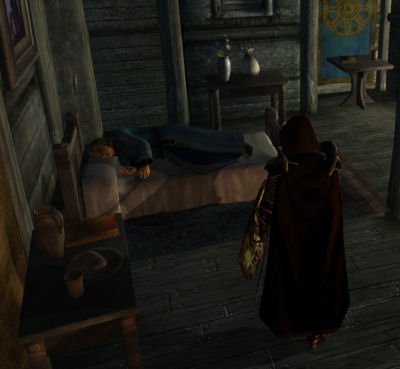 “But he looks so peaceful.”

Truthfully I wasn’t very keen on the idea of entering someone else’s subconscious. This seemed like a powerful and potentially very dangerous magic which was probably why Kud-Ei didn’t want to discuss it openly at the Mage’s Guild earlier. Even so, still being quite keen on learning and experiencing new things, and perhaps secretly hoping to learn a bit of my past self from my own subconscious, I agreed. I sat on a bed across from the one where Henantier slept and looked up at Kud-Ei as she slipped the amulet around my neck. Almost instantly the world went black…

I found myself standing in a strange, twisted version of the Henantier’s house wearing only the enchanted amulet. Before I had completely gained my senses Henantier himself approached and spoke to me. He didn’t seem to know where he was or how he got there but he did tell me that he had lost a few things and wanted help looking for them. This was a vague statement and I was quite conscious that this world wasn’t reality and he could be referring to literally anything. 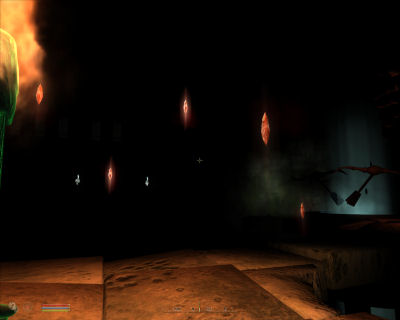 “I’m pretty sure my dreamworld would be a lot more interesting than this.”

I looked around the room a bit searching for clues and soon opened the door into the next chamber. The area inside contained a massive, black void filled with all kinds of strange looking objects, with a series of narrow paths winding their way throughout. I grabbed a nearby torch and began following a path. I immediately started noticing the subtle but telltale signs of various common dungeon traps sprinkled alongside a few much more bizarre ones. I carefully continued, avoiding pressure plates and tripwires while being as observant of my surroundings as possible. Finally, upon reaching the end of the path I found a shining jewel perched upon a stone pedestal. Despite all of the traps I had just carefully avoided I was compelled to pick it up. As I lifted it up it started to glow brightly and then disappeared, right from my hands! Suddenly I was standing back where I had started next to Henantier. I questioned him a bit more about what he was missing and although his answers weren’t helpful it was clear that his mental state was more sound than it was the first time we spoke – had I somehow help restored a portion of Henantier’s sanity? Is that what he had lost?

Perhaps I had to face more of these challenges to further restore Henantier’s mind so that he could guide us out of his dream world. As I entered the second chamber it appeared similar to the last – a large, open black void on which only the ground I stood upon seemed to be consistent with the normal laws of reality, and even it seemed to be floating unsupported in the ether. In front of me sat a small chest in which I found a scroll. The scroll contained a cryptic series of diagrams which made little sense to me at the time. As I walked forward I approached what appeared to be some kind of strange maze of tiny platforms. When I stepped forward I realized that each platform was in fact a kind of pressure plate, and thanks to my keen reactions just narrowly missed being perforated by a barrage of poison darts. I quickly jumped back off of the platform and took another look at both my surroundings and the scroll. 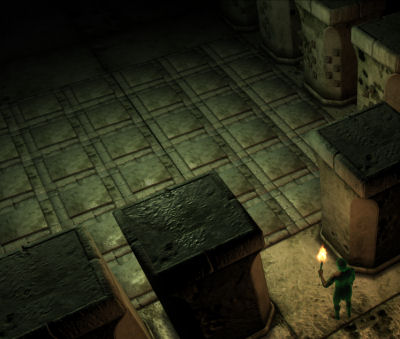 After studying the scroll for a while I finally noticed a pattern which I hoped would indicate the correct path to take through the deadly maze. Sweat no doubt rolled down my brow as I set foot back on the first of these plates, yet no trap was sprung. I stepped upon the second a little less fearful, and before I knew it I had conquered the puzzle and the next element of Henantier’s sanity had been returned. 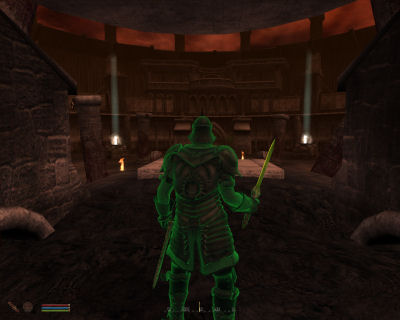 “All dressed up with nowhere to go…”

The next puzzle I faced was quite different indeed. As I entered the chamber I found myself in a small stone room containing a series of chests and a large, armored door. The chests contained a selection of weapons and armor which, still being quite nude, I was quick to don. Opening the door I found myself standing in the center of a small ruined arena. As I turned to survey the place the door I had entered from simply vanished – I was trapped. Spinning back around and drawing my newly claimed sword I was startled to see two large minotaurs, possibly minotaur lords judging by their massive size, standing on the other side of the arena. They had noticed me as well and wasted no time charging directly towards me. 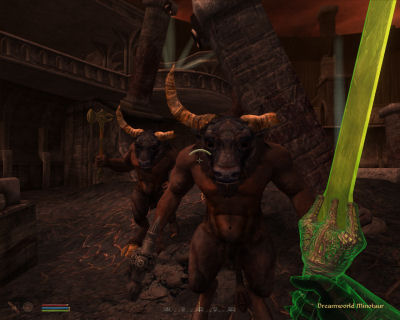 “Well they certainly don’t look happy to see me.”

I attempted to cast a fireblast at one of the beasts but found that my magic had no power in this place. I raised by sword and prepared for impact. In a matter of seconds one of the huge beasts had slammed his massive axe down upon me but deflecting its blow I turned into my parry and slashed at the minotaur, cutting it deeply. I continued this tactic of dodging and parrying the huge beasts and landing my own strikes when I had opportunity until I finally stood victorious over both of them. After taking some time to recover I located another one of Henantier’s elements and was yet again whisked away. 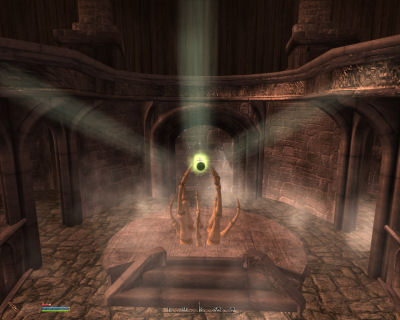 The fourth area led down to a small, rocky, well-like chamber, leading down still further to a water filled tunnel. A chest contained what seemed to be a water breathing potion and I guessed that my challenge was to swim through the tunnel. Unsure of what lay ahead of me I drank the entire potion and dove in. The murky tunnel seemed to be leading me down further and further. As I continued to swim I began to worry about the longevity of my potion as I was already quite far beyond the normal capacity of my lungs. Finally, at the end of the long, dangerous swim I found myself in a damp, but somehow mostly dry cave containing another of Henantier’s missing elements.

Once again I stood in the twisted, dreamworld rendition of Henantier’s house and was again approached by Henantier. Thankfully he seemed to finally have his wits about him. He told me that he now understood where he was and, better yet, why I was there with him. I said that we should leave immediately. Before I could reply and ask him how we should accomplish this I was waking upon the bed in Henantier’s house – Henantier’s real house. Kud-Ei, who had been patiently watching over us, rushed to Henantier’s side as he sat up and rubbed his eyes.

Later after we had both gathered ourselves Henantier thanked me for the assistance over a warm glass of cider and offered me a selection of picks from his spell scroll collection as a reward. Some of these scrolls would be useful for my own arcane studies and the others I could surely trade for a tidy sum when I returned the Imperial City. Another job well done, even if it was only a dream.