Lately I’ve been playing more PC games than I had been thanks in part to finally getting my first Xbox 360 “red ring of death”. Luckily I (barely) made the warranty so I got a replacement free of charge. While that was being taken care of though I’d been focusing most of my precious gaming time on games that I could pick up and play quickly and in relatively short bursts such as Battlefield: Bad Company 2 multiplayer. I’ve also been playing a little bit of Defcon which I’ll probably talk more about in the next one of these. The game that has most captured my attention lately though is Audiosurf. 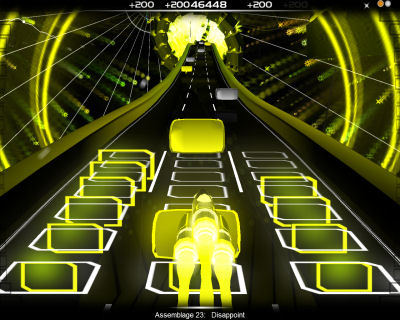 “Can you forgive me? I never knew…”

Audiosurf has actually been out for a while now (2 years now?) and I had heard only great things about it, mostly on gaming forums and the like. In fact based on those recommendations I’ve almost purchased it on several different occasions. I finally bought it as somewhat of an afterthought during the last big Steam sale and now I’m wondering what exactly my reservations could have possibly been. It’s a total mystery.

I absolutely love music. It has been a nearly constant companion of mine since I was a kid. It has helped me through so many of the bad times in my life and was usually involved in or at least present for the best ones as well. These days are no different and I’ve been digging out a lot of my personal classics for some much needed escape recently. Enter Audiosurf… 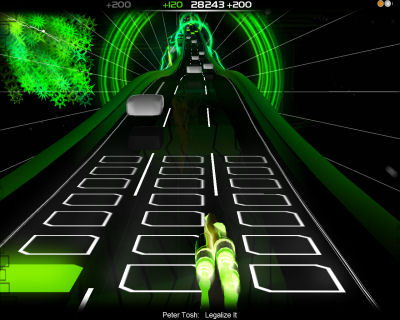 “And I will advertise it.”

Audiosurf is like the display of a graphic equalizer or some other, equally effective form of music “visualization” that, while nimbly dancing through the rhythms of your favorite songs, tripped and fell into the nightmarish dark void of a sci-fi space epic effected by an unhealthy dose of psychedelics. That’s what Audiosurf is. Wait… what the fuck did I just write? Let me start over.

Audiosurf analyzes music and dynamically maps it fairly precisely to a represent a race track, using the tempo to dictate the turns, curves, and elevations of the track. The tempo will also control how fast you move during your trip. It uses other sonic blips, typically those caused by instruments of course, to add other elements to the track – rings you fly through, colors and shapes bursting through the space all around you. Most importantly though Audiosurf uses some of those audio queues to fill the track with little blocks which make up the core of the actual gameplay itself. You steer your small craft along this funky space highway (which as an aside brings back fond memories of SkyRoads) avoiding and gathering these tiny colored blocks to the rhythm of the music in an attempt to combine them into a unit which will then grant you point bonuses, not unlike block stacking in some puzzle games. 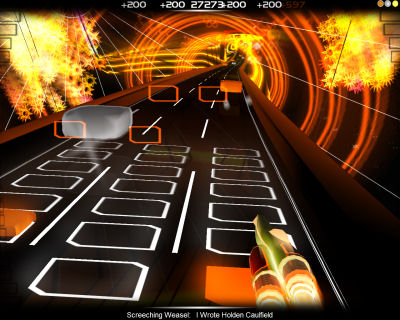 “Stop crying for what you’ve done… it’s only the past… it’s only life.”

So yeah, it sounds like a neat toy right? Actually it is surprisingly compelling. I find myself wanting to play just a song or two and end up playing a 7 or 8. Why?

First of all, as I implied, the visualization is actually quite good, depending on the song of course. You really feel like you’re riding the rhythm, moving your ship to the beat to hit the blocks representing it – it is often extremely effective. I find myself playing it in full screen and getting lost in it quite easily. Crucially, not only can you use Audiosurf’s built in “radio” soundtrack but you can pick any song from your hard drive in a variety of formats. It even has direct iTunes and Last.fm support. Screw buying songs you already own as in Rock Band or Guitar Hero and while we’re at it screw being constrained by the music tastes of others! Play whatever you want! Finally, when you complete a track your score is uploaded to a central server where you can see what other people achieved on the same song. This adds a whole social element to the game which I find quite intriguing especially when it comes to the aspect of representing your musical tastes. I’m personally the “champion” of some pretty obscure stuff though I of course owe that in large part to a lack of competition. 😉 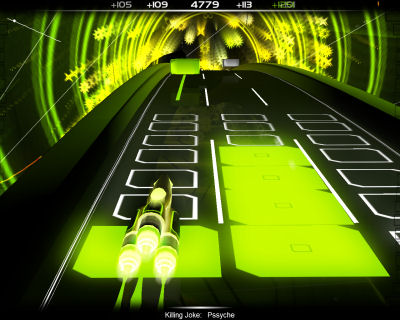 “Dodge the bullet or carry the gun… the choice is yours!”

There are a few different game modes all based on that same theme. I prefer the “mono” variety as the easiest to really zone out in and focus on the music itself – you still have some potentially challenging twitch gameplay but you don’t need to focus quite as heavily on what is going on nor deploy any advanced tactics to score well. In fact I enjoy zoning out and getting into the music so much this way that I intend to play through all new albums I buy from now on.

Songs with drastic tempo changes tend to make for wilder rides, and as I said some songs are interpreted a bit better than others, but most people who give Audiosurf a try tend to come away impressed. You can usually find it for sale on Steam and its regular price is only 10 bucks. Check it out!