After a relatively uneventful journey back up to Northern Cyrodiil I arrived in the snow covered streets of Bruma and wasted no time warming myself up next to the hearth in the Mages Guild guildhall there. Jeanne Frasoric, the head of the Bruma Mages Guild, had heard that I might be arriving soon and casually told me about the job I was to perform for my recommendation. One of her mages, J’skar, had been missing for a few days and she wanted some assistance locating him. Slightly annoyed, I recall thinking to myself that it seemed like a lot of guild members have issues with losing things and/or themselves. Still, I accepted the task and pledged to find J’skar. 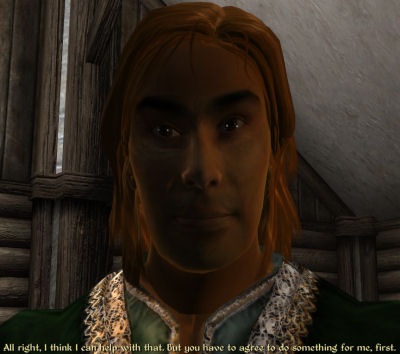 “*clears throat* I’m not sure the Mages Guild is going to be worth it.”

This task could lead me anywhere. Indeed, even if J’skar had come to an unfortunate fate here within the city walls he could still be buried at the bottom of a snowdrift, totally hidden. Regardless I started where I usually start, by asking other guild members. While most of the mages I talked to seemed genuinely ignorant enough, one of them, Volanaro, confidently told me that he could help me find J’skar if I helped him out first. I was a little taken aback by the gall he displayed but I was intrigued enough to simply follow along with him. Volanaro seemed to be pretty put out with Jeanne, suggesting that she wasn’t at all qualified for her position within the guild. He wanted me to help play a prank on her. He suggested stealing her manual of spellcraft out of her office since she was apparently fairly worthless without it. This seemed harmless enough as long as I could do it without getting noticed so I agreed.

Luckily Jeanne’s office was fairly secluded so it was trivial to wait around for her to become distracted and creep in. Just as Volanaro suggested, I found the book in one of the drawers in her desk. I made my way back downstairs and subtly made the hand off to J’skar who seemed absolutely tickled with himself and the successful completion of his scheme. He told me to meet him in the guildhall basement later that night. After I greeted Volanaro he cast an unfamiliar spell and J’skar appeared before me. Both men started laughing, pleased with themselves. Apparently J’skar’s little disappearing act was also a prank on Jeanne. Fair enough. I thought that the whole rouse was a little on the silly side myself but Jeanne was pleased enough about J’skar turning back up so I held my tongue about the details and accepted my recommendation.

My next stop was southwest to meet Teekeeus at the Mages Guild guildhall in Chorrol. Teekeeus told me that an excommunicated sorceress named Earana had been spotted around town and wanted me to find out what she was up to. She was believed to be staying at The Grey Mare inn near the southern city gate. I headed off in that direction. Surprisingly I practically ran into her as she came sauntering out of the front door of the inn. While at first seeming incredibly annoyed with me over the incident Earana, recognizing my adventurer’s garb, quickly changed her tone and asked me if I was available to take up a job. Why, of course I was! 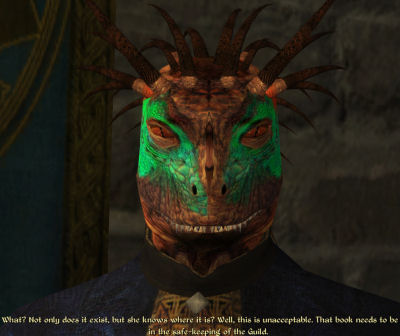 Earana wanted me to help her find an old tome of magic called “The Fingers of the Mountain” which she believed she had tracked down to the ruins of a temple called “Cloud Top” nestled in the mountains north of the city. I agreed to the task and told her I’d set out immediately though in reality I took a quick detour back to Teekeeus at the Mages Guild to let him know what I had discovered. Teekeeus wanted me to appear to go after the book for Earana but to instead bring it to him once I had retrieved it. While he didn’t elaborate I got the distinct impression that the book was something that he didn’t want falling into her hands. I wondered what Earana could be up to but at that point it had little to do with my task. 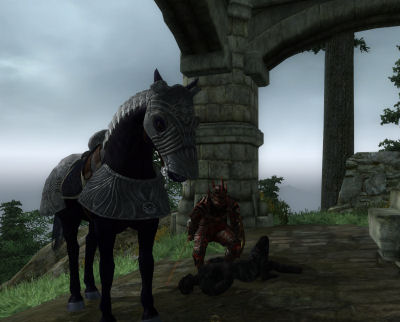 “Luckily the book wasn’t quite so crispy.”

Following the vague directions that Earana gave me I slowly rode the hunting trails leading up into the mountains until I located what had to be the temple. Like most of the ruins scattered around Cyrodiil there wasn’t all that much to see: some old stone arches, pillars, and sections of crumbling walls. I paused for just a moment before starting on my task to take in my surroundings. The temple must have held quite a commanding view for whoever inhabited it. I carefully searched the ruins, sifting through the dust covered rubble and prodding the burnt and dried corpses that littered the area. I found what I was quite sure was the tome on one of the lesser charred corpses, still quite intact.

Upon returning to Teekeeus I was thanked and promised my recommendation. Not wanting to be involved in whatever feud was no doubt about to grow a little more interesting between the Earana and Teekeeus, I quickly left Chorrol. 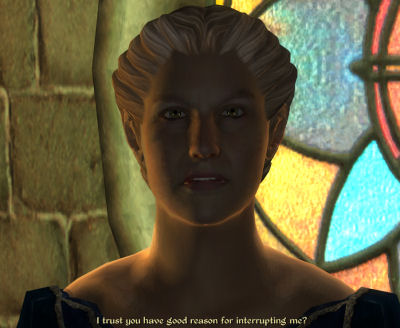 “I trust you have good reason for being a total bitch?”

West in Skingrad I was referred to Adrienne Berene for my recommendation. Adrienne seemed quite preoccupied by some research she was performing but despite being a little short with me she was still able to quickly think of a task for me to perform for her. One of the guild members, Erthor, had borrowed some notes that she needed back yet she hadn’t seen him around lately. After asking a few of the other mages at the guildhall I was able to confirm that indeed Erthor hadn’t been around for quite sometime. It apparently wasn’t all that unusual for him to be away for short periods of time though as Adrienne had him banished to a cave outside of the city to practice his dangerous summoning research after an “unfortunate” incident involving several scamps. I was intrigued, I admit. 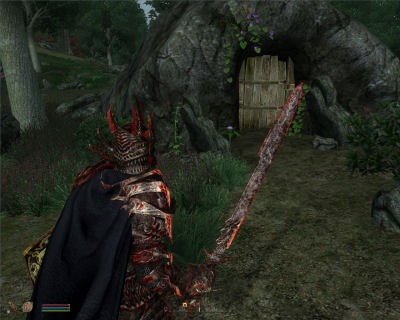 “Another day, another cave…”

I rode out to Bleak Flats Cave to find Erthor. What I found when I lit my torch and ventured into the cave, however, was a horde of zombies milling about the place. The one closest to me turned and lunged before I had any time to consider my options. I dove into a corner, dodging the zombie. When I rolled back onto my knees I blasted a fireball at the foul thing. Of course by now all of the zombies in the room were now attracted to me also. I stood up, unsheathed my sword and raised my shield. Compared to me these animated corpses were nearly helpless though what they lacked in skill or tactics they nearly made up for in raw aggressiveness. Nearly. After the slaughter I continued to explore the cave. 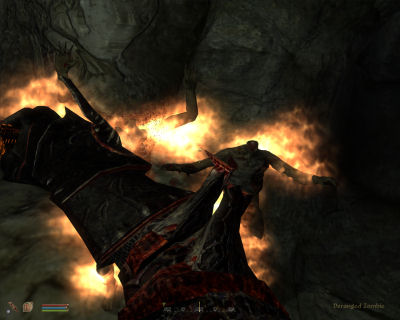 “Time to stop drop and roll…”

I ran into several more zombies before finally breaking into the room where Erthor had holed up. He was overjoyed to see me and seemed to be in a hurry for an escort back into the city. The ride back was tense. Erthor had little to offer by way of explanation for what had occurred in the cave but I knew more than enough about the arts of conjuration to guess. Upon reaching the guildhall he and Adrienne had a brief conversation which sent him away with his tail tucked between his legs. Adrienne coldly informed me that Erthor seemed okay and that my recommendation would be sent in as soon as she had the opportunity. 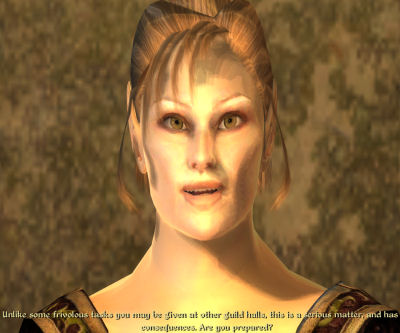 “Thank the gods, finally some action from this boring guild.”

I continued west to Anvil, the last guildhall I’d need a recommendation from. Not only was this to be my last stop but it was also finally an interesting task. I was beginning to think that the Mages Guild wouldn’t have much to offer me after all. Carahil, the head of that particular guildhall, informed me that there had been a large number of killings along the Gold Road outside of the city and that signs pointed to it being the work of a rogue mage. Carahil already had something in mind about how to find and take care of the assailants but it would require the work of an unknown person. A new Mages Guild Associate like me was the perfect candidate. I was to meet an undercover Breton Battlemage named Arielle at the Brina Cross Inn just outside of the city that very evening.

After a short ride I tied up my horse and started to walk into the inn when a woman stopped me and whispered to me to get a room for the night. This had to be Arielle so with little more than a head nod to acknowledge her I continued inside and took a seat at the bar. I bought an ale and a room for the night and hung out casually taking in my surroundings for a bit. Some of the other patrons made small talk with me though nothing unusual outside of me telling a couple people that I was a traveling merchant instead of my usual vague responses about adventuring. After finishing my drink I bid those in the taproom a good night and headed upstairs to my room. Not long after I laid down Arielle slipped into my room and finally identified herself. She told me of the simple plan they had hatched. I was to sleep tonight and then set off at sunrise back east towards Kvatch. They would shadow me and quickly reveal themselves if I were approached. 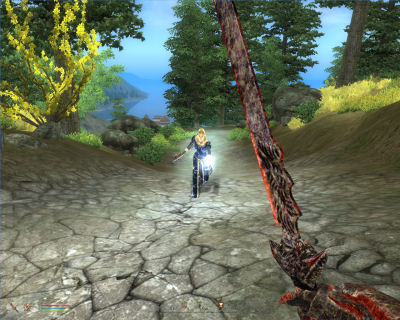 The next morning I set off on foot. It was only a matter of time before an Altmer woman approached me from the opposite direction and, without warning, unleashed a powerful blast of lightning from her fingertips. My reflexes were instant and I dodged out of the way of the bulk of the blast and drew out my blade. A normal highwayman might now be concerned about the fact that I was drawing a weapon, never mind the type of weapon I was revealing, but this rogue mage seemed unconcerned as she sent another bolt of crackling electricity towards me. It was just about this time that I realized I recognized the women. It was one of the patrons in the taproom from last night! Arielle must have had her suspicions, that obviously explains this ruse. Speaking of Arielle, it wasn’t long before her and another Battlemage came running up the road, weapons drawn. My attacker, now both outclassed and outnumbered, quickly fell due to our combined attacks.

While I found it unusual that a mage would expend so much energy on petty robbery and murder Carahil was quite pleased with my work and told me that my Anvil recommendation was sealed. I was done! Now it was only a matter of venturing back to the Arcane University for my promotion and my first assignment.