I’ve been wanting to play this damn game since its pre-release hype train first started rolling down the tracks. First of all, I definitely consider myself a fan of the Grand Theft Auto series and Rockstar Games in general. Second, a Western? A serious, open world Western done by a studio I like, using proven tech? Sign me up, right? Third, after its release the game got more or less lauded by critics and gamers across the board. Actually, the fact that the game (shamefully) never made it to PC is one of the few things brethren of the “PC Master Race” have to be jealous of the unwashed console masses over. So, yeah, this game has definitely been high on my list for a while now.

So, at long last… 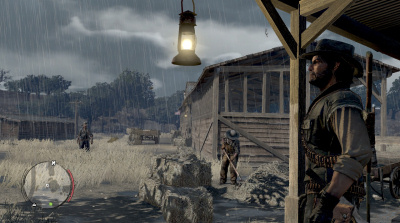 “John Marston, brooding in the rain…”

One of my first impressions was my surprise about just how damn slowly the game takes off. Sure, the first plot point is early and suitably dramatic but after that? Molasses city. Worse yet, I felt a little bit of that old open world “err, what do I do now, and why do I give a shit about doing it?” feeling set in almost immediately. Another factor here is the engine. GTA 4’s engine (which Red Dead Redemption uses) is beautiful and impressive in many ways, but it feels seriously clunky in some others. Shooting, riding horses, hell, just walking around can feel a little awkward sometimes with getting stuck into odd looking animation loops or clipping through objects in weird ways probably the most common offenders. As I concluded with GTA 4 years ago, once you get used to the engine’s “feel” and some of its idiosyncrasies it’s just fine, good even. Besides, blowing a bandit off his horse with your revolver feels magnificent. That lead up definitely hurts the early game though.

So I wasn’t quite as impressed as I thought I’d be at first. Boo hoo! Soon though, the absolutely incredible execution of Rockstar’s world crafting started to steer my opinion back around. The rolling plains teaming with wildlife, campfires in the Mexican desert, seedy frontier towns filled with whores and bandits, and other appropriate tropes of the genre are all here and feel just great. The immersion started taking hold to a serious degree as I found myself riding my horse from location to location more appealing than the various “fast travel” options and being overly concerned with Marston’s wardrobe and preference in firearms. As I’ve mentioned here before, being able to feel deeply immersed in a game world tends to be one of the more compelling factors in whether or not I’m going to love a game and have no doubt, this is where RDR shines the brightest. 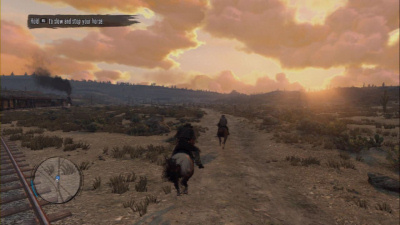 “The environments are damn beautiful, in an empty sort of Western USA kind of way.”

I would definitely have to say the game’s serious tone has a lot to do with this. GTA 4 was mostly a serious affair but served with a massive side of the often not-so-subtle satire the series is known for but RDR is almost entirely straight-laced. So focused in fact, that while your character is free to go on murderous rampages if you desire (apparently not too out of character given his outlaw past, though that is debatable) he has absolutely no interest in patronizing the local working girls due to being a dedicated husband. Wow, is this the same Rockstar?

I wouldn’t go as far as to say the game’s writing is anything amazing, however. I mean, the game is filled top to bottom with clichés from classic Westerns and while this mostly feels like honest tribute from fans of the genre, I feel like a few of the characters I encountered early on were walking stereotypes. This is a common trait of Westerns though, even in some of the more acclaimed modern movies, and the few characters that develop into being likeable and fairly interesting (John Marston, our protagonist, chief among them) more than make up for that. One of the bigger underlying themes of the story, the death of the “old west” as it is an allegory for the way we grow and change, is fairly well worn as well. It could have still been a damn fascinating theme if delved into a little deeper. Shame that. As an aside, this game has got me absolutely fiending to watch gritty modern Western movies like nothing else. Argh! 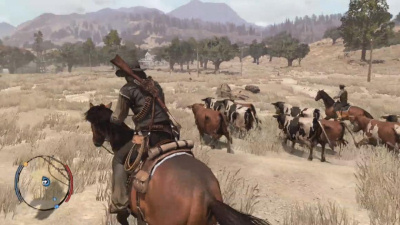 “Herding cattle is just one of the many tedious virtual jobs you can toil away at.”

One last, minor disappointment is with how damn similar this game plays (mechanically speaking) to any other GTA inspired open world game. Sure, you’re on a horse in the plains instead of on a Faggio in Liberty City, but damn! Part of me would actually much rather this game have been a much shorter, more focused experience that took chances with some different mechanics. It would have probably lost something in that, sure, but the déjà vu I felt while racing from point A to point B while trying to shoot all of the red dots on my mini-map certainly detracted from the experience if only a little.

Finally, I know it’s been spoiled a million times over now but I’ll still avoid mentioning specifics: I thought the unconventional structure of the ending was quite interesting. The game continues on after it would seem like a typical place for it to have concluded and does so more than once! Not in a “ha ha, got you!” kind of way, it’s actually fairly consistent with the rest of tone of the game. I’ve yet to really decide whether this was a good thing or not (I can’t stand playing a game when it feels like it’s worn out its welcome and false endings definitely don’t help) but it is fun to think about in any case.

Anyway, overall the experience was awesome. Not perfect by a long shot, but unique and worthwhile all the same. I regret not jumping into the game when it launched so I could experience the fun looking multiplayer a little but that is a common downside to clearing out one’s backlog, I suppose. Next up I’ll be playing through the expansion pack, Undead Nightmare, but first I think I need to watch another episode of Deadwood…