Martin and a couple of Blades who happened to be in the great hall when I had appeared sat me up, dusted me off, and handed me a tankard of ale. Believe me, to go from running out of a collapsing building to appearing in another world in the blink of an eye is an uncomfortable experience. Martin seemed relieved to see me, correctly taking my return to mean that I had defeated Mankar Camoran. He congratulated me on my victory and asked if I had recovered the Amulet of the Kings. Still attempting to gather myself, I simply handed the Amulet of Kings to Martin and suggested he put it on, as it was his after all. 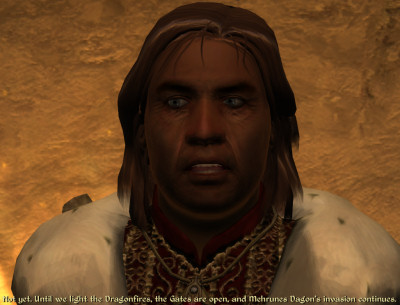 “I’d be reluctant too, did you hear what happened to the last guy?!”

The two Blades in the room each took steps back to watch intently as Martin easily placed the amulet around his neck. Martin had more or less always known he was Uriel Septim’s son since we first suggested it to him back in Kvatch but that made it official. Well, almost. Martin remained very respectful of the traditions of the empire and demanded, even in this time of crisis, to meet with the high council to secure their full blessing and carry out all of the traditional ceremonies. Not only that, but lighting the Dragonfires was more than a hollow ritual. It should, as planned, close the gates to Oblivion and end Mehrune Dagon’s invasion once and for all. Martin had already sent a messenger to High Chancellor Ocato in preparation for my return and so we wasted no time and assembled a small retinue to accompany us down to the capital. 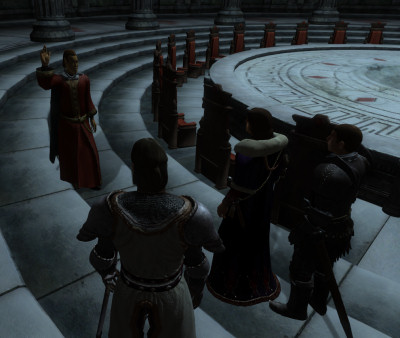 “High Chancellor Ocato swears his loyalty to his new Emperor.”

We received strange looks from both city guard and people in the streets alike as we quickly ushered Martin to the Imperial Palace. Ocato met us in the council chambers along with a few witnesses. Ocato knelt down before Martin and told us that he had already met with the rest of the Elder Council to discuss Martin’s claim to the throne and that the decision to back him was unanimous. On behalf of the council he officially accepted Martin’s claim, recognizing him as Uriel Septim’s heir. I had been through so much after the fateful day when I first witnessed the Mythic Dawn’s assassination of the Emperor that coming full circle to that moment was a huge relief. 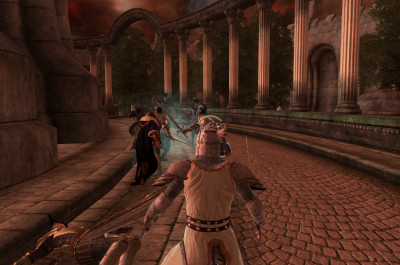 “Trouble in the streets of the Imperial City.”

Ocato, Martin, and the others ceased with the formalities and began discussing arranging the coronation ceremony when suddenly a young guardsman came bursting into the council chambers screaming in alarm. The guard collapsed before he could deliver the message in its entirety, 2 Daedric arrows sticking in his back. Everyone in the room instantly drew their weapons and not too late, as Dremora soldiers rushed in immediately engaging with the palace guards at the door. I, along with the other Blades, made escorting the Emperor and the High Chancellor out of harm’s way our highest priority and after dispatching a few Daedra found ourselves back out in the streets of the Imperial City.

The situation was worse than first feared. There were multiple Oblivion gates opened throughout the city itself, buildings on aflame, and groups of Daedra pillaging and marauding through the city streets. It was suggested that we return to the relative safety of the palace but Martin instead ordered us all to fight our way to the Temple of the One so that we could light the Dragonfires. In retrospect, that was probably the only sensible reaction. 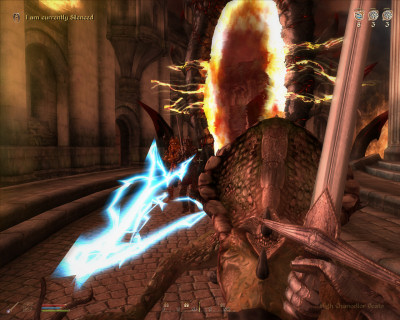 With the amount of Daedra pouring through the gates the fight to get the temple was incredibly chaotic. Few of the city guard who hadn’t served in the Imperial Legions since the Oblivion Crisis started had ever had to fight Daedra and many of them fell due to their inexperience. Still, there were enough soldiers and Blades around us that we eventually made it to the Temple District. The district was filled with a dense, black smoke and the combined cacophony of screams, cries, roars, and clashes of steel on steel only added to the confusion. Then as our group rounded one side of the temple things got even worse – Mehrunes Dagon! 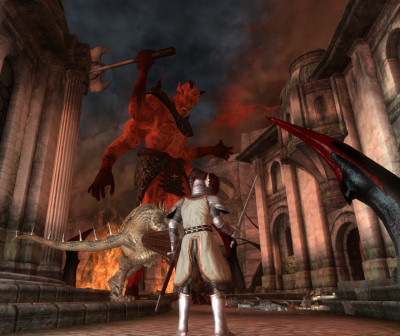 “Actually Martin, I need to split. I’ve got an appointment… or something. Yeah.”

The Daedric Prince himself had broken through the barriers that had protected us from Oblivion and taken on a physical form in our world. We had run out of time – our plan had failed. Summoning the last bit of desperate hope the soldiers with us could muster we all raised our shields and huddled in a corner to come up with a plan. Lighting the Dragonfires could no longer help us but I asked if, since the Amulet of Kings was an artifact of Akatosh, its power was still of use. That was when Martin came up with a genius plan. He ordered us to get him to into the Temple of the One. 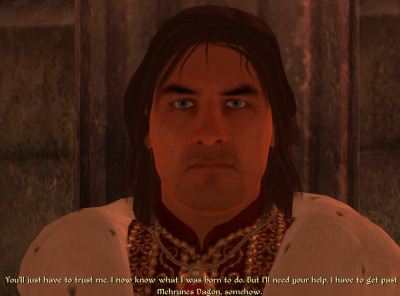 “A plan so cunning you could pin a tail on it and call it a fox.”

Getting the Emperor into the temple was no small task as Prince Dagon stood near the front door fighting off a small group of Imperial battlemages who had been ineffectively peppering him with spells. Soon our careful advance was broken by a swarm of Clannfear and Daedroth that viciously knocked three of our men away, causing many of the others to run in fear. As the High Chancellor broke off to help Martin and I pressed on, running past much of the fighting in the streets, sneaking around the menacing Daedric Prince, and making it into the temple.

Inside Martin began to reveal his plan to me. He would shatter the Amulet of Kings, mixing the divine power of Akatosh with the Dragons Blood of the Septim line. I questioned what exactly he thought would happen but we were interrupted by a heart-stopping booming noise coming from the roof of the temple. Martin and I both looked up to see a large section of the temple’s roof and outer wall give way, and the towered physical manifestation of the Daedric Prince peering in at us.

Before I knew it I was blinded by an intense white light as Martin was enveloped in the scattering beams of intense divine power, and then a pillar of flame rose up from where Martin had just stood. The flames quickly rose up, higher and higher, and then, incredibly, took the shape of a great dragon. There was a brief moment of still as the Daedric Prince stared at the flames curiously, interrupted as the flames parted to reveal head of an actual golden dragon. It struck out at Mehrunes Dagon, letting loose a massive jet of flame breath. 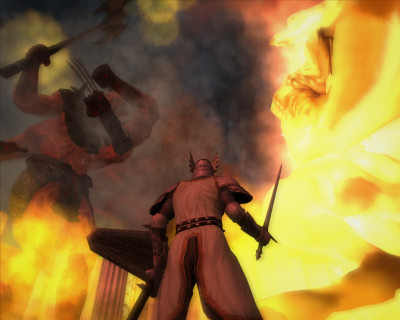 “The Avatar of Akatosh delivers a divine beatdown.”

In the most incredible battle I or indeed anyone in the Imperial City that day had ever seen, the towering Daedric Prince and this amazing avatar of the divine Akatosh traded blows. The fight seemed even enough but where Prince Dagon seemed to suffer from his wounds the dragon barely reacted to being struck. With that it was only a matter of a few more successful strikes until Mehrunes Dagon sustained enough damage that he was cast back into Oblivion. The dragon, perched atop the center altar of the temple, let out one last victorious roar and then turned to stone. 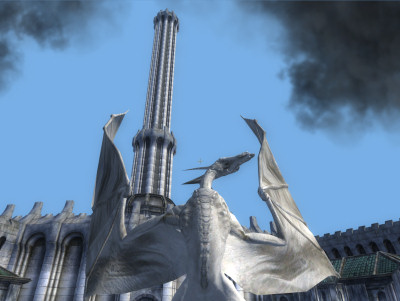 In an instant all of the Oblivion portals in the city flickered out, their rocky supports crumbling into pieces, the remaining Daedra in the city were seemingly also cast back into Oblivion, and the black smoke that had choked the city’s center began to part revealing blue skies once again. It seemed that not only had Martin’s plan defeated Prince Dagon but it had also restored the protective barriers that separated Mundus from Oblivion, creating a new divine artifact in the process. The city, indeed, our entire world, was safe.

I sheathed my sword, took off my helmet, and began walking away. High Chancellor Ocato stopped me, asking what happened. After I explained the situation he was, of course, heartbroken about losing our new Emperor. He assured me that the Elder Council would find a way, and that Martin’s sacrifice would not go unrecognized. He had been one of our most heroic Emperors, even if Emperor for such a short time. He also recognized me for my part, proclaiming me Champion of Cyrodiil. I was honored but I could only think of all of those who gave up their lives during this struggle: Martin, Jauffre, and Baurus to name only the few I knew personally. I was tired. It had been a long, long journey, and I hoped that it had finally come to an end. 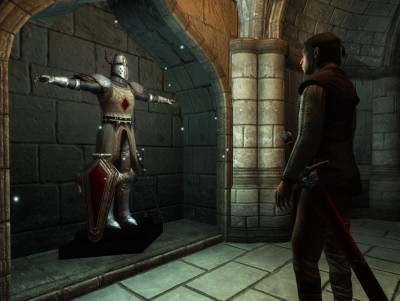 “Hanging up my sword and shield.”

With great fanfare I returned back to the Priory of the Nine. After a brief celebration I went to the Priory’s armory to return the Crusader’s Relics. I had hopes that Pelinal Whitestrake could guide another to take up the cause if ever such a need arose again. While I would continue to oversee the Knights of the Nine and help the people of Cyrodiil wherever I could, my adventuring days were over. I had seen the deaths of two emperors, been in the middle of struggles between the gods and demons themselves, and seen more than my share of all of the good and bad that his world has to offer.

And that is how I ended up here, to tell this story…

Well friends, at long last, with the closure of the Oblivion gates and the completion of Oblivion’s main quest, Garn’s story also comes to a close. Stay tuned for a special epilogue in which I’ll share some behind the scenes details some people have asked me about over the years. Special thanks for my few, dedicated readers!