So, after a pretty sporadic schedule of playing I finally managed to get all the way through my first Borderlands co-op game, finishing the story and every available side quest at around level 36. 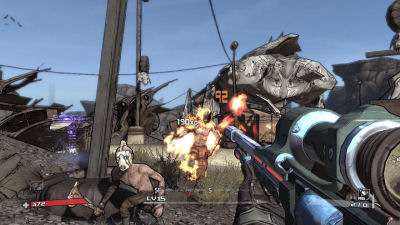 “If there aren’t really roving bands of angry midgets bandits in the future I’ll be soooo disappointed.”

The ending was a bit of a let down – if you’ve ever read any forum threads or news comments on the game then you’ve probably already seen a bunch of people complaining about it. I didn’t think it was that awful though I suppose I didn’t exactly have high expectations given how bad the game seemed to be at narrative throughout. Without spoiling anything let’s just say that the ending isn’t what most people would expect it to be, and even the best explanations of what went down still leave various questions on the table. The best and most likely explanation is that the story parallels the myth of Pandora’s Box but even that isn’t extremely fulfilling. Like I said though, Borderlands isn’t exactly a game you play for the story. The silly blocks of quest text coming from mannequin-esqe NPCs would have left much to be desired if shooting and looting weren’t so much fun. 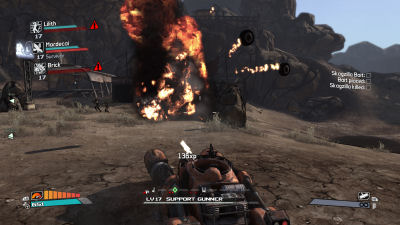 “Much less fun when you’re on the receiving end.”

I wasn’t super happy with the loot system. It’s pretty badass, no doubt, but from the mountains of loot we got it seemed like I rarely ever found an item that was a worthy upgrade. I would have preferred finding “good” items just a little more frequently. It just needs to be tweaked a little. I never did find a support machine gun with both high damage and a good rate of fire, and it took 10s of levels between each of my shotgun upgrades, for example. It kind of left me itching to play Diablo 2 yet again, to be honest. 😉

I have some other complaints about the game too, but nothing too major. It was a fun co-op experience, fun enough that I wouldn’t mind experimenting with second playthroughs and other classes if some parts of it weren’t so tedious to think about replaying. When I get an upgraded hard drive for my 360 (sometime very soon, I hope) I’ll definitely be buying and playing through the Zombie Island and Secret Armory DLC expansions. I’m actually probably more hyped up for the possibility of a proper sequel.

As usual for 360 games, not my screenshots. Pretty sure these are from some official PR releases.