I’m down two more Xbox 360 games from my oh so intimidating backlog of games.

First, I finally got around to playing through Gears of War 2. I did so cooperatively and I have to say it was a pretty polished and fun experience. The game still has excellent graphics despite its age and whether or not it does anything for you personally, a unique visual style. As a sequel it felt like “more of the same” of the first game in pretty much every way. Of course, I haven’t played the first game for quite a long time so that impression might be slightly skewed. My only real complaint other than the typical observations about the meathead characters and hole filled plot was that as a cooperative game I’m not sure I appreciate the designers’ decision to constantly try to separate the players by making them take separate paths. I’m pretty sure they were attempting to force you to work together by completing different but related goals to help foster some kind of greater feeling of cooperation but more often than not it just garnered a disappointed “aww, they’re making us split up AGAIN?” response from us. It felt like the game was attempting to keep us apart half the time and exactly what kind of co-op experience is that?! 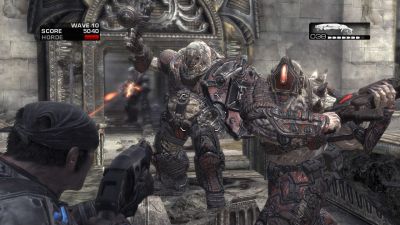 “Football sure has changed in the future…”

I also dusted off my copy of Tom Clancy’s Rainbow 6: Vegas 2. Damn, that’s a long title.

Immediately Vegas 2 came off as very dated compared to most newer FPSes. It took me a while to get familiar with the controls which work fine for the most part but are definitely different enough from the Halos and Call of Duties of late to screw you up for a bit – I chucked plenty of grenades at my own feet early on. Once I got over that curve I started to appreciate the brutal, tactical nature of the combat over any lack of modern polish. I haven’t talked about it a lot here since I haven’t played much of it lately but I am a big fan of the more realistic, Tactical FPS genre of games so I suppose it started scratching an itch that I haven’t had scratched in a while. Having overcome that I struggled to remember how the hell the story of the first game ended. I knew it ended with a “To be continued…” sort of thing but Vegas 2 definitely doesn’t pick up feeling like a direct continuation. Then again this is a Tom Clancy brand game and I’ve played enough of those by now to not have to worry too much about the story.

While I had a lot of fun ordering my squad mates around, clearing rooms with well-timed flash-bangs and flawless shots through thermal goggles, sniping from afar in the pitch dark, and otherwise being on the enjoyable end of a lot of face pwning, it wasn’t all puppies and rainbows. I actually became quite frustrated with the game more than a few times during the run. Silly stuff, like unevenly placed checkpoints, including a major pet peeve of mine: checkpoints right before scripted events or cut scenes. Probably the most of annoying of these was right before the final major firefight of the game. I must have had to watch that damn thing play out 20 times before finally surviving the fight long enough to make it to the end scene of the game. Most of the checkpoints were placed decently early on but it definitely seemed to go downhill the later into the game I got. 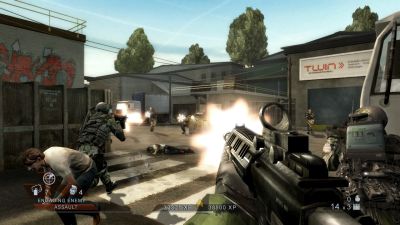 “Rainbow 6 prefers to conduct most of its firefights in crowded city streets.”

Of bugs, the generally fairly well received cover system of Vegas seemed a bit less reliable in Vegas 2 than I recall it being in the first game. I found myself flipping out of cover, leaning out of cover on my own, and generally not behaving as expected a bit more than I was comfortable with. This seldom resulted in any fatalities though so I guess I can’t bash on it too much. I also ran into one part of the game which I had to replay about 5 times due to the cut scene at the end the level not triggering after completing my object of clearing an area despite wasting tons of time trying every trick in the book to avoid having to reload. Arghhhh!

Your squad mates are still hilariously stupid at times. They often fail to do a good job checking corners when entering rooms or taking up good defensive positions when ordered to move to certain places which contrasts sharply to how well they do these things at other times. Probably my favorite example of their stupidity is that when one squad member is injured (which itself is frequently the result of something pretty shockingly dumb occurring) the other will usually make their way their location as if to secure them BUT won’t actually try to save their life without being manually ordered to. This can create some pretty tense situations if you decide to split yourself up from your two squad mates to employee some more creative flanking tactics, as the game encourages you to do from time to time. Dashing around to try to get a clear shot of my downed team mate to issue the “heal” command in time resulted in at least a few deaths of my own during the campaign… oh, and despite how easy it is to heal your squad mates they’re apparently completely incapable of healing you. Why?! Oh, I guess because you’re not alive to explicitly tell them to. Pfft… 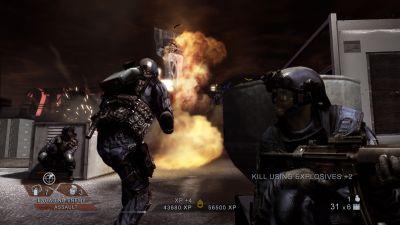 “My squadmate decides to investigate an explosion face-first while I intelligently take cover behind a barrel of highly flammable liquid.”

My other biggest complaint about Vegas 2 is probably the difficulty. Yeah, yeah, I know I just praised it for its brutal combat two paragraphs ago, but honestly, damage and ballistic models aside, most of the more difficult sections of the game felt only difficult because of the sheer number of enemies they pack into some of these areas, and most often, the absolutely painful choke-points and scripted scenarios they expose you to along the way. In other words, it oftentimes only felt difficult because the designers’ went out of their way to make it overly difficult in those particular spots. I’ve said it before and I’ll say it again: a good Tactical FPS doesn’t need a ton of enemies to be fun! If the damage and weapons models are “realistic” enough, 2 enemies in a room is a challenge… and that challenge usually feels much fairer than, say, the scripted hordes of unlimited NPCs games like Call of Duty 4 throw at you. Combining that, however, with having to have your 3 man squad off 50 terrorists in one level encourages you to run through quickly rather than carefully entering and clearing rooms, only adding to potential frustration while minimizing the tactical gameplay the series is supposedly built around.

Despite all of those negatives playing through Vegas 2 did in fact feel fairly satisfying and refreshingly different alongside other FPSes I’ve played through recently. I highly doubt I’d volunteer to play through it again anytime soon but it might indeed inspire me to play through some of my favorite oldies such as SWAT 4.

Ahh, one last thing… when I played the original Vegas I didn’t have an Xbox Live Vision cam so I couldn’t test out the awesome ability to map your own face to your in-game character. Thank god for that! After my several attempts to get it working at all I was greeted by some horrible looking, wax golem-like facsimile of myself. Yes, even more hideous than the real thing. Yikes!

As usual for console games, not my screenshots.