Another Xbox 360 game slowly but surely scratched off of my seemingly endless backlog! This time it was a copy of Mercenaries 2 that I reluctantly fished out of a bargain bin for something along the lines of $10. I say reluctantly because apparently Mercenaries 2 was a massive flop and I heard enough bad things to stay far away, at least at first, even as a fan of the first game. Still, its review scores were generally good with some people even going as far as claiming it was one of their favorite games at the time. Like many such games it seems to be rather divisive as the other end of the spectrum was well represented as well. The biggest issues seem to have been related to bugs, glitches, and the like, which is quite disappointing after how polished the first game felt combined with the fact that this go round was delayed multiple times. Playing it well after its release and much subsequent patching I’m guessing that some of the worst of these issues have been long since resolved as despite a few oddities here and there, my game was relatively glitch free.

Like Mercenaries: Play Ground of Destruction, Mercenaries 2: World in Flames is essentially a Grand Theft Auto 3 clone which has the unique spin of being set in a war zone filled with all kinds of potent military weapons and vehicles. When over-simplified and distilled to that level it is quite easy to see its appeal, eh? Still, the games make many other both subtle and not-so-subtle changes to the GTA formula which help distinguish it… but, honestly, while playing it I couldn’t help but feel that part of the charm of the original was simply that it was a really well executed GTA3 style open world game which, at the time, there were very few of, yet this generation there are an almost stifling number of similar open-world games on the market, and Mercenaries 2 has some trouble keeping up with the pack in some areas. 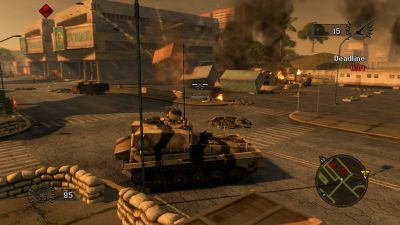 When I first loaded the game up I was a bit surprised with the menus and the presentation in general – it seemed quite polished and well designed. Once in the world the game started to show its cracks a little more, with graphics that at times looked… I don’t want to say last gen, but definitely early this generation – lots of pop-in, some odd, janky things going on with textures and lighting sometimes, etc. The one thing, graphically, the game does do really, really well is the explosions which, considering how important they are to the game, is a damn good thing. They’re the best I’ve seen in this type of game and combining them with the engine’s destructible environments (a feature I hope gets more and more common in new games) makes for a lot of incredible, large scale action.

Back to the action, as I hi-jacked my first attack helicopter and began rampaging through a Venezuelan city I thought “Wow… this is just as good as the original. Awesome!” and wondered where all of the negative reviews came from exactly. Unfortunately as I played more and more I ran into more and more tiny annoyances that started to slowly build up over time. Things like how utterly daft the AI was, having civilians walk out in front of my car causing me to lose money and enemy soldiers firing RPGs pointblank at me… while I was standing next to their commander, even. As an aside because of how insanely chaotic the combat can be I QUICKLY gave up trying to capture High Value Targets alive. I’m pretty sure I’d still be only half way through the game and missing half of my hair if I hadn’t since they often have a way of dying even when I’m being exceedingly careful around them. Back to annoyances: how, after amassing a good stockpile of them, I found the majority of the game’s much celebrated airstrikes’ usefulness to be extremely situational at best since you have to pretty much be at ground zero to throw a smoke grenade or drop a beacon where you want one to land is also a good one. 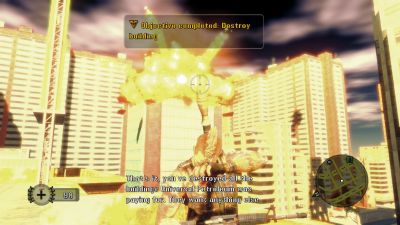 “You got some of your building in my eye! Lawsuit! Lawsuit!”

Still, this is a “sandbox” type of game (though I suspect with the popularity of games like Minecraft we’re going to stop calling simple “open world” games “sandboxes” sooner or later) which means that we always have the option of finding our own solutions to these types of problems. For instance, the airstrike thing? I found two great ways to overcome them: Put your beacon or even smoke grenade on a moving target and move it into the place you want to destroy, such as flying a chopper or crashing a jeep into a building and jumping out at the last second, though this does require some pretty precise timing. An even more interesting example: placing an artillery barrage beacon on a car and then hauling ass through an area while watching the chaos unfold behind you. The other method is a bit sneakier: use the game’s faction system to disguise yourself by jacking an enemy vehicle to deliver the bomb. My favorite method was via helicopter roof top landings. I’d buy or steal an enemy chopper, let my disguise kick in, and then casually land on or next to my target. When the coast was clear I’d hop out, throw down a beacon or smoke grenade, and then hop back in and hope I could get my chopper back in the air and a safe distance away before I ate a pair of 500lbs bombs or whatever present I was giving my little friends.

I suppose that is what sets good, or at least fun, open world games apart from not-so-fun ones: the game has to provide the players (and even the AI in some cases) with the underlying systems to let interesting, fun, emergent gameplay unfold. Mercenaries 2 pretty much succeeds on that front, providing you with plenty of tools to have a fun ride to the end. Of course, dumb but incredibly amusing stuff still happens as well, such as when I was calling in a helicopter and it landed right in the middle of the road. Just as it was landing a civilian was speeding down the road on a sports bike. The timing was perfect: just a few seconds after losing sight of the motorcycle behind the chopper, the chopper lands and I hear a satisfying “thud!” 😛 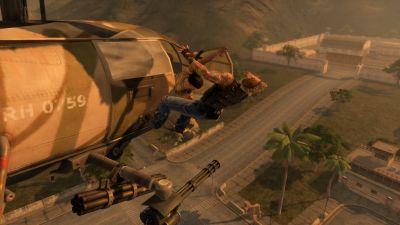 Speaking of helicopters, as with the first game their controls are simple and quite satisfying and I found myself preferring to use them as often as possible, keeping my stockpile full of my favorites at all times. SAMs and other AA can be damn annoying in some parts of the map until you start finding/buying more choppers with anti-tank missiles and get a knack of dodging them long enough to take them out. I’m still not entirely sure how you can avoid losing choppers (and even tanks) between missions nor how to repair and rearm them. I was convinced such a feature didn’t even exist at first to be honest but late in the game I was startled by the wrenching sound effect when I inadvertently repaired one of my choppers on a landing pad in the middle of an intense firefight. I think they only work if they’re both of the same faction, perhaps? Compared to other, similar games vehicles are almost treated like disposable suits of armor in this game – even if you don’t need one, or want one, hopping in one can save your life… even a crappy car. You also get the added bonus of seeing the hilariously bad ragdoll effect that happens when your character is blown out of a vehicle. I witnessed some pretty epic ones in which I was thrown hundreds of feet and twisted into all kinds of disgusting, if not physically impossible positions, only to stand up and dust myself off almost unscathed!

The game is much less stingy with money and store options than the first one, and the store is a lot easier and more convenient to use in general, though I stuck to my bad habit of being overly conservative with my spending, often opting to hijack enemy tanks and choppers rather than buy or use my own… JUST IN CASE… though I can’t really blame that on the game. I did have some bizarre glitches when ordering helicopters though – several times I had my chopper (and Ewan) vanish right before my eyes after landing, and at other times he’d simply never show despite losing my fuel and the item from my stockpile. Fuel was another annoyance, really. It always seemed to be in abundance until you really needed it, at which point you’d have to put your war efforts on hold while you went out on a savaging run. Oh, and speaking of glitches, several of the achievements I earned never popped for some reason, which is intensely frustrating for anyone who even mildly cares about such things.

All in all I found myself enjoying Mercenaries 2 a lot more than I suspected I would despite it not quite meeting all of my expectations. If you’re into this sort of game and have played some of the other bigger titles (including Merc 2’s biggest competition at this point: Just Cause 2) then I don’t see any reason not to pick this up if you can find it for dirt cheap like I did unless you simply have zero tolerance for some of the negative technical stuff I described. I certainly got my money’s worth at least. One word of caution: I’ve read that the Xbox 360 version is the best so your mileage my vary if you pick it up on PS3 or PC. I see the PC one on sale at various places for under 10 dollars frequently and, providing that it is indeed decent, I’d imagine it could be a very fun game to screw around in cooperatively if you have a bored online friend about. For a final summary, Yahtzee’s review was hilariously spot on!

As usual all Xbox 360/console screenshots stolen. I am a Mercenary after all! Oh, and for the record I played Chris Jacobs in both games.