While walking away from Rosentia’s house I was approached by a city guard. It seemed that the Count was requesting council with me. Having yet to meet the Count of Leyawiin I was intrigued but not at all worried as my dealings with city rulers so far had been largely positive. Most likely the Count had heard that a new adventurer was in town looking for work and had use for an unknown agent to do some of his dirty work. 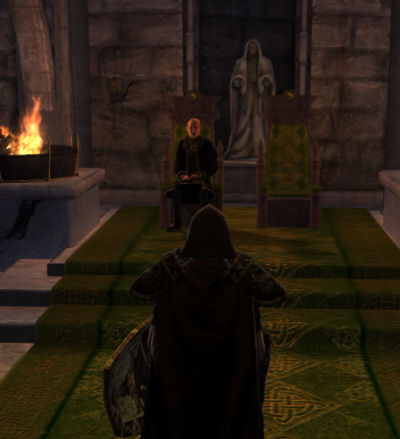 “Just sit there, you smug bastard.”

Indeed, Count Marius Caro was welcoming and seemed to be fairly frank with his statements which I respected. He had summoned me to investigate an Orc who had been hanging around Leyawiin claiming to be a knight. Specifically he wanted me to find out what she was up to. Mazoga wasn’t hard to find. Clad in full plate armor and rudely harassing the castle guard about wanting to speak to the Count, Mazoga could be singled out from a mile away. I introduced myself. 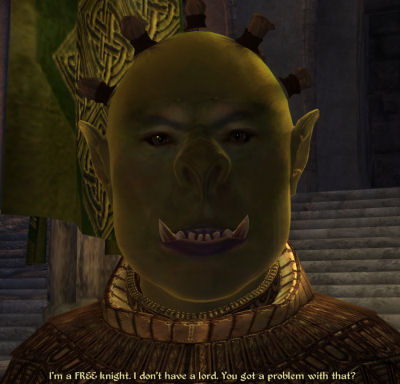 “The government does – you didn’t fill out form 32A in triplicate!”

Mazoga insisted I call her Sir Mazoga despite being female and her manners left nothing to be desired, even for an Orc. She wouldn’t give me any details about what she was up to. Instead, she bluntly asserted that I seek out Weebam-na for her. I let the count know that Mazoga was interested in Weebam-na but he wanted to dig deeper and insisted I assist her in finding him. Weebam-na was a Argonian hunter who lived within the city walls. While the Argonian didn’t seem to have a clue about what Mazoga could want with him he was curious enough to go speak with her.

“A delicate meeting of the minds.”

Mazoga drilled Weebam-na about a place called Fisherman’s Rock. While Weebam’na was familiar with it Mazoga’s rude tone and refusal to tell him why she wanted to go there caused him to decide not to guide her there. After a few more raised words the hunter left leaving the would-be knight angry and not much closer to her mysterious goal. Still, Weebam-na revealed enough about the location that Mazoga now knew where to find it. Not content with this, she turned to me and demanded that I take her to Fisherman’s Rock. Updating the Count one last time on the situation I returned to Mazoga and agreed to go with her. 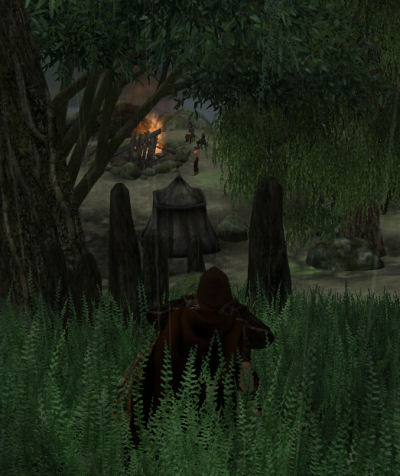 The journey to Fisherman’s Rock was largely uneventful. As we descended the hill from the Yellow Road into the woods and finally, with the coast in sight a bandit camp came into view. Surprisingly Mazoga calmly approached the bandits, whispering to me not to attack until after she had a word with the bandit leader, Mogens Wind-Shifter. At first she asked him if he remembered her. Confused, he claimed he did not. Then she asked the large Nord if he remembered her friend, Ra’vindra. Again, he didn’t acknowledge a connection. Finally Mazoga launched into a angry tirade about Mogens and his bandits killing Ra’vindra, her best friend. Swords were drawn and the time was nigh. 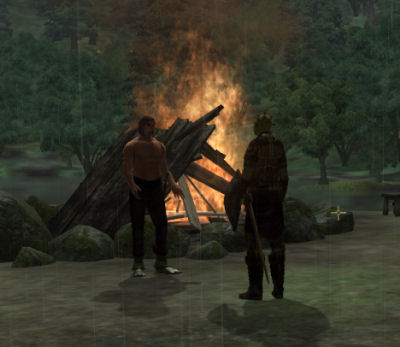 “Mazoga attempts to confuse the bandit leader before killing him.”

I quickly rushed out from behind the tree from which I was observing the confrontation and drew my sword as the gang circled around Mazoga. A massive melee ensued. Luckily Mazoga could in fact handle her own, and while the battle was not over quickly, it did end decisively. Standing over the bodies of the fallen bandits Mazoga wiped the blood from her face, told me I could have the entirety of the loot, and wandered off into the woods. I quickly searched through the camp and headed back the Castle Leyawiin to fill the count in on the what had just occurred.

Count Caro found Magoza’s self appointed knighthood, quest for vengeance, and elimination of some long troublesome local bandits all quite honorable. He offered Magoza and myself an opportunity to become Knights-Errants of Leyawiin’s own Knights of the White Stallion order. While I was sure Magoza would jump at the chance I didn’t quite know how I felt about it. 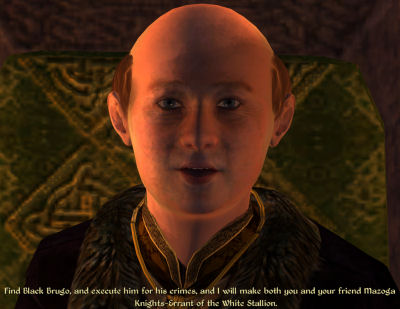 “Gee, thanks. Must be an exclusive club.”

The Count had a seemingly simple request for us – to eliminate a dangerous Orc outlaw called Black Brugo. Magoza knew of Brugo, and knew that he made daily visits to one of his gang’s hideout in some relatively close ruins north of the city. Magoza, was of course, overjoyed with the idea of being an official knight. I decided that I could use the reputation boost for future work and since there were so few strings attached there were few foreseeable downsides. There was also the bonus of getting free room and board at the order’s lodge on the Green Road north of Leyawiin which could definitely be useful in future travels. Off I went with Magoza once again. 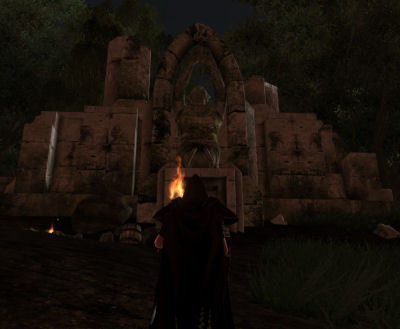 We hiked to the old Ayleid ruins where Brugo’s gang, The Black Bows Bandits, held up. At first the camp appeared to be deserted. As Magoza and I crept through the drizzle along the soft, rain-soaked ground we kept a close watch for possible sentries. We made it all the way to the steps leading down into the subterranean levels of the ruin before the first arrow caught my shoulder. Magoza dashed for cover as I rolled to my right and instinctively blasted a fireball towards the roof of the structure. Although I didn’t hit the guard my spell did reveal the silhouette of the bandit in question, drawing his bow for another shot. 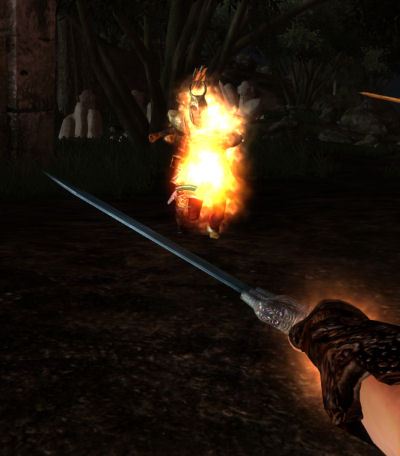 “This never gets old.”

I gained my feet and rushed for cover as a barrage of arrows landed all around me. Once I had the safety of some fallen stonework in front of me I was able to better see my target and put the archer on the defensive with multiple fireball hits. Soon the bandit withdrew from his position and I turned to see several more figures rushing my position. Whether they were already patrolling the camp or had been roused by the noise of the skirmish underway, they wasted no time joining the fray. I drew my sword and Magoza dashed from her cover to join me. 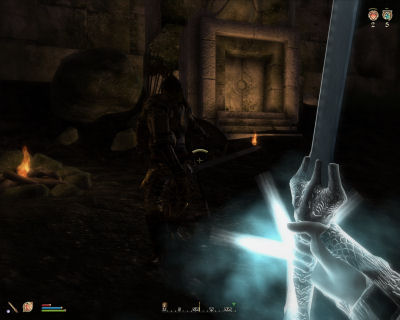 “Brugo and I square off.”

It instantly became clear that these new additions were none other than Black Brugo and his personal entourage. While Magoza was able to distract one of the bandits, tangling him up in an intense sword fight, the others concentrated on me. Blocking their hits with my shield and choosing my own attacks very carefully soon I was able to cut down all but Brugo himself. While Black Brugo was a fierce warrior I found that my swordsmanship was on another level above his and as Magoza finished her opponent and rushed to my aid he dropped to his knees and slumped over, defeated.

After looting the bodies and securing the area around the ruins, Magoza suggested that we finish what we had started by entering and clearing out the bandit camp lower in the ruins. Given that we had already slain the gang’s toughest members I figured I had nothing to lose and unknown treasures to gain, and agreed. 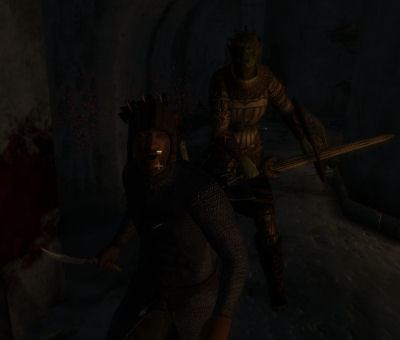 The accessible parts of the ruins were well lit and relatively clean – obviously still used. As we crept through the hallways we heard little activity. Finally we reached a large room teaming with life – several bandits gathered, chatting, eating, relaxing, cleaning their weapons, etc. while I watched from the darkened corridor. When I turned to signal Magoza she was already running full speed passed me, sword above her head, into the room. I drew my sword and stepped into the room after her. While the ensuing melee was large and chaotic, few of the bandits proved any challenge for the two of us and soon we stood with a pile of bodies at our feet. Perhaps if we were in a larger space where they could have made use of their infamous archery skills they would have fared better. We looted the bodies and continued to search the ruins, though found nothing more of interest save for the gang’s bank box which the two of us split evenly. 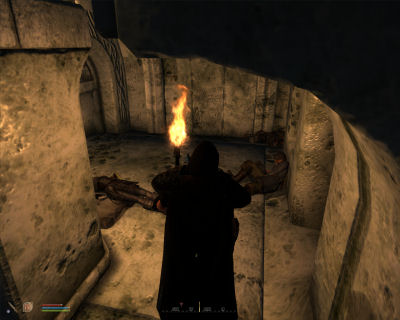 When we reported back to the Count he was quite pleased. He, very informally, dubbed both of us Knight-Errants and presented us each a shield bearing the crest of Leyawiin and keys to the order’s lodge. He also said as Knights of the White Stallion he would award us generous bounties for proof that we had killed more members of the troublesome Black Bow Bandits. Magoza immediately set herself to the task, while I retreated to the peace of my inn room for one last, hopefully quiet, night in the city before finally heading north.