After selling off a few of the odds and ends I had gathered during my recent adventures I packed up the rest of my belongings and set off for the long hike up north, from Leyawiin to Bravil. The path between the two cities, known as the Green Road, was well traveled and much less dangerous than the one I took to get to Leyawiin originally, and the walk was relatively uneventful as far as I recall. Bravil was a city that I had conducted a fair amount of business in since my liberation months ago and its muddy, run down streets were somewhat comforting to see again. I didn’t think there would be much in the way of adventuring to be had in and around Bravil but poking around had become so routine by now it would require very little effort. I started with the city guard. 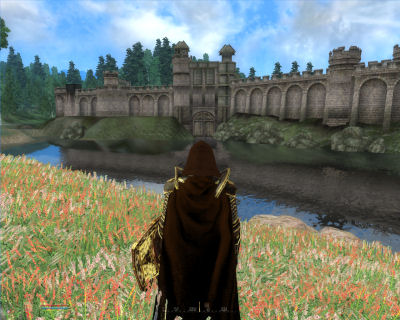 “Scenic, not so beautiful Bravil.”

One particular guardsman I was casually chatting with mentioned a local superstition, only one that he claimed had been verified as true by practically everyone who travels around the city at night, including most of the guard. The claim was that the ghost of a what appeared to be a sailor would appear on an island in Niben Bay nightly and walk the shore before finally gazing out onto the water for quite some time. So regularly does this spirit appear in fact that some of the guard joked about telling the time by its appearance. The apparition seemed harmless so the locals who were familiar with it simply chose to ignore it. They called it “The Forlorn Watchman”. I must admit that while at first this seemed like a pretty uninteresting story I had learned over those past weeks of steady, purposeful adventuring that almost anything abnormal one sees or hears of usually leads to something bigger when checked into and I was betting that there was more to this situation than a wandering spirit. I decided to investigate myself. 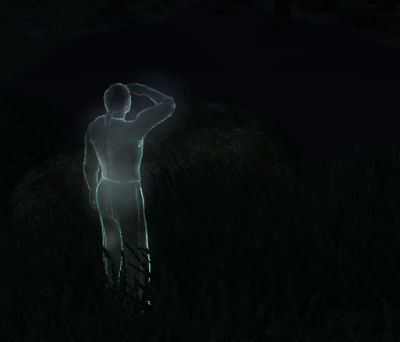 “No, ghosts don’t have a lot of interesting hobbies.”

Following the advice of several different citizens I made my way to Bawnwatch Camp to wait for the spirit to appear. As predicted, the ghost appeared right on time and began its lonely trek across the shore. As it was staring longingly out into the bay I made my move and approached it, sword drawn. The spirit slowly turned to face me and began to speak. It identified itself as spirit of Grantham Blakely and stated, rather cryptically, that he was stuck in the mouth of the panther and needed someone to help release him. The spirit gave little else in the way of details before vanishing. Later that night after walking back to the city I spoke to the innkeeper and the patrons of Silverhome on the Water about what the ghost had told me. A couple of them were quite familiar with the Mouth of the Panther, telling me that it wasn’t quite as cryptic as it sounded, and was actually the nickname the inlet of the Panther River off of the bay, so called because of the jagged rocks that line it. 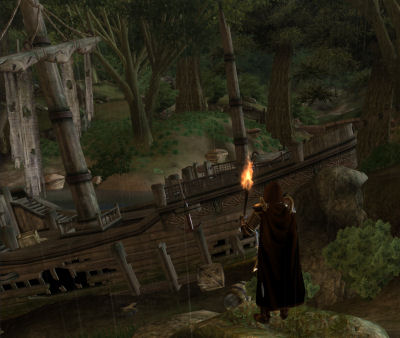 “What do we have here then…”

The next day was rainy and dreary which made the long trip across the bay even more unpleasant. On the way I imagined what scenario might have brought Grantham to his end but when I reached the Mouth of the Panther it became clear as I almost immediately spotted the damaged carcass of a small ship smashed up against the shore. I poked around the outside of the vessel to learn that it was called the Emma May. It was very heavily damaged and I could only easily make my way below deck by crawling into a giant hole that had been ripped below the waterline. As I crept through the soggy, smashed remnants of the vessel I was suddenly ambushed by several spirits. I struggled against them and eventually defeated them, but they struck with a vicious, desperate hatred which took me by surprise. I thought it odd that I was attacked in such a way until I stumbled upon one of the ship’s log books. The last entry in the book detailed a mutiny aboard the vessel against the captain and his lone supporter, one Grantham Blakely. It appears that Grantham was tied up in the bottom of the ship. It also detailed how the remaining crew sailed the ship into an inlet to escape a storm. The log ended abruptly after that. 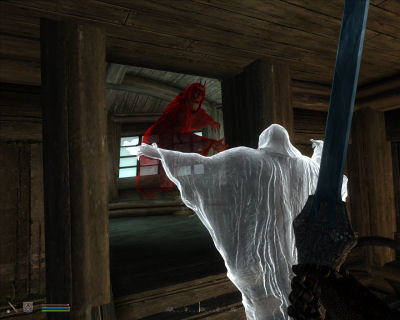 As I ventured further into the bowels of the ship I fought off more and more of these malevolent spirits until I finally reached what I had guessed to be the long decayed body of Blakely, secured to a pillar. As I unshackled his remains the spirit of the Forlorn Watchman appeared to me and thanked me for releasing him. Before disappearing once more he motioned to a small pile of cargo and miscellaneous debris in the hold. I sifted through this junk eventually discovering a small scroll that contained some sort of treasure map. 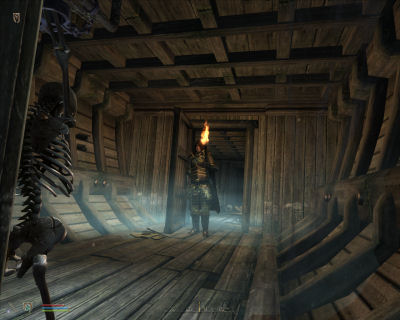 I left the ship wreck, thankful to return to the light of day, as obscured by clouds as it might have been, and attempted to decipher the map. It appeared to lead up the Panther River. I carefully walked the banks of the river attempting to avoid detection until I reached the approximate location marked on the map. Already rather wet from the steady rain fall I didn’t hesitate to dive into the river to begin my search. After a great deal of toil I located an old wooden chest wedged soundly between two rocks. Once I was able to free the chest and bring it to the surface I was delighted to find that it contained a generous amount of gold and jewels as well as some other artifacts. I don’t know if this was Blakely’s personal stash, or if it perhaps belonged to the captain or one of the mutinous crew members, but in any case it was a just reward for my short adventure and a welcome start to my quest for work in Bravil.