Normally when I post my impressions of a game I do it at least a couple of times throughout the time that I’m playing it but for some reason, possibly because I was plodding through it at such a slow pace, I never even mentioned that I’d even been playing Assassin’s Creed 2 (Xbox 360) on here. Well, I have been, and I FINALLY fucking beat it! I got 1000/1000 achievements and, more or less, “one hundred percented” the game too, just a I did with its predecessor. The verdict? I loved it. 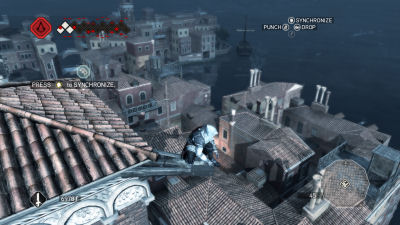 “The entire city is yours… to murder.”

Foremost on my mind as I started playing the game, other than how nice their engine is holding up, was that despite the differences between it and the first Assassin’s Creed, they were still very, very similar. I was a little surprised at just how similar they were since so many reviewers and the like said that even if you disliked Assassin’s Creed you should give Assassin’s Creed 2 a shot – I can only agree with this opinion to a point. Let me go into some details before I break this conclusion of mine down though.

First, and this is a big one for players who hated the first game, free running/parkour, despite minor improvements, is almost identical to what we had in the first game, which, in my mind is sublimely smooth most of the time. Like in the first game, however, you can occasional hit moments where your character will seemingly inexplicably (I say seemingly because it is probably my own fault most of the time) jump the wrong direction, grab the wrong thing, or otherwise not behave how you expect him to. This can really break up this otherwise enjoyable part of the game and kill the immersion a bit – one minute you’re a badass assassin effortlessly bounding the rooftops in search of your next mark, and the next instead of gracefully running across a line tied between buildings, you just decide to hop off the side and plummet 75 feet to your death. Wow. This felt the most silly the couple of times it happened when doing “leaps of faith” and instead of jumping cleanly into a bale of hay I instead dove head first for the cobblestone road below. Well, so much for faith… 😉 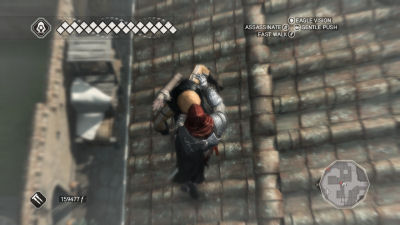 “I’ve slaughtered so many of these poor roof top guards that I actually kind of feel sorry for them now.”

One thing definitely worth mentioning relating to the free running, given that it is such a big part of the game, is that it is used in more creative ways this time around. As you progress in the environments you run into structures that require more creative climbing. This is expanded on much, much more in the various “Assassin Tombs” and “Templar Lairs” in the game which transform your character’s city traversing parkour into a Prince of Persia series like puzzle/platforming experience. Most of the time, except for when you run into some of the above mentioned rough points, this works quite well and is a great change of pace for the series, even if it did make me use my brain a bit more than I was expecting to going into this game.

AC2’s combat system feels like a good analogy for the whole game, really. It is almost exactly the same as the first game’s, only with some subtle improvements and the addition of some new options at the player’s disposal. A lot of the time these improvements and additions don’t feel truly needed but they at least succeed in giving players a tiny bit more choice and variety and apparently a lot of people needed those things. As someone who liked the first game already, more is usually better, and they didn’t overdo it or otherwise ruin a good thing here. It does indeed feel like improvement and refinement. 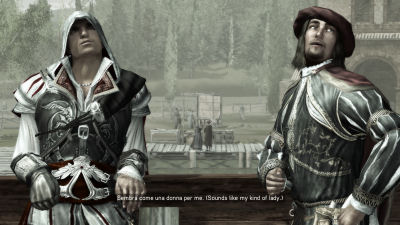 “Who is my friend? Oh, it’s only Leonardo FUCKING Da Vinci!” 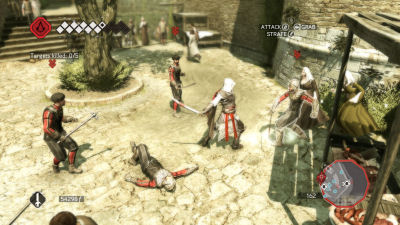 “Alright men, gather ’round him and watch as he kills us all one by one!”

I could ramble on a lot more about the game and in a lot more detail but I’ll cut myself off. Back to the conclusion I referred to before. Like I said, I loved it, but I also loved the first one despite its flaws. Still, it is hard for me to recommend Assassin’s Creed 2 to someone who absolutely hated the first Assassin’s Creed – again, it is largely the same game with some improvements, some needed more than others, and a new setting with all kinds of awesome Italian accents. If you were simply turned off by minor issues in the first game then certainly check it out, otherwise you might as well wait until we see what Assassin’s Creed 3 brings to the table. Of course by then it is possible that you won’t have ANY FUCKING CLUE what is going on in this batshit crazy conspiracy story. 😉

I have no idea what Assassin’s Creed 3 will be. It could literally take place anywhere, at any time, and they could change the gameplay in any number of ways. So far I like where they’re headed though. I’m a little puzzled (and maybe put off) by the announcement of Assassin’s Creed Brotherhood but I can’t imagine not playing it at this point unless it just gets awful reviews. I would like to request that if they keep adding in requirements to complete things in stealthy means they add some more traditional stealth mechanics to our assassin’s repertoire of abilities though.

One more note: I played the game with the 2 “additional” DLC chapters intact and feel like I would have definitely missed not having them there, at least story wise, so I’d recommend picking them up if you care about that sort of thing and/or consider yourself a fan of the series. They were a tiny bit buggy, with sound dropping out on me a few different times during cut scenes, which I had heard others mention as well. Still, worth it.

As usual with Xbox 360 games I stole all of my screenshots from other people. It was really hard to find decent, non-PR released bullshots for this game. Most, if not all of these are from the PC version.