I just wrapped up a few weeks somewhat obsessed with the Steam Early Access darling open world survival game Rust. Honestly, it was a surprise that it would even run on my relatively old gaming PC but some of my old gaming buddies were playing it together and invited me to jump in and, after hearing all kinds of hilarious stories about it on various podcasts and forums and whatnot, I couldn’t resist. Unfortunately I was plagued by a bug that caused me to frequently, randomly disconnect and my group seemed to have horrible luck with encountering cheaters and abusive admins on servers, and the few servers we did well on wiped or went away after we got established. Bummer!

There’s a lot I could say about Rust. It’s a fun game, particularly with a group of friends, and I expect it or similar games to make a lot of noise in online gaming in the future. The concept is definitely solid. Rust itself, however, still feels like it needs a lot of refinement in the design before it’s truly a compelling long term experience. After playing for just a few weeks cracks began to show and it became a lot less fun. The game is only in early alpha for now though so hopefully Garry and company will have something truly special on their hands by the time the game is officially completed. Personally, I’m sure I’ll be back (hopefully with friends) after a bit of a hiatus for them to expand upon the game a little.

The real magic of Rust is all of the hilarious systemic, emergent experiences and the stories that result from them. This sort of “put a bunch of people together and see what happens” gameplay is what made sandbox MMORPGs such as Eve Online or, way before that, Ultima Online so compelling for many of us. At its core it seems like that’s all Rust really is: one big, silly social experiment. Its crafting isn’t that deep and “surviving” without other players in the world to kick over your sandcastle, as it were, is a cinch. Luckily there are no shortage of assholes in Rust who will delight to ruin your day and if you ever do run out that mantle is easy enough for you to take up yourself.

I first started out on a “PVE” (player versus environment, as opposed to “PVP” or player versus player) server where I’d hopefully be somewhat free to learn the ropes of the game before having to deal with having my progress constantly impeded by other humans and, I have to say, it was going well. I had finally located a steady supply of enough resources that I could build just about anything without too much trouble. Being fascinated by all of the oddly shaped, tall rocks that dotted the landscape I built a huge tower next to one that particularly stood out on its own in a valley with a lot of easy to reach resource spawns. I purposely left the top and some of the sides of the stairway open so that I could climb out onto the surrounding rocks and run around like an idiot. I’m not that naive though, as I was at least smart enough to further compartmentalize all of the rooms that actually contained valuables though you couldn’t necessarily tell that from the outside.

One day I logged in, did a little hunting near a local zombie spawn, and returned home only to find a couple of gentlemen in full Kevlar armor (the best armor in the game) with assault rifles quickly and haphazardly building a stairway up onto the other side of the rock where my new tower was. “Were these guys building their own house? No, no way… they were moving too quickly and seemingly only interested in making it to that top!” I thought. “These guys are trying to raid me!” It was too obvious that they had noticed my open roof design and were planning on jumping in through the top to rob my ass blind. 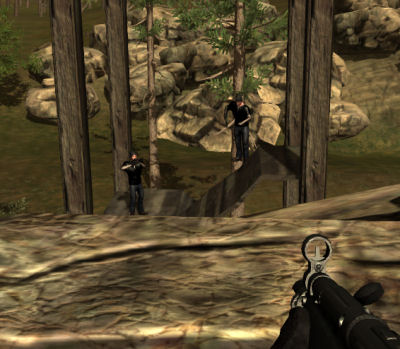 I quickly ran into my own tower and onto the top of the rock just in time to watch them finish their stairway. When one of them hopped onto the rock he fell to his death which caused the other one to bide his time while he waited on his buddy to respawn. I used this time to restock and watch for them. Eventually the lone survivor spotted me. We watched each other tensely for a minute or so, guns drawn. Finally he took a shot at me. That was all of the encouragement I needed. I opened up on him with my submachine gun hitting him at least a couple of times in the hail of bullets. Humorously, my would-be uninvited house guest immediately turned around and jumped back to his stairs and disappeared from my sight. Wow, some PVE server, eh?

I quickly formulated a plan. I had the raw materials stored to hastily close up the top and sides of my tower which would make their attempts to raid me impossible, or at least in the way they had originally planned. Once I completed my modifications I left my house, circling back around to the base of their stairway to attempt to flank them. It was night by now, pitch black even, and I got there just in time to watch them both gather their gear (evidently my attacker had also fallen to his death attempting to flee me! Ha!) and return to the top of the rock. I slowly followed them. I chuckled to myself as I watched them run over to my now enclosed tower and shoot at the walls a few times in frustration. Sorry guys!

Over the next few days I identified my attackers as belonging to a small group who setup a large base just across the valley from me. Nice neighbors, eh? Once I caught them snooping around my front door, firing shots into it randomly, and decided to call them out in the global chat. Some others questioned them for possibly breaking the server’s rules but as an admin got involved I decided to let it be – I had no real investment in this server and these guys were either being fairly good sports or were totally incompetent. Either way their antics were amusing to me. Our little war of words only served to escalate the behavior however. One day I logged in to find my front door and the paths to it totally blocked off by spiked barricades. I, of course, returned the favor. The next time I logged in I found that they had built a stairway up the side of my tower, and blown a hole in it, though they never managed to get into any of my locked rooms so no real harm was done. This kind of silly passive-aggressive stuff continued before I finally abandoned the server to join my friends elsewhere. 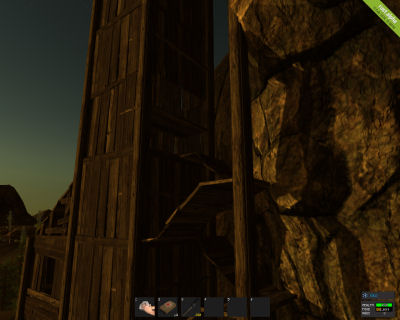 “I was sure to thank them for the additions they made to my house.”

Speaking of which, here’s a Rust-ass story for you. My group and I had established a tiny shack in the rocky southern coast and, after spending a night chasing off our neighbors and gathering resources, eventually built a small house in a nearby clearing. We were starting to get a foothold, in other words. The next day I log in to find that our server had been wiped. Damn! Since I logged in long before everyone else I decided to spend some time gathering resources and building another shack in the exact same place as our original one so that when my friends got on later they could have a leg up to continue where we left off. Right after completing my shack, before logging off, I decided to explore the neighborhood only to discover two nearby shacks with metal doors. Now, unlike houses, despite it taking a long time shacks can be completely destroyed by basic tools whether they have a metal door or not. All the metal doors did was demonstrate that the owners probably had plenty of raw materials to spare. After making damn sure the shacks were unoccupied and the owners weren’t in the area I started trying to hack them down.

After several tense minutes the first shack is destroyed and, as luck had it, there was a ton of decent starter loot inside. Lots of raw material, some blueprints, even a gun! I grabbed it all and quickly ran back to my own shack to stash it, excited about this seemingly incredible stroke of luck. As I approached my shack though, I heard footsteps. Wow, really? This was a fairly isolated area and the whole time we were here previously we never had anyone come wandering by. I waited several tense minutes with my gun drawn and eventually the steps lead away. I darted to my shack to stash my new valuables. Shew! Just then I heard footsteps approach yet again and then proximity chat kicked on. “Anyone home?!” I declined to respond. Whether he called my bluff or not, he immediately started hacking down my shack. Shit! What could I do? If I logged out or just stood here it was only a matter of minutes before he was in and all my hard work, never mind my loot, was all history. “Well, I do have this gun.” I thought. 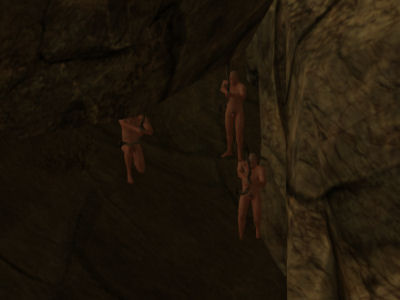 “Just like real life, leaving your home only to run into a group of naked men with bows is bad news.”

I rushed outside carefully closing the door behind me and started shooting wildly. Now, at this time I didn’t have much experience with Rust’s atypical feeling ballistics system so I ending up missing all but a couple of shots which apparently only winged him and, having just looted the gun, had no extra ammo to spare once I had shot my magazine dry. The anonymous looter on the other hand was apparently an expert hatchet man. The next thing I knew I was lying dead on the ground. I felt damn stupid having just died to a practically unarmed guy when I had some armor and a gun, but whatever. I spawned back in my shack using my sleeping bag and figured my sole remaining option was to attempt to rush him and hatchet him down like he did me. Again, no such luck. A quick hatchet duel later and I was dead again. This time, because of the way Rust’s spawning system works, I was forced to spawn in a random spot and ended up absolutely nowhere near my new home. By the time I could make it back my stuff would be gone. I simply called it a day.

After my frustration subsided I couldn’t help but laugh. Wow, truly the circle of life in Rust: I get incredibly lucky and manage to loot someone’s stuff having only been on this newly wiped server for a little while only to be ganked by a random passerby for all of my newly won loot literally only minutes later. Only in Rust!