My partner and I have been playing a few newer, console based, narrative heavy adventure-ish games lately, mostly as a way to play something semi-cooperatively as those types of games seem to work great for passing the controller and working together on choices and puzzles. I’ve mentioned playing all of The Walking Dead games on Xbox 360 and we also had a incredibly enjoyable but tragically unfinished foray into the first four Life is Strange episodes (more on that when we eventually go back to it and beat it) but for our next game I wanted to introduce her to something more puzzle focused, more like the classic adventure games I cut my teeth on. Low and behold, I remembered that I bought a copy of Double Fine’s The Cave, a game highly influenced by such adventure games, and what it lacks in narrative it makes up for by supporting simultaneous, same-screen co-operative play. Perfect! 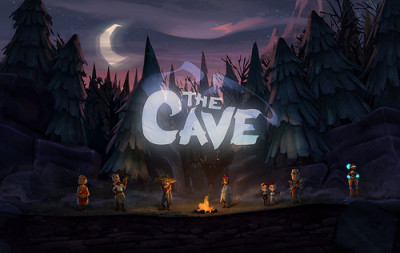 “Our cast, all complete and total bastards.”

The Cave was written and directed by Ron Gilbert, one of the legendary LucasArts designers who helped bring us the absolute adventure genre classics Maniac Mansion and The Secret of Monkey Island, along with some of their sequels. Some of that influence is immediately obvious, in fact. Right off the bat you’re presented with a sarcastic narrator, a creepy, cartoony world, and asked to pick 3 characters that you can switch between to take on your adventure. There’s also a wacky, if not somewhat macabre sense of humor throughout (mostly from aforementioned hilarious narrator) which definitely feels like a throwback to the days of “talkie” LucasArts and Sierra games. Something I miss, frankly.

The game itself is a side scrolling puzzle platformer, but the big twist is that its puzzles aren’t based on platforming or physics so much, as old school, often baffling, location and object based adventure game puzzle design, in what, to me, is in an interesting and fairly unique way. Sure, there have been plenty of platformers that threw a few similar puzzles in here and there, but I can’t think of any as utterly focused on this style of puzzle solving as The Cave is. It’s almost a new genre. One of the ways it adapts to the more action orientated control scheme of a platformer is by utterly stripping the inventory system down to its bare essentials – you can only ever hold a single item at a time, and the puzzles are cleverly designed so that, despite how it may seem at times, you never need more than that to solve a puzzle. 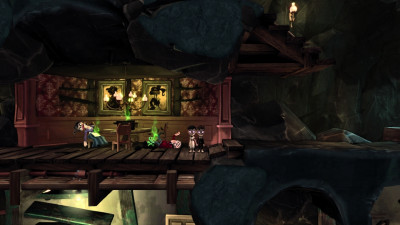 Each character also brings with it its own unique gameplay sections which are the best and most challenging in the game. They also each get their own backstories explaining how they wound up in The Cave. Ultimately it turns out that each of the seemingly harmless adventurers has a dark side, and while The Cave rewards them with the selfish ends they seek, it also hilariously rubs their face in the repercussions of their terrible behavior. This game has some seriously funny moments, definitely one of the funniest games I’ve played in a while. 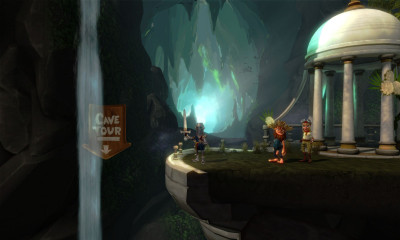 “The Knight has what he came for…”

The Cave isn’t perfect, but it’s probably closer than most of Double Fine’s other efforts recently. Other than being a little loose controlling and having some (pedigree appropriately) insane puzzles here and there, the biggest issues in my mind are the areas that repeat no matter which characters you’re playing, which can be a bit of a chore to re-play over and over again, and the fact that having to choose from a pool of 7 characters means you have to play through the game a third time, re-playing two of the stories you’ve already completed, to truly complete the game. Ultimately these are minor quibbles though, I admit. 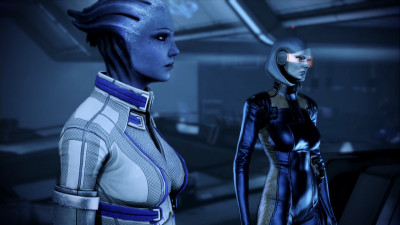 I also had the pleasure of watching my girlfriend play through the entirety of the Mass Effect series. Sure, I took the controller here and there, but for the most part I just watched. Yes, all three games. Damn. It was a cool experience though, both reminding me of how much I enjoyed the first Mass Effect along with finally exposing me to Mass Effect 2 and Mass Effect 3. I admit I started to check out a little bit with ME3, both in part to how surprisingly long it was, and because I definitely want to go back and ME2 and ME3 myself one of these days. 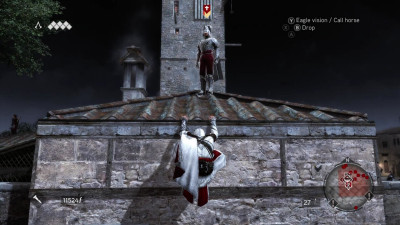 “Like most people who Ezio meets, this Borgia guard is about to die in a brutal fashion.”

Finally, wanting something a little different to sink my own teeth into, I dug Assassin’s Creed: Brotherhood out of my backlog and completed it and its DLC. I loved the first couple of games and, as noted here, was pretty skeptical about them turning Assassin’s Creed 2 into a trilogy. I’m happy to report that I definitely really enjoyed the second piece of that trilogy, Brotherhood. Of course, I did take a comically long 6 year break between playing AC2 and AC: Brotherhood, but I digress, I enjoyed it immensely and I’m looking forward to playing Revelations sooner or later.

What did I think? 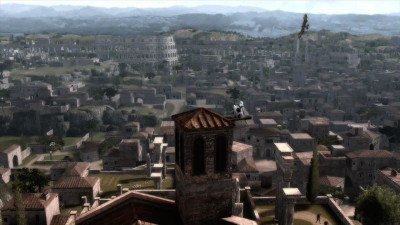 “Seriously though, Rome is pretty amazing…”

Let me try to keep this short and sweet: Ezio is still a badass, the world building is still amazing, and renaissance era Rome is great, the occasional times when the free running glitches out and you drop when you didn’t mean to, or jump off the wrong direction, are still a major buzzkill, and it seems like the more items and options they keep adding to this game the more opportunity there is for these types of glitches to pop up, the Facebook game-like follower missions are fairly pointless, but on the flipside being able to call in followers to take out targets is pretty awesome, I was disappointed that several of the 100% synchronization requirements were fairly difficult, though I enjoyed trying to 100% as many of them as I reasonably could pull off as a bit of an extra challenge, Leonardo’s war machines were some wacky fun, I liked that the game was confined to a single, massive city, but I wasn’t a fan of the fact that they still felt the need to block off certain sections of the map until later chapters, and while the story was fine, it wasn’t quite as enjoyable as AC2’s, I still loved to hate Cesare Borgia though, and finally the Desmond stuff was almost totally incidental beyond the cryptic ending.

I think that about does it. I liked it a lot, over all, and I’m itching to play another one, especially to revisit Altair’s story in Revelations. If only there weren’t, by now, another 6 full, long, potentially extremely repetitive Assassin’s Creed games out. What the fuck?!

Sorry! As usual my Xbox 360 screenshots were actually pilfered from caves across renaissance Italy rather than my own console.