I pre-ordered XCOM: Enemy Unknown for PC back in 2012, anticipating the ever-loving fuck out of it after not having a turned based tactics game come close to the experience I had with the original X-COM back in the 90s, and here I am, finally playing the goddamn thing just after the release of its expansion pack over a year later… and I’m playing the Xbox 360 version to add insult to injury. I’m goddamn despicable.

The decision to go with the console release of XCOM: Enemy Within came about because I had never purchased the game on console and had heard repeatedly from various sources that playing with the controller was fine. Not only fine, but a lot of people preferred it to keyboard and mouse. Yes, even PC gamers. At first I found this unfathomable but I eventually accepted that it might just be true. This is 2014 after all. When Enemy Within was announced I figured it was my opportunity to pick up the complete “commander edition” version of the game in one package and play from the luxurious comfort of my couch. My only disappoint with this decision is that now I’m sure I’ll play through this game several more times in the future and when I do it’ll be on PC, so I’ll need to pick up another copy of the Enemy Within expansion pack regardless. Ah well. 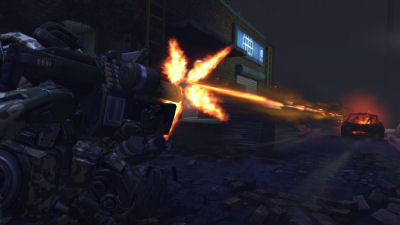 So yeah, I’m not going to go into why I loved the original XCOM: UFO Defense because I plan on putting together a retro review of it sometime in the next 20 years. Let’s just say that several aspects of the game struck me as more or less perfect and I wanted another experience that recaptured its glory. I watched all of the discussion regarding the various spiritual successors but always passed, played some other games inspired by its mechanics (such as Silent Storm, another game I need to revisit and review) but never got too far into any of them, and when I heard about XCOM finally picking up a biggish budget sequel I was thrilled. Finally, when the Firaxis game was announced and the first details were released I was quite hopeful that they’d finally put together a worthy sequel.

XCOM: Enemy Unknown isn’t really a sequel or a spiritual successor, but a full on, faithful re-imagining of the original game, updated with modern mechanics and presentation. While that sounds like a description for any update of an old game, it’s really quite literal with XCOM. It’s like they made a check list of everything that made X-COM “X-COM” and put it into this new version, only changing and (usually somewhat modernizing) the systems underneath to make the still very customizable, and still very brutal game more accessible in today’s market. To put it another way, it is almost as if the 2012 development team took the original design documents and concept art and made a new game without much knowledge of the previous one. Sure, a lot of the little details about how the mechanics work and whatnot are all quite different but on the surface it’s the same damn game. At the risk of losing some friends here, I’d even dare say that this new imagining of XCOM might even be better than the original in many aspects. It’s just that goddamn good! Awesome, dynamic squad based tactics, persistence through leveling soldiers, strategy via managing the XCOM program and researching technology trees on the geoscape. It’s all here! 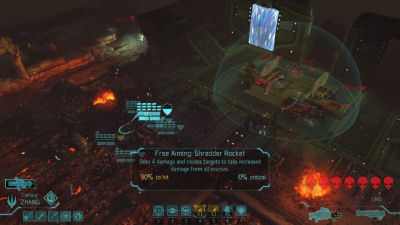 “Despite what the suits back at base say, sometimes you just HAVE to use high explosives.”

I played through the entire long campaign with the worthy additions of Enemy Within and the other DLC, and despite only playing on normal difficulty I still found the game to be challenging at times and damn rewarding to boot. I tried to avoid “save scumming” but there were a few times where I reloaded to avoid losing senior soldiers… oh, and I abused the hell out of it to beat that damn whale mission. The Xbox 360 build had a couple of hard locks and other odd bugs but nothing to truly ruin the overall experience. I could go on and on about this game, and if I had written about it while playing I probably would have, but for now that is all I want to gush over it about. Perhaps more the next time I decide to play through?

To cross another one off of my pile of shame, I finally played through the first of Telltale’s The Walking Dead seasons. Being both a fan of the show and of adventure games in general, I’ve been wanting to play this game since I first heard about it and since then I’ve only heard more and more good things. Are they true? Yes, mostly… 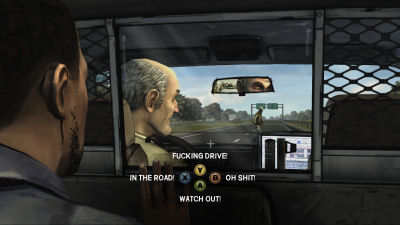 “I wanted to post an example of TWD’s excellent, well written dialog system. So, yeah…”

The Walking Dead is a classic adventure game in most respects. Sure, the UI is stripped down and most of the puzzles probably barely qualify as being such in the traditional sense, but at its core it still plays unmistakably like the graphical adventure games of old. While there is still a lot of environmental exploration and “pixel hunting” for items, the items mostly serve to move conversations forward and add the occasional context sensitive action – there’s no tedious inventory management and item combination voodoo to deal with at all. The core of the gameplay instead focuses around the conversation choices you make and how those choices affect your story – who is in your group and how they feel about you, which in the end largely comes down to differences in dialog. That sounds a little simple but it works surprisingly well and while the ultimate outcome is more or less the same, your choices at least feel like they carry some real weight.

Not everything works well though. The action sequences are pretty much all god awful. I was almost shocked to even see them here at all – people have been complaining about crappy action and arcade sequences in adventure games since the 1980s. While there’s some variety there, mostly my problem with them has to do with my second complaint: the engine is pretty bad. There’s all kinds of issues: long loads, flickering, clipping, and general bugginess. It just generally feels clunky. This only really started to affect my enjoyment of the game when it came to those action sequences, especially when they resulted in a sudden death or fail condition. That leads directly to the final point, one I really wasn’t expecting, but instant deaths/fails galore! Really? I’ll fully admit that I’m a Sierra apologist but I thought the dudes at Telltale were big LucasArts fans. I figured they would detest this kind of thing. Ah well, at least they’re generous enough to automatically restart the gameplay right at whatever sequence killed you. 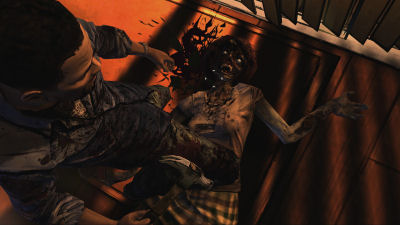 Anyway, back to the good. The hand drawn, graphic novel inspired art style is good (sometimes even strikingly beautiful) even if the engine and some of the animation lets it down a bit. The voice acting is mostly fucking brilliant, with the main cast being among the best I’ve heard in a game. Telltale absolutely nailed the desolation, the desperation, and the overall feel of The Walking Dead setting too. Finally, the writing is great. I quickly found myself caring about the characters and, probably more telling, when I think back on my jaunt through zombie infested Georgia, I remember it more like I had read a novel or watched a good movie than I had played through it in a game. The more I ponder it, I’d have to chalk it up to a tricky combination of the basic setting and plot, the character development, and the agency the player is given behind how the story appears to unfold. It’s not just an infatuation with the excellent Lee and Clementine either, even the tiny stories from the 400 Days episode made an impact.

If you’re a fan of the Walking Dead show and/or comics and don’t completely detest graphical adventure games, please do yourself a favor and put this on your wishlist if you haven’t already played it. It’s brilliant. I played through the aforementioned “400 Days” extra episode and can’t wait to play through Season 2 when it is finished being deployed later this year.

Screenshots are PC not Xbox 360, as I swiped from the Steam Community. Thanks, glorious PC gaming master race!