I’ve been following America’s Army 3 pretty religiously. Indeed, I’ve already made one blog post about it over here. At this week’s GDC we’ve been getting plenty of new details about game though. 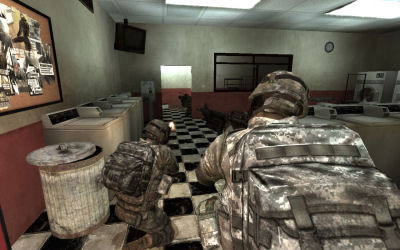 “Yes kids, using lean looks as stupid as it feels.”

Here’s some of the new, interesting stuff I’ve learned:

I cannot wait for this. I’d been working on and more or less finished a new website for my clan (but it won’t go in until the clan officially goes live again) and counting the days until this is released. All of these new tidbits have me salivating.

In all likelihood this first release will have more than a few rough spots – it took the original version of AA quite a while to end up as solid as it is these days. I can only hope they’ve learned from the past. In any case thanks probably mostly to our tax dollars AA’s developers put even the best traditional FPS developer’s post release support to shame with patches and new content so things will improve over time providing the government doesn’t kill the program.