With my various bags now bulging with loot I decide to head back to the city to lighten my load a bit. I figure that it might be best to head for the bustling Market District of the Imperial City to barter my wares – more shops, more money, and less of a chance of anyone raising an eyebrow about the origin of any of my goods. I head to a seedy little tavern in Skingrad to drink an ale and plot my course. With my tattered road map rolled across the bar I plan out a path that will take me through some more territory I’ve yet to explore before eventually reaching the capital.

As I had hoped my journey takes me through many relaxing scenes dotted with the occasional desolate ruin. Beautiful fields of tall, blowing grass and wild flowers, herbs and other valuable spell reagents abound, and not even as much bother by the usual variety of wild predators that I seem to always be finding myself having to fight off. A peaceful day so far. 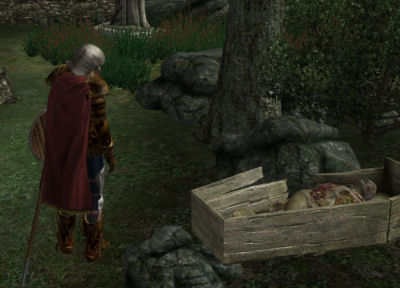 Eventually I come across a small but well stocked bandit camp nestled in the hills and decide to go on the offensive. I drop some of my bags by a boulder and creep stealthily into their camp, killing them one by one as quietly as possible, looting as I go. Don’t get me wrong, these bandits would have attacked me if they had spotted me first and I would have ended up fighting them regardless but my attitude towards killing has definitely changed since the day I left my cell. My blade just feels right in my hand and I’m starting to forget that I ever went a moment without feeling the tickling warmth of a flame spell dancing in my palm. 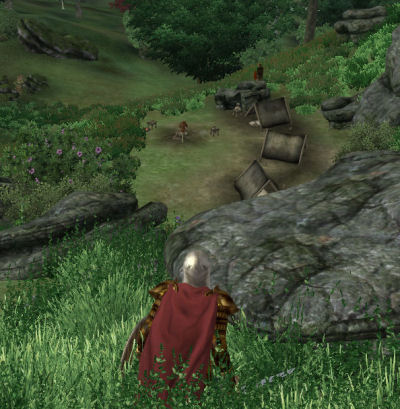 As I travel further I eventually encounter a small compound nestled in a valley in what seems like a very isolated location deep in the forest south of the Imperial City. It includes a large, perhaps once fairly nice house and a small but well constructed chapel. This place, whatever it once was, has evidently gone unused for many years as the buildings are strewn with debris and the dust in the air is almost chokingly thick when stirred. This does seem like it might be a nice place to clean up and call home though. Actually, I really could use a base of operations. Somewhere to stash all of the belongings that I have been lugging around this entire time. I don’t know how comfortable I am attempting to lay claim to this place though. 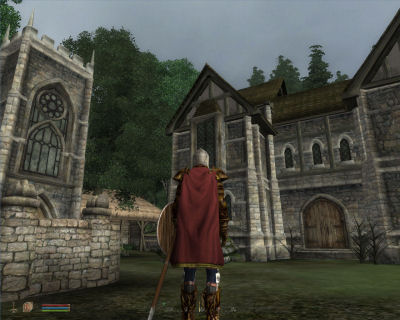 “What kind of freaks live here? It reminds me of my old boarding school.”

I eventually journey north and find The Gold Road that runs between Skingrad and the capital. As night falls I find myself increasingly stalked by the threatening sounds of cracking twigs and other signs of movement just off of the sides of the road. My attempts to inconspicuously observe the source of these noises takes more and more of my time until I’m watching the tree line practically the entire time. That’s when I spot it – a large troll attempting to shadow me. I waste no time and blast it with a shot of flame before drawing my sword and shield and dashing towards the beast. After a quick battle I’ve bested him. Feeling pretty good about myself I continue down the road.

Suddenly, as a traveler that I had passed heading the opposite directly down the road slips out of view I find myself in the midst of an ambush. Another troll and, of all things, another gargoyle! I concentrate on the troll and quickly dispatch it but the gargoyle is relentless in its attacks and my attempts to dodge them begins to fail with increasing frequency. The traveler I had passed, perhaps hearing the commotion, runs to aid me, and another coming down the road towards us draws his blade and joins the fray. I summon a scamp minion and charge towards it. 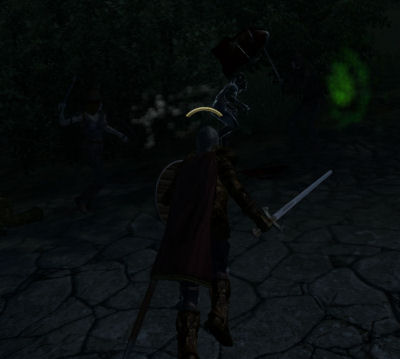 “Everyone in this picture died at least once. It’s official, I hate gargoyles.”

The gargoyle is far too powerful. It quickly slays both of the travelers who attempted to aid me and has me on the run. Luckily I’m greeted by an imperial guardsman on patrol. With his assistance I’m finally able to whittle the creature down and dispatch it.

This was truly an epic fight. Not only did the Gargoyle kill both travelers and my scamp (multiple times) but as I ran up the road hoping to bump into a guard I was attacked by a spriggan and its bear minion as well. The guard actually took quite a while to dispatch the gargoyle. Wow… and on a major road too!

I finally reach the city and purchase a room for the night. The next morning I head into the busy streets of the Market District and peddle my wares to a variety of shopkeepers. By the time I’m done I’ve amassed several thousand gold. While I’m far from wealthy I’m certainly no longer in need of scraping together the meager profits from hunting mud crabs. In fact, with my gold pouch in hand I head over to the Office of Imperial Commerce where I hear they have a few vacant city houses for sale. After some careful consideration I decide to purchase a small house on the outskirts of the Waterfront District. 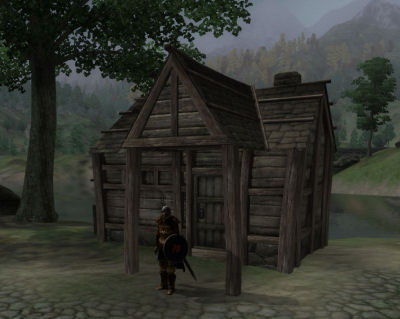 The neighborhood, while fairly rundown and low class for a part of the Imperial City, has its charms. For one, a great view of the lake. One could also swim the short distance across said lake to quickly reach the area south of the city. A admit the house itself has few amenities but I prefer the idea of owning my own place to that of crashing someone else’s house, seemingly deserted or not. The shack affords me a regular place to sleep while I’m in the area and, more importantly, a place to store my loot. I have plenty of loot as well, as I’ve yet to decide what to do with the majority of the magical items I’ve found throughout my travels so far. While many of these items are potentially worth quite a bit on the market they may be more valuable for me to keep around in the long run. With such an expensive collection locked away in my meager shack I make it a priority to spend several days repairing and securing my new house. 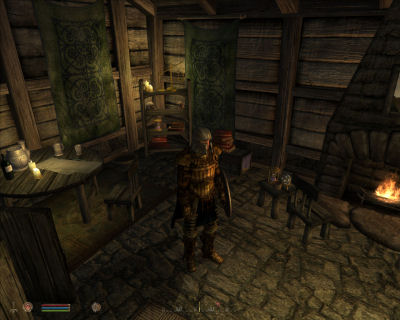 “My house is entirely full of other people’s stuff. Rent-A-Center eat your heart out!”

Soon enough it is time to head back out onto the road. I journey south down to the quiet port city of Bravil. At least I thought Bravil was quiet – as I near the front gate I arrive on the scene of a massive fight between an unusually large gang of bandits and some traveling adventurers. I’m quick to join in but not quick enough to save the adventurers, unfortunately.

I theorize that this unusually large random battle was made up of a chance combination of 2 or 3 separate groups of bandits and 2 or 3 traveler NPCs. 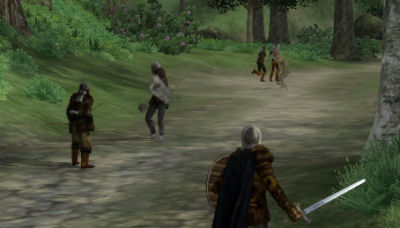 “Have at thee, foul practitioners of banditry!”

I head into the city, visit a couple of shops, swing by the Great Chapel, and just generally take in the sights. While walking the streets I bump into a Breton scribe who, recognizing my garb to be that of an adventurer, offers me a job. He claims that he’s a budding cartographer and needs someone to scout out the locations of all of the ruins, caves, shrines, and other interesting landmarks around Cyrodiil. He offers me a flat fee per location of note discovered.

While the Breton’s fee isn’t remarkable it is steady work and I’m hoping that the long, hopefully interesting trip will present me with many opportunities to improve my skills and perhaps regain some of my memories. A trip of self discovery, perhaps? He offers me writing utensils and parchment which I place along with those that I already use for my own personal maps and, of course, this journal. I purchase a horse from Bay Roan Stables and, as quickly as I arrived, leave Bravil to begin my journey. 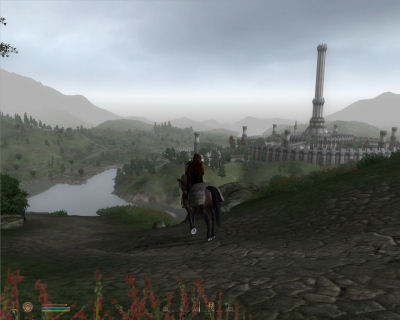 “Where I keep my stuff.”

As I head north I take one, long last look at the White Gold Tower of the Imperial City and reflect upon the last wishes of the Emperor. I will embark upon his quest soon enough but first I must complete my own tasks in order to prepare for the possible consequences of facing his Blades. I briefly wonder what kind of debates and discussions are taking place in the great halls of Cyrodiil regarding the future of the throne. I wonder if Baurus, the only surviving Emperor’s Guard, reported what I had told him the emperor said about his heir. Did the powers of the empire wait impatiently for my arrival – did they even know of my existence?

Obvious to most Oblivion players but this cartographer’s quest doesn’t actually exist. I just made it up. Why? Just felt like it.