Loaded up with my various bags, pouches, and satchels I was ready to once again hit the road. This time I’d be making the long southward trek from county Cheydinhal to the city of Leyawiin.

My first order of business was to purchase a horse to aid me in the journey however the only stable located in Cheydinhal was Black Watersides Stables which specialized in an extremely expensive breed of horse. A breed of horse I’d like to have, no doubt, but one that I couldn’t justify the expense of for this trip especially considering the potential for danger along the way. 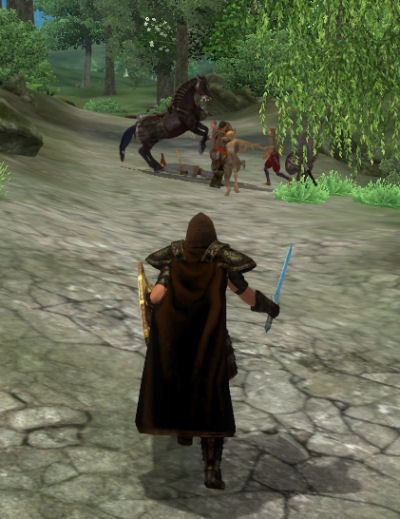 That thought had barely escaped my brain when, as I headed onto the road, I witnessed a group of bandits hassling an imperial guardsman. As the group split up, the guard chased two of them into the brush while another attempted to steal his horse. I gave the guard a nod just before we lost sight of each other and dispatched the lone brigand for him. An interesting start to my journey for sure.

For the most part the trip was uneventful. I harvested the occasional herb, passed more than a few mounted guardsmen along the roads, and generally enjoyed the relatively peaceful trek. In fact the first highwaymen I encountered were over half way there, at the Imperial Bridge – a surprising place for them to setup shop since the nearby Imperial Bridge Inn was a popular stop for imperial patrols. The bandits were relatively amateur and posed little threat. 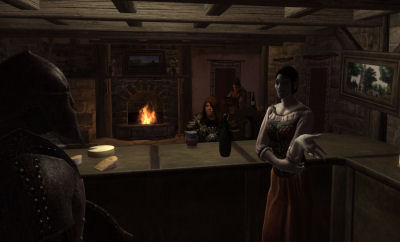 “I seem to be doing this more and more lately.”

I decided to take a slight detour over to the Imperial Bridge Inn to purchase a fresh drink. While last time I was in the area I became aware of the underground slave trade operating in the thick swamplands to the East, I didn’t expect to run into any work while at the inn.

As I was minding my own and enjoying my ale I was approached by an Altmer who claimed to have some easy work for me if I’d like to accept. The Altmer, a magic user by the name of Lithnilian, told me that while conducting some research in a nearby cave he was driven out by some of the cave’s more vicious inhabitants. Unfortunately for him he had left his research notes in his haste. The notes represented years of his research and were quite precious to him. This sounded like easy money. 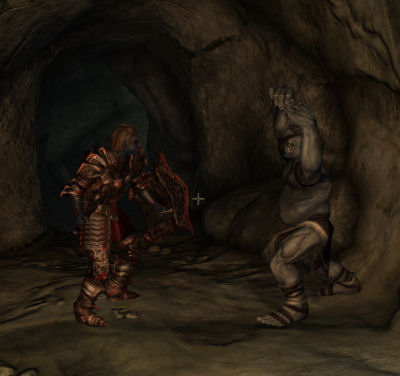 “I should start charging tickets for this sort of thing…”

As I crept into the dark natural cave known as Bramblepoint Cave to the locals I feared that Lithnilian’s description of the place was slightly understated. It was absolutely teaming with monsters. Ogres and Trolls in particular seemed to inhabit various portions of the cave system in large numbers. My curses quickly faded, however, when I learned that clearing out monsters wasn’t Lithnilian’s only neglect when exploring Bramblepoint – there was an absolute bounty of loot to be had in various chests and treasure piles!

Eventually I found the chamber in which Lithnilian had been doing his research and was able to recover his notes without too much difficulty. Another job well done. 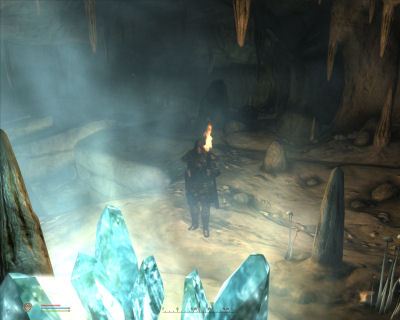 As I left the cave and ventured back south towards the inn I noticed a small abbey in the distance. Having never noticed the building before I figured I might stop in to get out of the rain for a moment and perhaps receive a blessing. While I hadn’t quite decided to turn to The Nine yet I had at least learned of their powers along my travels. As I got closer to the building I was surprised to see it vine covered and crumbling. I curiously began to push open the door to poke around when I heard some strange noises coming from inside. My own magic use had grown fairly powerful and I recognized some of the Daedric in the chants from some of my own incantations.

I quietly put down my torch and some of my extra bags, drew my sword, and kicked open the double doors. Before me was a grizzly sight: two robed men, necromancers no doubt, performing a ritual. All manner of desecrated corpses and body parts were scattered about the chapel and the altar had been… re-purposed. 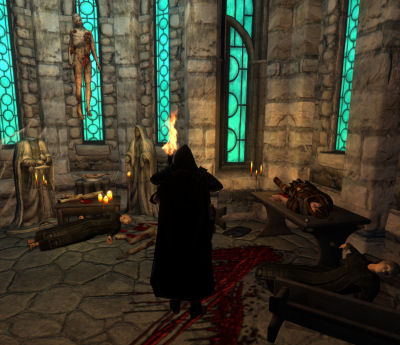 “…and I thought *I* was a good interior decorator!”

No sooner had I taken in my surroundings than the necromancers had summoned a selection of undead minions and began casting their own destructive spells against me. Luckily the necromancers and their animations fell easily to my blade. I searched the rest of the chapel and claimed a few bits of wealth, no doubt looted from graves and sacrifices. Still, it would do the dead no good now, at least not without these necromancers around.

When I arrived back at the inn and gave Lithnilian some notes he awarded me with some high quality potions. He also left me with a tip: he found a weathered letter rolled up outside of another nearby cave. He said the note was written by a mage named Vangaril and described how his friend Erandur had taken his obsession with necromancy to its ultimate conclusion and become a lich. Vangaril decided attempt to free his friend or, if need be, slay him.

Lithnilian decided to stay clear of this cave as he didn’t seek to tangle with liches and he figured by the age of the note that Vangaril was beyond help. Having just had my own run-in with some local necromancers I had little doubt of Lithnilian’s tale and decided to investigate for myself. While I didn’t exactly want to tangle with liches myself I knew that where such powerful undead creatures were there was usually treasure. Perhaps I was being a bit greedy after having just successfully plundered Bramblepoint. 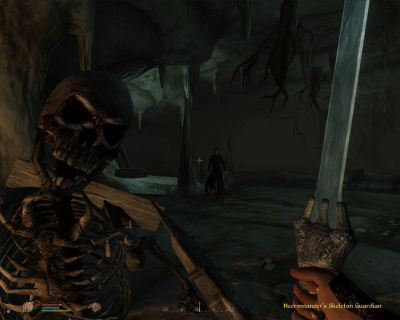 Lost Boy Cavern, as it is known, was quite obviously inhabited by necromancers from the time I swung open its crudely assembled door. There were a few corpses scattered around the entrance hallway in creative ways as an obvious sign to scare off would-be adventurers.

The more I investigated the cavern the more necromancers and their creations I encountered. I also encountered various signs that Vangaril had been here: signs of battle, discarded weapons, consumed spell reagents, and even a few more journal pages. Vangaril had penetrated the lich’s compound! It appeared his presence did not go unnoticed, however, as I found a crumpled note later mocking Vangaril and promising to consume his soul. 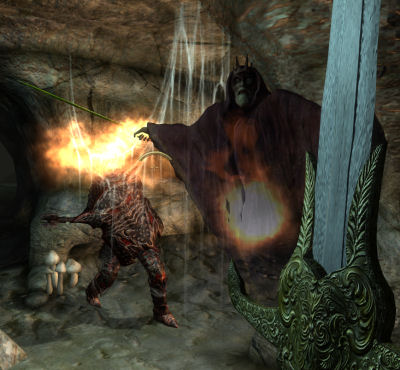 “Damn these things are freaky looking!”

The deeper I ventured into the cavern the more dangerous and exotic foes I faced: wraiths and lesser liches, ghosts and other spirits. This was by far the most deadly place I had visited since first emerging from the sewers beneath the Imperial City. Many difficult battles took place and I found myself stretched to the limits of my abilities, sometimes barely staying alive, often resorting to healing potions and salves. Like my journey into Bramblepoint my expedition into Lost Boy Cavern wasn’t without a silver lining, however. As I suspected I was able to loot all manner of gold, exquisite jewels, exotic spell scrolls and potions, precious weapons and armor and magic items.

Eventually, deeper into the caverns, I found further evidence of Vangaril’s quest. It seems that he had completed his ritual to free Erandur’s soul. I found this surprising considering the number of undead still around. 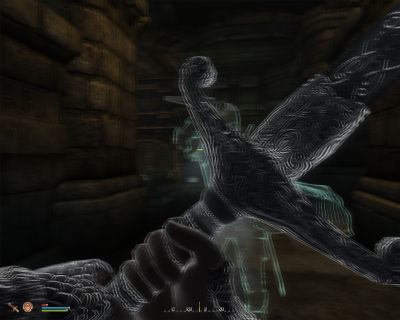 “Trading blows with a Spectral Warrior.”

Finally I entered an area that was more finely structured than the rest of the cave system with natural cave walls and crude brick work giving way to proper stone masonry. I knew I must be getting close to the end of my journey. I was confused to find a small alchemy laboratory containing several more letters, most of the crumbled up. The tone of these letters, most of them angrily directed at the Mage’s Guild, seemed to indicate that perhaps Vangaril’s rites failed after all and that he himself had instead been consumed.

Soon I swung open a pair of heavy, reinforced doors to find the lich himself sitting upon his throne staring down at me. It was obvious that he had been waiting for me. I was still unsure of the exact identity of the lich but had no time to investigate as he began summoning undead animations and casting curses at me with violent urgency. 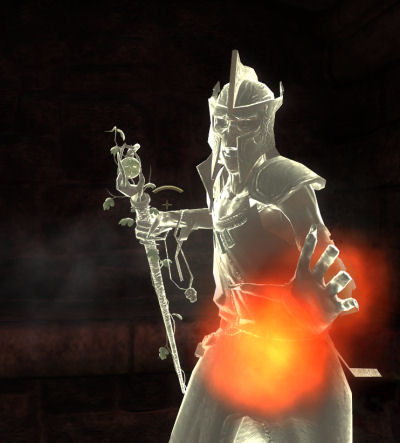 I had little recourse but to draw my silver claymore and charge the foul undead fiend in attempt to overpower him. Unfortunately the lich floated with a remarkable grace and dodged many of my blows, peppering me with painful elemental spells. I concentrated my own magic use on keeping my health. Soon, however, I was able to land a stunning blow and knock the fiend to the ground. Furiously I landed strike after strike, violently hacking the fiend’s unliving vessel to pieces. That was it, the lich of Lost Boy Cavern had been slain!

I limped back to The Imperial Bridge Inn, injured but laden with an impressive amount of loot, and immediately purchased a room for the night. I took the rest of my trip south much more slowly and while I nursed my wounds I began to question my choice of careers. Sure, I had made a huge amount of money, but at what cost? I had almost perished several times.

I managed to make a few thousand gold in gold pieces alone during this trip, not even counting all of the looted items I have yet to sell from the crawls. More importantly I gained tons of valuable skill ups making it to level 25 by the end of this session. I’m getting up there!