Ughhhhhh… it’s been a while! I haven’t been playing much Xbox 360 lately, or much else besides World of Warcraft for that matter, but the one game I have been working my way through is Star Wars: The Force Unleashed. Yeah, the first one – you should be used to me playing old games by now. 😉 Where, oh where, do I start?

I’ve got a long history with Star Wars games being somewhat of an in-the-closet Star Wars geek, and often times the fan service supplied in these games is almost enough to get me through them alone, for better or for worse. In the case of TFU it is definitely for the worse, unfortunately. TFU nails the Star Wars aesthetic fairly well and, as with the vast majority of Star Wars games, the sound effects and music are great. The graphics themselves are pretty solid, even quite nice on occasion, despite a few bugs here and there and relatively minor issues with animation, clipping, and the like. 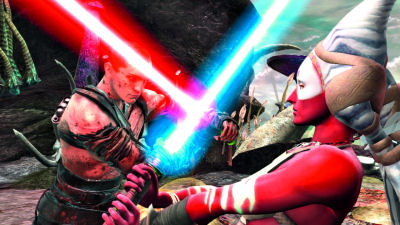 “Shaak Ti about to join the rest of the Jedi.”

Speaking of bugs, despite the game being massively patched since it was first released, there are still plenty of them to go around. I ran into a few major glitches during two different end level boss fights which left me unable to continue and extremely frustrated. I’d have to say that the bugs were a lot less annoying than some of the other things I took issue over though.

TFU plays, more or less, like other “character action” games such as the God of War series, for instance. One big difference though is your force powers, and due to the nature of many of them, it is necessary to have a way to target specific characters and objects beyond the typical melee and direction based targeting common to this style of game. TFU handles this by locking onto the closest enemy that you’re facing and allowing you to change your target at will though the targeting is often way too imprecise in the heat of battle causing you to sometimes lock on to a piece of a wall or a chunk of debris instead of the giant AT-ST currently standing next to you, filling your cloak full of holes. At best this can be annoying and at worst will cause you to die needlessly many times throughout the course of the game. The game is challenging enough without sabotaging you with bad controls. 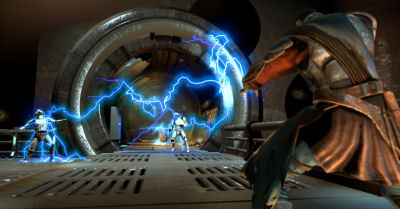 The challenge is something else I have a problem with. There are some sections that are frustrating for various reasons (the infamous Star Destroyer part says hello!) but even allowing for those exceptions I absolutely hated running into hordes and hordes of common enemies that were somehow immune to various force attacks or otherwise frustratingly powerful. Isn’t part of the fun of having all of these amazing powers the ability to trounce people with them and generally cause all kinds of massive havoc? It succeeds some of the time but I often found myself feeling like I had to work a lot harder than I should have to work to get through a level or boss fight. Many of the boss fights took this annoyance up a notch by feeling overly cheap because of the combinations of their various immunities and special attacks.

Not to sound too negative! Graphics, sound, and general “Star Warsiness” aside, I also found myself really enjoying the story. While the tale of Starkiller isn’t exactly incredibly engrossing, it was pretty satisfying (in a shamefully nerdy way) to see how his story fit into the plots of the movies and the general canon Star Wars Galaxy timeline. It isn’t at all unusual for Star Wars games, books, comics, etc. to be considered canon but they don’t often tie so closely to the original trilogy. The endings were quite awesome as well. I chose the light side route (naturally!) and ended up watching the dark side ending on YouTube rather than suffering through the last level again.

“You even kill a ton of Stormtroopers when you work for the Empire. I love Star Wars games!”

So, I suppose I enjoyed TFU overall, somehow. Really, if it weren’t a Star Wars game I probably wouldn’t have completed it, though I’m sure I’ve felt that way many, many times in the past as well. Sadly, I just barely managed to like the overall experience enough that I’m now tempted to eventually pick up TFU2 from a bargain bin despite how much it got slammed in reviews though, that said, I wasn’t exactly desperate to play more of the first game when it was done and indeed will be skipping the DLC for now.

Now where is my damn X-wing/Tie Fighter reboot?

Ok, that title was a bit forced… get it? GET IT?! Surprise! My love affair with awful comedy is still very much intact. 🙂