Returning to look for work in the Imperial City I learned of a man called Umbacano who apparently hired quite a lot of adventurers, explorers, and mercenaries into his employ. It took me little time to find out that he lived in a large house in the Talos Plaza District. I arranged a meeting with him.

After his butler lead me through the manor, past all manner of priceless artifacts and less-than-subtle hints at Umbacano’s wealth, I was greeted by a tall Altmer noble. Umbacano introduced himself as an avid collector of Alyeid artifacts and it was in that vein that my services could be of his use. He mentioned some Alyeid statues known as the Ten Ancestors which were once kept in the White Gold Tower but were scattered across Cyrodiil for safekeeping during the time of the rebellion against the Alyeids. He was willing to pay a generous sum to each of these 10 statues delivered to him. Of course, I was interested. I told Umbacano that I had already explored a few of the Alyeid ruins in the area and he was delighted when I presented him a copy of my landmark maps and notes that I had made for the cartographer in Bravil near the beginning of my journey. He ran over to a book shelf, took down various books, and began digging through them until we had a small list of ruins to start with. A new quest had begun! 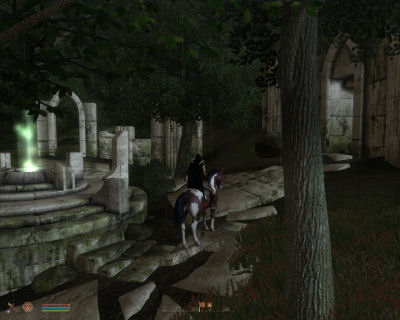 “Actually, these ruins are pretty much fucking everywhere.”

Alyeid ruins dotted the Cyrodiil countryside but the majority of them that weren’t completely destroyed hadn’t been thoroughly pillaged and inhabited by bandits or monsters yet. These ruins are infamous amongst adventuring types for their great number and variety of still working traps and, worse yet, being home to terrible undead creatures. I’m not certain whether these undead are the lost spirits of the elves who used to live and work in these structures or if they’re merely the accursed guardians that were left to watch over these places when the Alyeids were being systematically driven out of the area. In any case, both the danger presented by these threats and the stories passed around about encounters with them have served to keep them relatively intact. In other words, while there was indeed a good chance of locating many of Umbacano’s artifacts it also wouldn’t be an easy task. 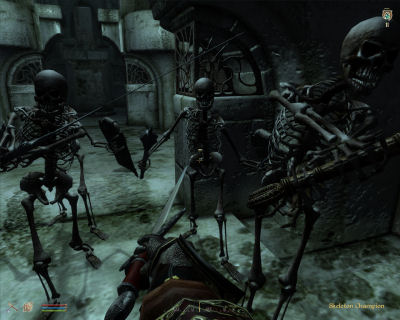 “A Jason and the Argonauts moment.”

Over the next month or so I traveled the region visiting over a dozen Alyeid ruins, seeking out the statues. Upon finding the first the others seemed to come more and more easily, like puzzle pieces falling into place. That’s not to say that my adventures were not fraught with danger. In fact I nearly met my end on several occasions. There were large, hard fought battles versus countless liches, ghouls, undead warriors, and other unworldly fiends. There were mazes and clever traps the likes of which I hadn’t yet seen. In the end, however, with Umbacano’s assistance researching, I was able to claim all 10 of the Ten Ancestors and collect quite a tidy sum in the process, never mind the countless spoils of investigating the ruins themselves.

Umbacano wasn’t done with me though. His next task for me was to acquire a carving that was said to be located in an Alyeid structure known as “The High Fane”. No doubt only a ruin remained, if anything, but he seemed quite intent on possessing this relic. He showed me an illustration of the carving from an old tome he had and gave me an old, rusted key that he said he believed would get me where I needed to go if I could locate the ruin. 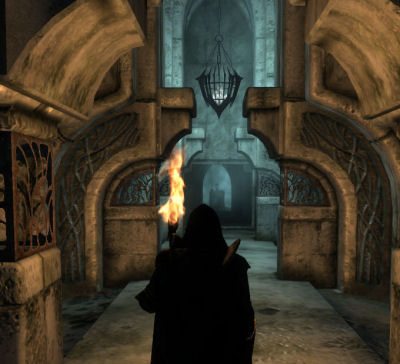 “About to claim my first of the 10 Ancestors.”

With not much to go on, I started checking with patrons at the various taverns across the city when I eventually ran into an adventurer called Claude Maric. The Breton claimed himself also under the employ of Umbacano and invited me to have a drink with him at the Tiber Septim inn. After a few drinks and some casual conversation, in which I let as little information go as possible, Claude eventually brought up the High Fane and after little more nudging, let out that it was another name for the temple “Malada” along with some myths about it being the site great evil. This was lucky break – I had already found Malada whilst creating my map. It was far off, to the far East of Bravil, and quite secluded, but at least I knew where to start. I parted ways with Claude and prepared to set out.

After tying up my horse near the entrance of the ruin I caught a faint odor of smoke which seemed highly unusual for how far into the wilderness I was. Peaked by curiosity, I drew my sword and started heading for high ground from which I could look for the source of the smoke. Quite accidentally, almost tripping over them, I discovered two people, still sound asleep, at a small camp nearby. They looked like adventurers or even mercenaries. I thought this odd, but let them sleep. As I made my way back, more carefully surveying my surroundings than before, I spotted the silhouette of another man on a nearby hill. I casually approached him, sword sheathed. 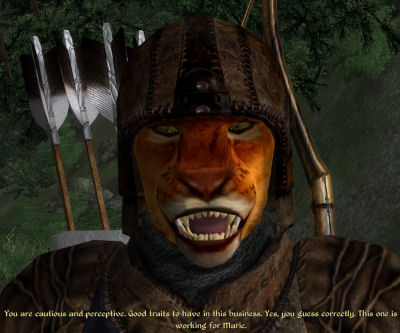 The Khajiit seemed surprised to see someone else and, at first, plead ignorance, claiming to be part of a small hunting group who were camping in the area. The Khajiit was a poor liar, and besides the men were definitely not armed like simple hunters. I pressured him a bit more and he admitted that him and the others had arranged to meet another here in a few hours to attempt to clear the ruins of Malada. In exchange for a small bribe he offered to signal me when they arrived if I was planning on going in first – I accepted. Whether he would hold his end of the deal or not was another story. 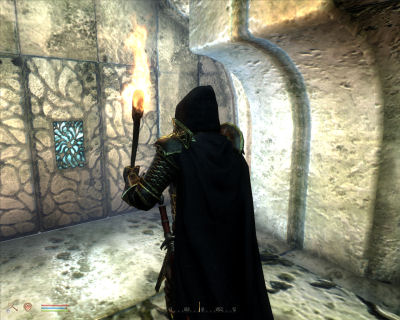 “I came all this way for this fucking thing?”

The High Fane wasn’t too much more interesting than some of the Ayleid ruins I had visited recently, some traps, some undead creatures, and a small amount of abandoned treasure. I eventually discovered the room with Umbanaco’s carving. This area was sealed with a locking mechanism the likes of which I had never seen which inspired me to take extra time to look for signs of a trap around it. Thankfully the key I was given opened it without incident and I was able to pry the carving from its wall without too much difficulty. 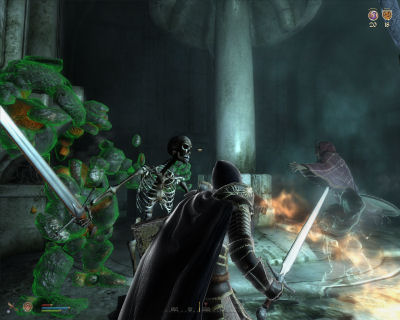 As I emerged back into the now midday sunshine the situation got much less typical – I was greeted by my new friend Claude Maric, flanked by several armed men at each side. Claude demanded the carving, assuring me that it was only business. This, unfortunately for Claude, was not how I did business. When I outright refused to give up the relic Claude ordered his men to attack me. It was a close fight, having to fend off 3 separate attackers at once. When things were getting a little close for me I was surprised to have one of Claude’s men distracted away from me than none other than Khajiit I had talked to early. Unfortunately he was quickly slain as another mercenary joined the fight. Still, the distraction gave me the space and time I needed to use my magic to finish the fight. 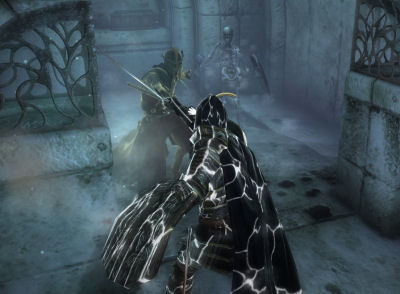 “Is it hot in here or am I just being electrocuted?”

As I dusted myself off and turned around I caught Claude running off towards where the others had camped out earlier. I gave case and soon we too were engaged in a sword fight. Unfortunately for Claude he was much less of a fighter than his status as a treasure hunter might imply and he too soon lay dead at my feet. After searching the bodies and packing my loot I mounted up and began the long ride back to the Imperial City.