Having seemingly exhausted my supply of fresh work with the death of the would-be Ayleid king Umbanaco I’ve decided to take leave of the Imperial City once again. While I’ll keep it my base of operations for now it seems almost as if the city exists inside of a bubble where matters of the rest of realm have little bearing on life within. Not a good place for work unless you join the guard and even then I’d suspect it none too exciting unless you get a great thrill out of putting irons on pickpockets. Instead I’ve decided to ride east to the city of Cheydinhal where I’m told I can join the Fighters Guild. With this I hope to be able to receive some extra training, keep a closer ear to news from around Cyrodiil, and of course get some steady work, even if it does reward the guild’s honor more than my own.

At the Fighters Guild guildhall in Cheydinhal I’m directed to an Orc named Burz gro-Khash. While a few of the other guild members have at least a passing knowledge of me, Burz does not, and combined with his usual Orcish temperate, I expect little comfort from him as I work my way through the ranks. Indeed for my first assignment he’s given me little more than an errand to run, delivering supplies to some other guild members planning to clear out a nearby cave infested with goblins. Though the Orc tries to test me, it is only a test. Besides, stirring up an organization such as the Fighters Guild would be exceedingly counterproductive to my goals. 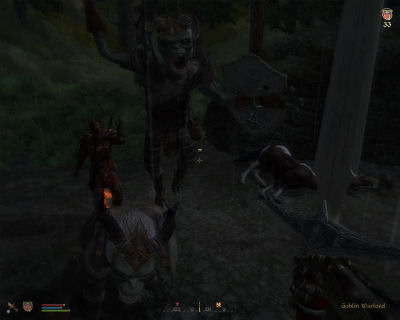 I receive quite a warm welcome to Desolate Mine. A pack of savage goblins ambushed me and slew my horse before it was over. Of course, they all paid. Inside I deliver the supplies. Impressed by my handling of the goblins outside, the other members have asked for my sword in cleaning them out. Naturally I accept. Between the four of us the goblins are no match. Unfortunately numbers didn’t appear to help the numerous dead miners we’re finding in the lower depths. I’m not sure what caused this incursion but whatever it was, the mine is now cleared. Burz is pleased with our performance and has advanced me from Associate to Initiate rank in the guild. The bad news is that if I want immediate work I’ll need to go elsewhere – he says the Anvil hall currently has a healthy backlog of jobs. It’s a long ride out west but it has been a while since I’ve visited the port. 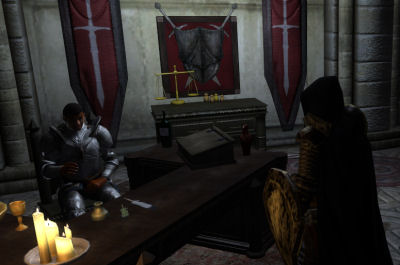 “Speaking with Azzan, head of the Anvil Fighters Guild.”

Burz was right. The guildhall at Anvil is bustling with activity. I’m directed to the head of hall here, a Redguard named Azzan. His first contract for me as an Initiate is to deal with a rat problem in a local woman’s basement. Surely, despite my rank, he can tell from my arms and the way I carry myself that I am no novice fighter. Still, as with Burz, perhaps just a test. I go to visit the woman. Arvena Thelas, a Dunmer, apparently isn’t the victim of a rat infestation but rather she keeps pet rats and something has been killing them. Upon investigation I find a mountain lion in her basement, catching it in the act. The beast immediately turns on me as I disturb it but I’ve fought large cats many times before now and am able to quickly put it down. Anvil city seems like an unusual place for mountain lions. Arvena suggests I contact Pinarus Inventius, a local hunter, to help track down the beasts and thin their numbers. 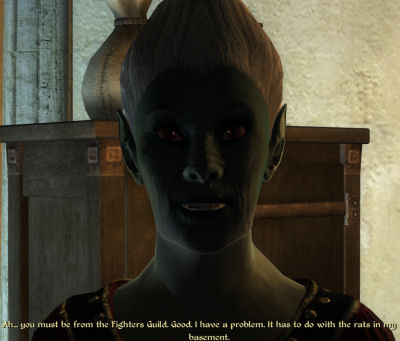 Pinarus gladly accepts the task and volunteers to take me to some spots in the foot hill outside of the city walls where he suspects we might find them. Sure enough, after a short hike we spot a small pride gathered under some trees. I summon one of my more destructive fireball spells and kill them all in one large blast. I return to Arvena to collect my fee but she’s not pleased to hear the news – apparently there’s already another mountain lion in her basement. I quickly put it down too but by the Nine, what could be luring them down here? She suspects one of her neighbors, Quill-Weave, could be responsible as she’s expressed a strong dislike for the rats before.

I seek out Quill-Weave, an Argonian woman – apparently a famous author. She quickly sees through my questioning and rejects any notion that she could be responsible. I’ve decided on another approach. I’ll simply hide outside of Arvena’s basement, near the hole that the mountain lions have been entering through, and see what happens. Sure enough a few hours later, after night has fallen and most have extinguished their candles and torches, I spot Quill-Weave sneaking to the hole and tossing some rotten meat nearby. As she turns to leave I confront her. She continues to deny it at first but caught red handed she finally tells me the truth. She was hoping to lure the rats out so that the city guard would find them and dispatch them – she knew nothing about mountain lions. She begs my mercy and so I accept as I believe her story and her desire to avoid conflict with Arvena. I tell Arvena that she was mistaken about the Argonian and accept my reward, hoping that I closed this contract with the least amount of turmoil for all involved. 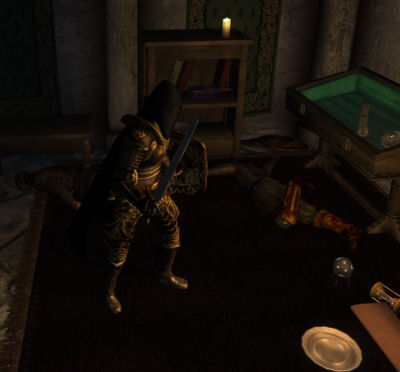 “I might have destroyed your shop, but I got the burglars!”

Azzan’s next contract for me is a little more interesting. Apparently a local shop has been getting burgled regularly during off hours. I head over to Lelles’ Quality Merchandise on the docks and speak with Norbert Lelles, a friendly Breton. He suggests simply handing me the keys for the night and leaving me to take watch in the dark while he heads to the tavern next door. Simple enough.

I’m sitting alone in the dark here for hours. I hear faint whispers and the unmistakable sound of boards creaking beneath heavy feet… the door opens. Three men, armored and armed, creep in. I draw my sword from its scabbard and command them to halt, ready to give chase in case they flee but, surprisingly, they draw their weapons themselves and surround me. The battle is chaotic and bloody, leaving three corpses and a mess of merchandise in Norbert’s floor. After fetching Norbert he seems quite pleased by the result though rather disturbed by the fact that all three men used to work for him in the past. Azzan is pleased as well and I’m being promoted to Journeyman.

Azzan has informed me that the next contracts suitable for someone of my rank would have to be assigned at the Chorrol guildhall. It has been quite a while since I’ve visited Chorrol but my last stay there was fair enough. It’s a fairly lengthy journey when taking safe roads, which I plan on doing. Upon entering the city I’m already hearing rumors about the guild – not surprising since both the Fighters Guild and the Mage’s Guild have a strong representation in the city. The talk on the streets seems to be fairly negative. I’m greeted by a Dunmer called Modryn Oreyn who seems to have little patience for new recruits. After explaining my assignment I think I know why: I’m to ride to Skingrad to look for a new recruit who has defaulted on his contract. 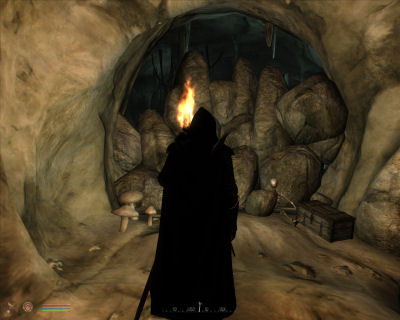 After my journey I immediately ask a city guard manning the gates if they knew of the man, Maglir. The guard is usually a good source of information as long as you can find one of the less stern ones. I’m told that Maglir can usually be founding drinking at one of the city taverns so I’m heading that way. Sure enough, Maglir was sitting alone with an ale at the West Weald. He seemed to know why I was there. He explained that although his task was simple, to retrieve a journal rumored to be in a local cave, the contract wasn’t paying enough for the risk. I asked him about this several times, and every time he shrugged off my statements with less and less concern. He suggests that if I want the contract I can have it, and that he suspects I can find the journal in Fallen Rock Cave.

I’ve decided to make my way to Fallen Rock Cave this morning to try to close out the contract. I’ll decide what to do after that. Maglir might be a dishonorable coward but he wasn’t wrong about the dangers lurking in this cave. It is quite infested with undead and considering the ruins I’ve been clearing out lately that’s saying something. I fought many skeletons, wraiths and ghosts in the this place, even a lich, and eventually I located the journal in a flooded passageway on the lowest level of the cavern. The loot isn’t spectacular but at least I’ll return to Chorrol with the job complete. In Chorrol Modryn is pleased enough about the contract being finished but demands to know what Maglir’s role in this was. Given Maglir’s disposition about the whole or ordeal I do not deny the truth and tell him about Maglir smugly defaulting. 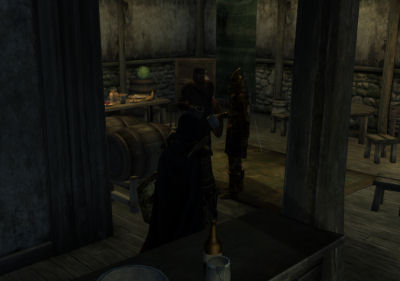 “Another bar… I’m starting to sense a theme here.”

Modryn’s next job for me is in Leyawiin. An exceedingly long ride from here but apparently this is the life of a guild member who volunteers to travel rather than only work locally. Apparently there have been reports of some other members causing all sorts of trouble in the city’s taverns and inns. Sure enough, even after the long ride I catch them red handed in the Five Claws Lodge. The men plead their ignorance but in their drunken stupors admit their guilt as well. Still, their excuse rings true enough: the men claim that the Blackwood Company has been grabbing up all of the work in the area and that they’ve got nothing better to do without contracts. After reassuring the bartender that the guild would have them out of her hair soon I left to canvas the city for potential work.

After a few referrals I’ve found a local alchemist who, after being offered some rare reagents that I’d gathered on the last job, has agreed to contract with the guild for some other alchemical components. I return back to the Five Claws to give them the good news and the details. They seem genuinely happy about the opportunity for honest work again. Returning to Chorrol, Modryn is quite pleased with my work as well and has decided to raise me to rank of Swordsman, making me a full member of the guild at last. Perhaps I’ll get some less lackluster jobs now…