I’ve been seriously slacking on this update as I’ve been playing this game for well over a month now. Ugh. Anyway, Warhammer 40,000: Space Marine! 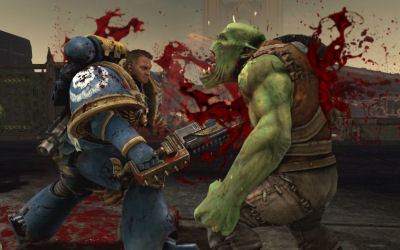 “Expect to be utterly drenched in Ork blood at least 70% of the time.”

I know I’ve talked about it many times on here before now: I’m a Warhammer fan. I admit that I was a little skeptical about Space Marine for various reasons but when I heard that the multiplayer was apparently quite fun in preview events I decided that it would be cool to dedicate myself to an online game again, if only for a little while. Preorders (for the Xbox 360 version) were launched and, after a minor screw up with Amazon, I got my copy almost on release day. Since I was dedicating myself mostly to the multiplayer I, quite uncharacteristically, skipped the single player campaign and dove right in.

First, the game. It’s developed by Relic Entertainment, the same guys who made the excellent Dawn of War games. Good pedigree, I think most would agree. The odd thing is that Space Marine isn’t an RTS game, it’s a 3rd Person Shooter with a side of “Character Action” which is definitely a bit of a departure for Relic. It was also released on consoles along with PC, again, a bit of a departure for them. You play as an Ultramarine captain attempting to secure some objectives (chiefly an Imperial titan) on a forge world during a massive Ork invasion. The forces of Chaos also make an appearance (don’t they always?) You do a little over the shoulder shooting with bolters, plasma weapons, and the like but probably more notably you’ll spend a lot of time wading into the huge mobs of Orks slicing and dicing with chainswords and power axes. Occasionally you’ll also strap on a jump pack and go leap-frogging off of enemy heads while smashing them down with a massive thunder hammer. Talk about fun! The campaign itself is a pretty linear experience and while I’d imagine it might be pretty mundane for most people there’s plenty of fan service here if you’re a Warhammer 40k fan. So yeah, when I did finally play it I enjoyed it. 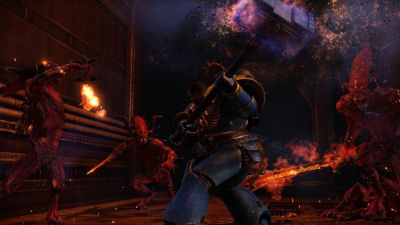 Anyway, back to the multiplayer: tons of fun! I’ve never played anything quite like it. The closest comparison, and one that is drawn often, is probably Gears of War, though it feels substantially different in numerous areas and anyone who thinks this game is just some shoddy Gears clone is definitely quite mistaken. I particularly loved the flexability and balance between the three classes: Tactical, Assault, and Devastator (and their Chaos equivalents.)

Loadout and armor unlocks and customization can be a little basic compared to some other games with persistent unlock systems these days, but there’s still plenty of variety and the new rewards come reasonably quickly. The weapons and their various perks provide quite a bit of variety and I felt like most of them were nuanced enough to give experimenting with different load outs and/or going for each weapon’s associated unlocks a good amount of depth. Personally, my favorite tactic was to run around as a Tactical Marine rocking either a melta gun (essentially a very short range shotgun) or a storm bolter (similar to sub-machine guns in many games) using the class’s dodge roll maneuver to gain ground on long range opponents or out-position Assault marines. I also enjoyed my grenades and sometimes took the extra damage and/or extra grenade perks when I was feeling a little cheap. Other highlights: The heavy bolter, which the Devastator starts off with, is amazing once you get a feel for it, and the Assault class is all kinds of fun in and of itself. 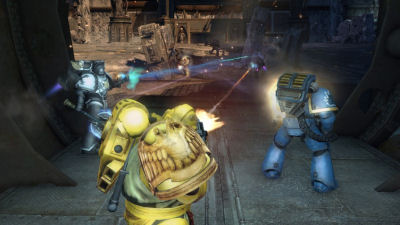 “This would be a fairly accurate screenshot of multiplayer if it weren’t for the teamwork depicted.”

Anyway, all said I really enjoyed my time with the game and plan on dusting it off again soon with the recent release of the free Horde-like co-op DLC and the announcement of future paid DLC. It is kind of a shame that the game had to release so close to Gears of War 3, never mind it’s generic name, because I really feel like it was passed over by too many people who would have probably loved it. Still, following some of my favorite gaming forums it seems that the game definitely did take hold with a lot of people, particularly on PC, so maybe there is some hope for an eventual sequel.

I also played Warhammer 40,000: Kill Team on Xbox Live Arcade which is… well, absolutely nothing like Space Marine. It’s a fairly simple, fairly typical Twin Stick Shooter set in the Warhammer 40k universe – you pick your class, which determines your weapon, special attacks, etc. and make your way through a giant space hulk slaughtering Orks. Tyranids also make a bit of a cameo at one point as well. 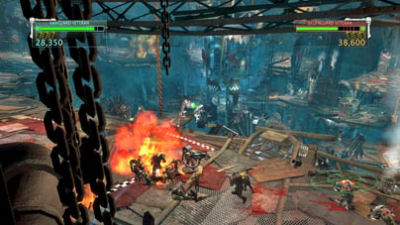 I played the demo and wasn’t too impressed but figured I might pick it up eventually… then I got Space Marine and learned that thanks to a bit of cross promotion the only way to unlock the Assault class’s power sword in multiplayer was by playing Kill Team and, what do you know, I was sold! I played through the campaign co-op and, all in all, a few annoying/frustrating sections aside, I had fun with it. The achievements didn’t hurt either. 😉

A bit Warhammer’d out for a while, on to the next game!

As usual, not much in the way of good screenshots… which surprises me since *at least* Space Marine was also on PC, but I suppose not enough good blogs and forums go out of their way to make sure their images are indexes. :/ These are PR shots with no GUI shown but they do at least represent the game. The Kill Team one is accurate but simply not a great shot.