I hoped that I was in for a more interesting assignment when Modryn called me into his office on the upper level of the Chorrol Fighters Guild but no such luck – it was Maglir yet again! Modryn explained that he appeared to have defaulted on another contract and he wanted me to ride to Bravil to check out the situation and finish out the job if possible. 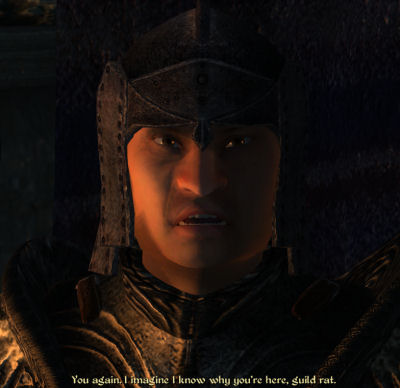 “Incredible that he could guess considering that this is the second time I’ve had to check up on his lame ass.”

Upon reaching Bravil my first order of business was to attempt to locate Maglir. Asking around town yielded immediate results – citizens and guards alike knew of him quite readily and pointed me to The Lonely Suitor Lodge on the south side of town. As I walked up to the bar Maglir slowly turned to me, a look of recognition quickly turning into a sour expression. He greeted me by calling me a rat, asking if I was there to check up on him for Modryn again. This time he wasted no time trying to dance around the truth or feign pleasantries and bluntly told me that he had left the Fighters Guild for the Blackwood Company and that we’d need someone else to finish out his previous contract. I could tell by the body language of his Argonian friend, dressed in similar Blackwood Company regalia, that he wasn’t thrilled with Maglir potentially starting a brawl in public, so I decided to simply return to Modryn and let him know what I had discovered.

Modryn was furious to learn of Maglir’s defection though his focus quickly turned to the Blackwood Company themselves, as he claimed that, losing members to them aside, they had been taking a lot of work from the guild recently, especially down in the south. Modryn told me that my next assignment was to meet up with a woman named Aryarie who was to be Maglir’s contact in Bravil. Aryarie was at the Bravil Mages Guild and was none too pleased with the Fighters Guild’s lack of progress on her contract so far. I could see why – it was a simple enough task. She needed to gather some Imp Gall for some alchemy research she was conducting. I humbly offered my apologies and told her that I’d deliver her double the Imp Gall for the same fee to make up for our poor performance up till then. 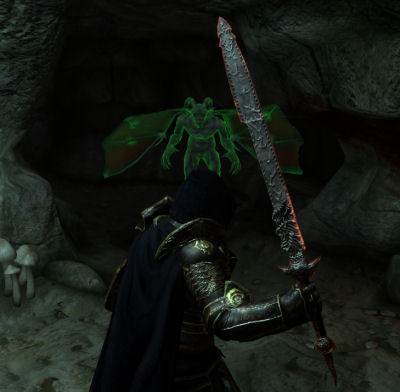 “Imps are one thing but Gargoyles? Ugh.”

Imp Gall was, of course, found on imps. Given all of the imps I’d encountered since I began my adventures you’d think I’d have a massive stash of them by now but I had been frequently selling my alchemical ingredients on my regular Imperial City market visits and didn’t have enough on me. Luckily imps were relatively common pests to run into in secluded areas and sometimes even congregated in caves and ruins. With some luck, the first cave I visited outside of Bravil, Robber’s Glen Cave, had quite a population of the little fiends. I cleared out the cave with little effort, save for that spent on the occasional gargoyle amongst them, and the bodies brought back to the city to have carved up.

Aryarie was quite pleased with the quality of the Imp Gall I brought her and gave me an enchanted ring as a token of her appreciation. Another job well done by the Fighters Guild, despite Maglir’s meddling. 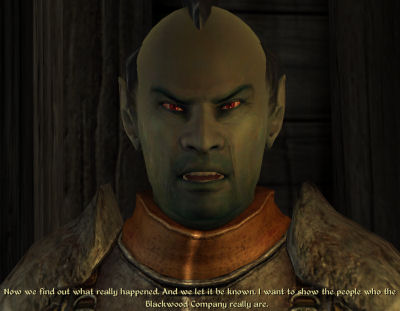 When I spoke to Modryn upon returning to Chorrol he seemed to be of an odd demeanor – he covertly asked me to meet him at his home later that night. That evening Modryn laid out his suspicions about the Blackwood Company’s involvement with Azani Blackheart, a well known and powerful outlaw. The Fighters Guild had taken a contract from a mage named Argoth to retrieve Azani’s enchanted sword, Sinweaver. The guild raided the ruins where Azani had been known to be hiding out with an impressive band of twenty brothers in arms but was routed without being able to defeat Azani, losing fifteen of their number before pulling back to safety. The Blackwood Company claimed it completed the contracted afterwards, both establishing themselves as a legitimate rival to the Fighters Guild and making the guild look inferior in the process.

Being involved in the original raid personally, Modryn had doubts about the Blackwood Company handling the task which such apparent ease, particularly when Argoth was found to be mysteriously killed shortly afterwards and with no sign of the sword Sinweaver left behind. Modryn instead suspected that the Blackwood Company had made a deal with Azani to fake his death and later retrieve his sword from the mage. Modryn had apparently been harboring these suspicions for some time but was finally ready to uncover the truth. He wanted me to go back with him to Azani’s hideout in the ruins of Arpenia – he stressed the dangers inherent in this mission and that my participation was purely at my digression but I saw no reason stay behind, and if Azani was really such a threat Modryn would need all the help he could take. 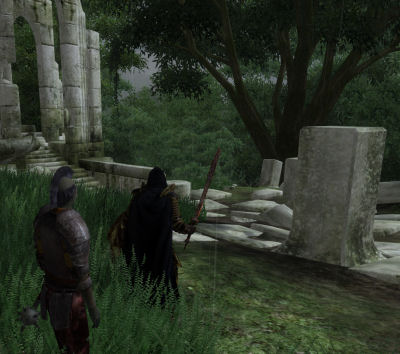 “Quietly stalking up to the ruins…”

The two of us met just before sunrise in front of the Chorrol guildhall and road out together for Arpenia. After breaching the doorway into the lower catacombs we both slowly crept under cover of darkness through the corridors, weapons drawn and tensions high, but before I knew it we had reached the main chamber with no sign of anything save a few rats. In the main chamber there were no bodies or much of anything else and indeed no sign of any recent battles. Modryn sheathed his sword and, a look of disgust washing over his face, proclaimed that his suspicions were likely correct. After a little cursing he suggested I check the rest of the ruins while he did some research. As suspected the rest of the ruins yielded very little as if most of the items of significance were relocated in an orderly fashion. When I returned the surface I found Modryn near our horses studying some maps.

Modryn suspected that, in accordance with whatever deal the Blackwood Company had struck with him, Azani had relocated to another Ayleid ruin, likely somewhere nearby. He guessed that it would most likely be Atatar, not far to the northeast. We road a short distance towards the ruin then lead our horses before finally leaving them and quietly walking the rest of the way towards the entrance. While the outside of Atatar was quiet there were obvious signs of recent, heavy foot traffic around the entrance. We drew our swords and entered. 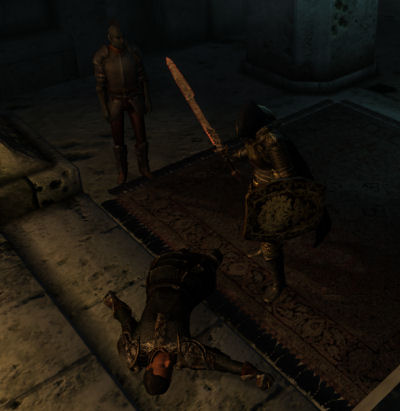 Unlike the last dungeon we almost immediately encountered bandits in some of the larger rooms in this one – some camping, some obviously patrolling, but as unusual as the presence of a large number of bandits occupying an Elven ruin might be it wasn’t necessarily a sign of Azani’s involvement. The two of us managed to take down every bandit we encountered without making too much noise and spreading the alert of our presence. When we reached the main chamber of this ruin, however, we found Azani Blackheart himself waiting for us. Azani seemed surprised to see us but not at all unprepared to face us. He drew his blade with one hand as flame rose from the other. He charged Modryn, likely recognizing him as a leader of the last assault, while hurling a firebolt at me. I dodged and rushed to flank him. As Modryn and I desperately attempted to land blows Azani skillfully weaved away from and occasionally deflected both of our strikes while peppering us with his own. Still, as frantic as this fight was it was only a matter of time before someone was hit and luckily it was Azani who ended up falling, my blade plunged hilt deep into his Elven mail.

After catching our breaths and seeing to our wounds Modryn and I split up as he searched and looted Azani’s chambers and Azani’s body, making sure to recover his signet ring and, of course, Sinweaver. Upon handing the ring over to Modryn and cautiously exfiltrating the ruin, the job was complete…