The Lost and The Discovered

While I had visited a few Mages Guild guildhalls in various cities to trade in the past I was sure I would meet a whole host of new individuals if I were to actually become a member of the guild. I had high hopes that between my ability with magic and my stations with the Fighter’s Guild and now the Imperial City Arena I’d have absolutely no problem joining up. Not so! The mages at the Arcane University were quite standoffish towards outsiders and, in addition to barring my entrance, only disinterestedly referred me to visit guildhalls in other cities when I inquired about recruitment. Fair enough. I packed up and rode for the nearest city, Bravil. 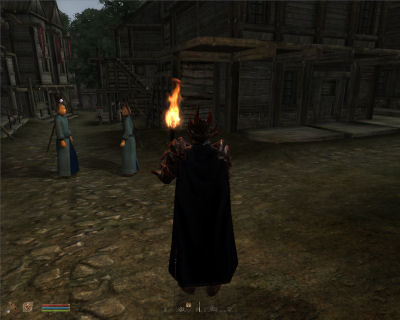 In Bravil I was directed to speak with Kud-Ei, the head of the guildhall. Thankfully Kud-Ei was much more friendly and forthcoming with information than her guildmates in the capital. She explained to me that to join the guild I’d need to receive a recommendation letter from the head of every Mages Guild guildhall in Cyrodiil and that typically these recommendations were earned by completing tasks and jobs. So, essentially, I’d be working for free for a while. While this didn’t sit well with me it was, after all, a means to an end. Kud-Ei already had a task in mind for me her recommendation and it sounded simple enough: one of the guild members under her charge, Ardaline, had her Mage’s Staff stolen from her and I was to recover it. 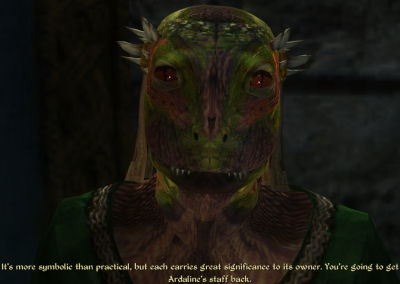 “More symbolic than practical eh? Like the Queen of England!”

Kud-Ei told me that she had received information that suggested that a local Dunmer bard named Varon Vamori might know more about the staff and gave me some charm scrolls to help along with getting him to cooperate. I canvased the city and eventually found Varon on his way into the Great Chapel of Mara. I was able to pull him aside without attracting too much attention. Surprisingly, Varon fessed up immediately. It turns out he had been unsuccessfully pursuing Ardaline for quite a while and, to Elicit a response from her, finally lifted her Mage’s Staff. He apologized profusely, seemingly very concerned about how Ardaline would react when learning about his deception. Unfortunately he couldn’t actually produce the staff as he had sold it to one of his friends. Of course! Soris Arenim in the Imperial City was my next target.

After riding back to the Imperial City I was able to locate Soris in his home in Talos Plaza. Soris was hesitant to part with the staff but after a little coaxing agreed to sell it to me. Probably due to my insistence on acquiring the item, the Dunmer’s greed immediately came out and he started demanding more and more for it. Finally we settled on 200gp which seemed reasonable enough considering the unique value of a Mage’s Staff to its owner and what acquiring it would do for me. Soris seemed quite pleased with this little transaction, no doubt netting him quite a profit, but this was of little importance to me – off I went, back to Bravil!

Kud-Ei promised to send off my recommendation and also offered to teach me a spell in thanks for returning the staff. I had earned my first recommendation. 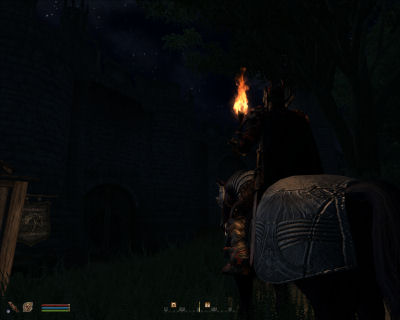 I continued south to Leyawiin wherein I sought Dagail who I was told was the head of the guildhall there. Oddly enough, Dagail seemed to speak in confused riddles when asked about a recommendation, eventually referring me to another guild member, Agata. I found Agata elsewhere in the guildhall and she cleared up the situation. Apparently Dagail had been gifted with prophetic visions her whole life. These visions were intense enough that she had to wear a special amulet to suppress and at times focus them. Unfortunately she had recently lost the amulet causing her mind to be assailed and her thoughts constantly distracted. The amulet’s existence had been kept widely secret from the guild members but Agata suggested I start with asking them about the situation directly. 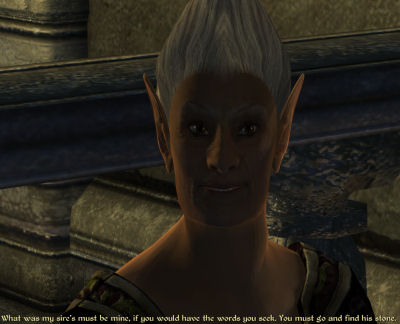 “What in the world is this old bat rambling about?”

No one had anything too ill to say about Dagail or the guildhall’s leadership in general, nor any clue about any amulets or seer’s stones, with one exception: a Nordish man named Kalthar seemed rather annoyed with Dagail and everyone knew it. When I spoke to him and pressed him further, he ranted about how she didn’t deserve her position within the guild, and how it was unfair for him to have to work under someone who was only kept sane because of a magical trinket. When I asked how he knew about the amulet he admitted that he had overheard Dagail and Agata talking once. He continued to rant for quite awhile, even mentioning Dagail’s father and him being unceremoniously buried despite his service to the Emperor, oddly enough. I decided to asked Agata and Dagail about Dagail’s father. Agata knew nothing useful but told me she’d keep an eye on Kalthar. Dagail herself spoke in riddles but seemed to hint that I needed to check the spot where her father served and fell, Fort Blueblood. I might have been wrong, but it all seemed to make sense, and the ruins of the fort were close enough so I headed out to investigate. 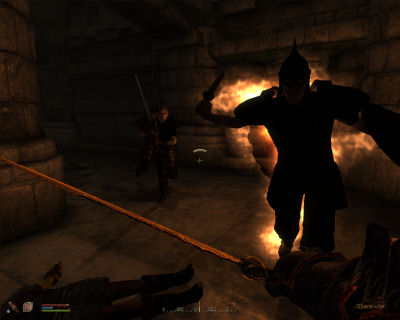 “It just wouldn’t be a Garn update without something on fire.”

Fort Blueblood was teaming with bandits but I dispatched them quickly enough as I moved through the ruins. In the lower levels I eventually discovered a long forgotten burial chamber and, upon searching thoroughly, discovered what I believed to be the sarcophagus of Dagail’s father and an amulet that resembled the one described to be by Agata. There’s must have been another one of these amulets and perhaps Dagail’s father needed it for the same purpose as she did. Just as the puzzle pieces about Kalthar’s resentment towards Dagail and his knowledge of her father’s burial place started coming together in my head I was interrupted by a voice from behind. Kalthar had followed me. 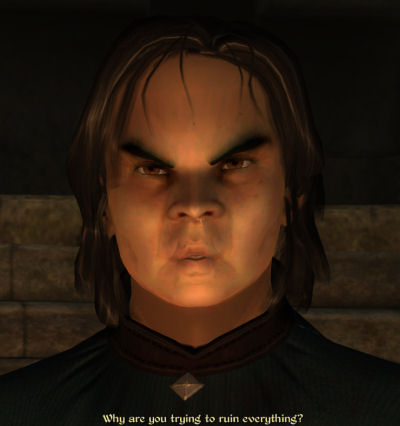 “I ask myself that all the time…”

Confirming my suspicions, Kalthar told me that he couldn’t let me leave with the amulet and that he had taken the other one in hopes of getting Dagail removed as head of the Leyawiin guildhall. I was obviously ruining his otherwise masterful plan by my involvement. I drew my sword and attempted to pass him but as I approached him he lunged at me with a powerful burst of lighting. It was foolish of Kalthar to challenge me so directly – obviously the actions of a desperate man. As he prepared another lightning burst I hurled a fireball at him and dove at him with my blade. He fell quickly and I returned to the city to deliver the news, and the amulet, to Dagail.

Dagail was most pleased about receiving the amulet and having her mind back in some semblance of control. Agata told me that Kalthar had been a very ambitious mage for as long as she’d known him, even being a necromancer until it was outlawed. He was one of the few who decided to abandon the craft rather than leave the guild. Apparently he had never abandoned his lust for power and control though. My recommendation was secured. 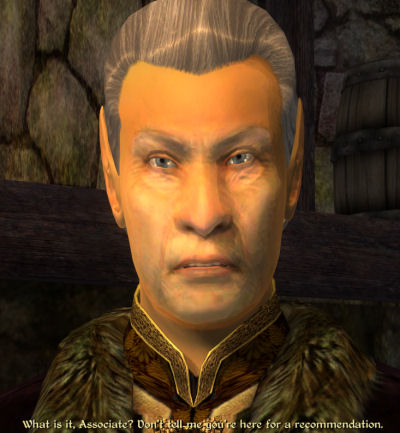 “Yeah, it’s not exactly a big thrill for me either, asshole.”

I rode back up north for Cheydinhal. After the long ride I was greeted at the guildhall by the head mage there, Falcar. Falcar had a simple task – to find and recover a missing enchanted ring for him. He thought it might be at the bottom of the guildhall’s well and directed me to Deetsan so that she could unlock it for me. Deetsan agreed to unlock the well but wanted to speak with me further about the situation… in private. I met with her in one of the other chambers of the hall a short time later and she told me that I was not the first Associate to be given this task. Another, Vidkun, went looking for the ring and went missing thereafter. She cautioned me that Falcar might be trying to get me killed and to very wary while performing my task. She also gave me a scroll of waterbreathing to help me along the way. 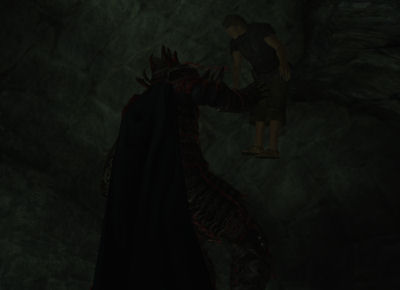 “Ah ha! I found out why your water has been tasting so funny lately.”

Deetsan’s suspicions may have been correct. I located the ring and Vidkun’s body at the bottom of the well. The ring appeared to be enchanted to burden the wearer with an incredibly heavy weight – it was all I could do to heave the ring up but alas I could not climb the ladder out of the well while holding it so I dropped it to the bottom yet again. Apparently Vidkun had the misfortune of drowning trying to attempt the same task. When I approached Deetsan with the news she seemed to already be in a state of anxiety. She told me that, still angry about her suspicions about the task Vidkun and I had been given, she confronted Falcar after I had left. When she told Falcar that she had helped me he flew into a rage. When she threatened to report him to the Council, he stormed off. She suggested I not worry about it and check Falcar’s office to see if he might have already prepared a recommendation letter for me. 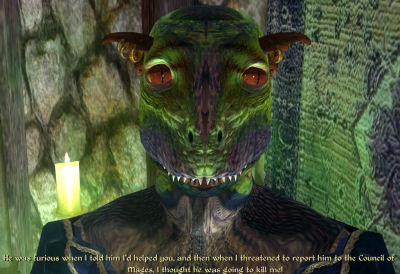 “Further proof that Falcar is a prick.”

I briefly looked around on Falcar’s desk but saw no sign of a recommendation. I did find something a unexpected, however: two Black Soul Gems. Black Soul Gems were a special type of Soul Gem usually only used in necromancy that allowed trapping the souls of humans. Nasty indeed. I took the gems and brought them to Deetsan who couldn’t believe the sight. She told me she’d have to report Falcar to the Council of Mages and would write my recommendation herself.

I was surprised to find so much necromancy within the ranks of the guild, and so quickly, but I quickly dismissed this as coincidence and saddled back up to ride for Bruma.