Traven was, of course, disgusted over the grim news of Mucianus’s fate. He spared little time to grieve however and moved quickly on to tell me about my next job. I’d been personally requested by Count Hassildor to speak with him at Castle Skingrad. Apparently the Count had some vital information for the guild. I wasn’t sure exactly why he would want to speak with me personally though after my last visit with him I had a few theories. I rode out from the stables within an hour of the conversation. 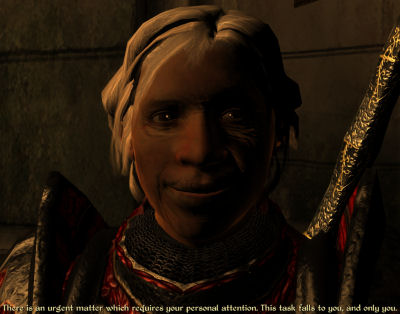 Upon reaching Skingrad and arranging an audience with the reclusive Count he told me that after our last meeting he had developed some level of trust in me and respect for my combat abilities and that my position within the guild made me the ideal candidate for his task. He wanted me to do him a favor in exchange for the information he had – I was to dispatch of a group of bloodthirsty vampires that had recently taken up residence in the nearby Bloodcrust Cavern. Apparently they had been getting bolder and bolder with their attacks and he predicted that it would be only a matter of time before they started feeding within the city. A big problem. Additionally, he had learned that a group of vampire hunters had heard rumors of vampires in the area and had come to Skingrad to investigate. The Count was uncomfortable with the presence of this band of vampire hunters in his city and wanted to make sure they left before causing any sort of trouble. He was hesitant to be directly involved with either scenario which is, of course, where I came in. 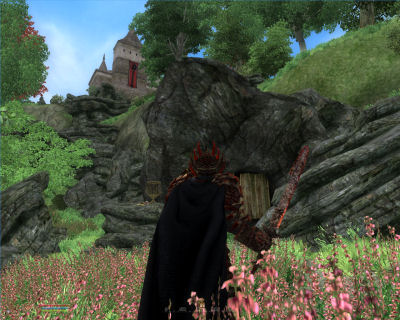 Not a problem! I visited Bloodcurst Cavern and skulked through the darkness, slitting the throats of the unsuspecting vampires one by one. Sure, some of them put up some fierce resistance, as vampires are known to do, but for the most part they didn’t seem to be prepared for anyone to come calling on them. I cut the head off of one of the uglier ones, put it in a sack, and visited Skingrad city to try to find this group of would-be vampire hunters. Eventually I found Eridor, a rather rough looking Bosmer and the adventurer in charge of the band, chatting up a barmaid at the Two Sisters Lodge. He was a little rude with me when I approached, having obviously acquired a good deal of arrogance alongside the fame gained from his status as a vampire hunter over the years. I told him that the vampires he and his men were seeking had all been slain. He scoffed at me and asked if I had any proof with an incredulous tone in his voice. I emptied the sack out on his table. He was taken aback but seemed satisfied with the proof. 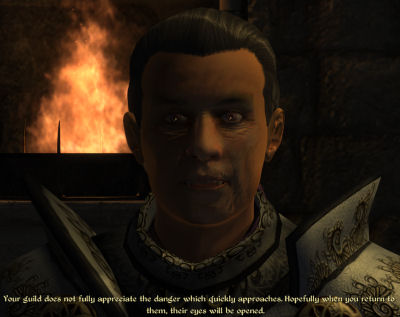 Finally back at Castle Skingrad the Count was ready to share his important information with me. It seemed that he had learned that Mannimarco, the so-called King of Worms, an incredibly powerful necromancers of much infamy, had returned to Tamriel. While I wasn’t familiar with the stories of the King of Worms it was quite obvious from the look on his face that Count Hassildor believed what he was telling me and in the extreme danger it presented. He urged me to return to the Council with this information posthaste. I rode as quickly as I could and, when I finally found Traven, he seemed almost shocked by the news and left to form an emergency session with the Council almost immediately.

I didn’t see Arch-Mage Traven for several days. When I was finally able to speak with him he seemed incredibly distracted. Still, he told me I could at least run an errand for him while the Council worked on sorting out the Mannimacro predicament. He said he hadn’t heard anything from Jeanna Frasoric at the Bruma guildhall lately and simply asked that I check up on her for him. I rode into the frigid mountains of the north, taking my time and stopping at a few sites along the way. When the familiar sight of the snow topped city walls appeared on the horizon and I passed through the city gates I veered immediately towards the Bruma Mages Guild guildhall. 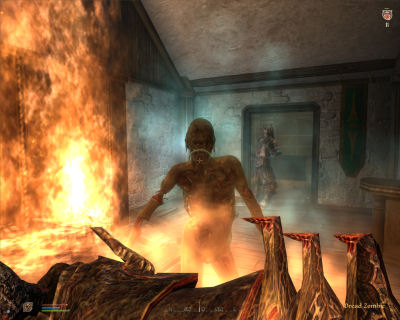 “Someone has been remodeling the Bruma guildhall…”

I swung open the front door of the guildhall to reveal an unexpected scene. There were bodies strewn about, pieces of furniture overturned, and books and scrolls littering the floors. Obviously there had been quite a commotion. As I carefully crept about the main room checking the bodies, most belonging to Mages Guild members, I was startled by the all too familiar sounds of a reanimated skeleton springing to awareness and heading my way. Undead! It had to be the work of The Order of the Black Worm! I effortlessly defeated the skeletons and continued investigating the guildhall, only this time with my sword at the ready. I found more of the same upstairs. In Jeanna’s office I received my official confirmation: a necromancer was searching through Jeanna’s desk. She turned towards me, snarled about not letting anyone leave, and began to attack. The fight was relatively short – I was able to blast the Imperial woman with a powerful fireball before she had time to summon any undead minions. From then on I had her in full retreat. 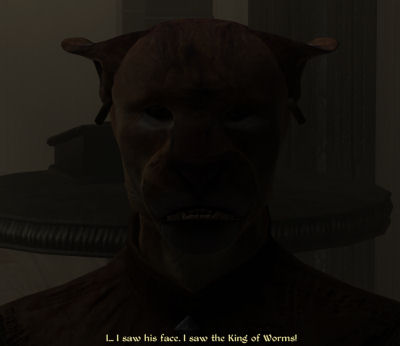 “I wonder if he got that nickname in college?”

Immediately after the fight was over I heard shifting behind me. I spun around to level my sword at the neck of a Khajiit magic user. It was J’skar, the mage I helped find when I received my recommendation from Jeanna. He told me that when the attack began he was able to turn himself invisible to escape detection. It was apparently an utter massacre with Mannimarco himself arriving to finish what his followers had started. J’skar even swore that The King of Worms saw through his invisibility but left him alone anyway, probably to relay the horrors of what had transpired to the Council. J’skar and I finished looking through the gutted and gore littered guildhall and rode double time together back to the University.

The Arch-Mage was quite shaken. It seemed that if he had any doubts about the rumor of Mannimarco’s return they were now put to rest. Again, he left almost immediately to convene with the Council of Mages. I spent the next few days going between my home on the Waterfront and the Market and Arena districts as well as attending to some neglected Fighter’s Guild correspondence. Finally Traven sent for me. 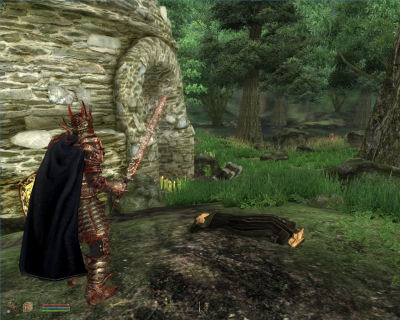 “A warm welcome to Fort Teleman.”

Arch-Mage Traven told me that the Council was in chaos after the news of Mannimarco’s attack on the Bruma guildhall. In the debate about how best to defeat the necromancer lord Irlav Jarol and some other mages took an artifact, the Bloodworm Helm, to a secluded location to attempt to research it for the purpose of perhaps using it to defeat the King of Worms. Likewise, amongst much dissent from the rest of the Council, Caranya took the Necromancer’s Amulet fearing that its presence in the capital presented a danger to the entire city. I was tasked with retrieving both items and bringing my colleagues back to the relative safety of the Imperial City. I restocked and set out to find Irlav Jarol in the ruins of Fort Teleman to the southeast in Blackwood. 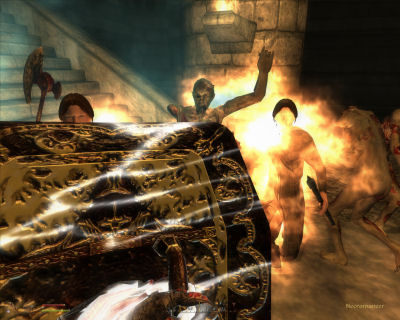 Inside the ruin I immediately encountered necromancers on guard. Due to way they were casually standing about I figured that they had been there awhile. That did not seem good for Irlav! Instead of taking any sort of cautious approach I ran straight into a vicious melee at every opportunity. Soon I reached the main chamber of the ruin only to find that I was too late – the mage had obviously attempted to guard himself with a series of powerful Daedric and elemental summons but the large Black Worm raiding party overwhelmed him and his minions. Fighting my way to his body I found the Bloodworm Helm still in his possession. Poor bastard! Poorer still, perhaps, was Caranya. Having found what I came for and cleared the entire ruin of necromancers, I immediately set out for the Fort Ontus ruin, southwest of Chorrol, fully expecting to find another the remnants of another massacre. 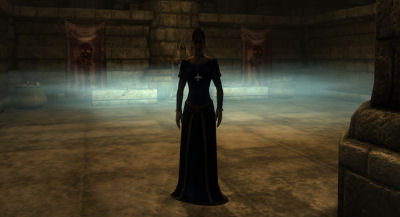 “Finally, a friendly greeting! Not sure what all of that necromancer stuff in the background is, but whatever…”

Days later I reached Fort Ontus, where Councilwoman Caranya and her group of loyalists had barricaded themselves with the Necromancer’s Amulet. I was able to sneak into the old ruin quite easily and crept up to my first target as quietly as a Khajiit assassin. I drew my Daedric blade in my right hand and let the lightning begin to crackle in my left, only to notice that the Altmer woman was in fact a guild mage, not a necromancer! I’d almost committed a grave error. I stepped out of the shadows and introduced myself. The mage was a little surprised but pleasantly directly me to where I could find Caranya all the same. 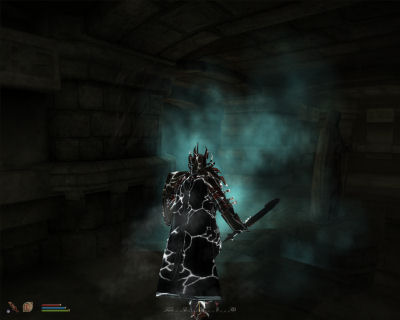 Assuming that I was there to join her group, Caranya was very pleased to see me and greeted me with open arms. When I told her that I was here for the artifact at the Arch-Mage’s orders, however, her demeanor shifted. Rage burned in her eyes and she screamed out that she does not answer to Arch-Mage Traven, only Mannimarco. I admit I was a little confounded but after the first flame spear shot over my shoulder I came to my senses and found myself in a pitch battle with the powerful mage. Unfortunately for Caranya, my prowess as a battlemage had reached a point where I could very well have found myself on the Council of Mages alongside her. Her attacks that I could not dodge I blocked with my shield all while slowly gaining ground on her until I could have at her with my blade. In the end she lay dead and the Necromancer’s Amulet was mine. I had to move quickly at that point as it appeared as if Caranya’s followers were also in league with the King of Worms and they were in too great of numbers here to face alone. I had to face a few as I made my hasty exit but soon I was back on my horse and Arcane University bound.