For a time I focused on my duties as the new Arch-Mage of the Mages Guild. Despite not having much in the way of any real interest in the position and being all too wary of the growing renown that would be involved in fully assuming it, there was much to be done. The Council of Mages needed to be reformed, chiefly. Without a solid council in place it would be impossible for me to govern on my own. At least with the council back to normal the guild would distract themselves and the focus could be directed off of me and onto other matters. Besides that, I spent a great deal of this time taking advantage of the great library at the Arcane University. My studies became more consuming than since early on after escaping from the prison so many months before, both in hopes of regaining some additional morsels of understanding of my past and for an invigorated love of academia. Growing too aware of my increasingly sedentary nature I decided to pack up my traveling kit and set out on the road, if only for a short time.

This was no grand adventure. While there were, of course, encounters with the random beasts and creatures along the way and a notable increase in bandit activity in some areas, I had actually assigned myself the rather mundane but necessary task of journeying from city to city visiting Fighters Guild guildhalls and senior members. In particular I was long overdue to meet with Modryn Oreyn in Chorrol, who had more or less been running the guild as my proxy since I first became the Guildmaster. It was on this journey that I stumbled into an unusual, even palpable tension over a recent event in Anvil. A terrible event. 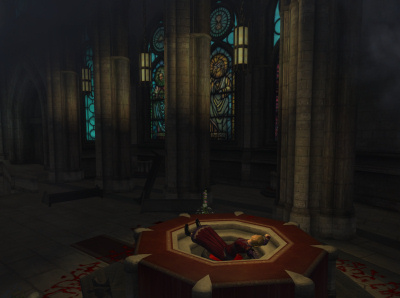 “Looks like someone’s got a case of the Sundays!”

Everyone in the streets had been gossiping about the horrific attack in the Chapel of Dibella is in Anvil’s Chapelgate district. Given my station as both Arch-Mage of the Mage’s Guild and Guildmaster of the Fighter’s Guild the City Watch let me have access to the scene. In the chapel I found everything overturned and bloody corpses of both priests and worshipers alike strewn about. Most curiously there were runes written in blood around the altar. I recognized the runic writing as Old Ayleid but couldn’t read it for myself. Although I explored the rest of the chapel there were few other clues to suggest what had happened there. The guards around the chapel wouldn’t share any information about who they had suspected of committing this desecration or why and I sensed no real hints that they might be purposely withholding more from me. Also not withholding was a strange, raggedy man I found preaching outside of the chapel steps as I left. 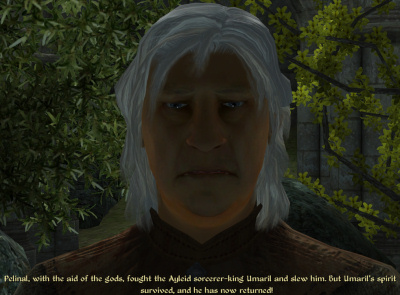 “Fuck! Doesn’t anyone evil STAY dead in The Elder Scrolls?!”

At first glance the preacher seemed to be your run of the mill deranged homeless man but as I watched it seemed that he was gathering an audience. He was ranting passionately about something named Umaril coming back to seek vengeance on the Nine Divines and Cyrodiil needing a new champion. I had heard the name Umaril before but couldn’t quite place it so, on a whim, I decided to speak to this street preacher one on one after he stopped for a break and the crowd dispersed. The man was a little more coherent when not ranting and told me the tale of Umaril the Blasphemer, an ancient Alyeid king who, backed by the Daedra, ruled over the lands with a terrible power and cruelty. Eventually a powerful, zealous warrior and holy champion of the Divines, Pelinal Whitestrake, rose up to challenge his reign and slew him in an epic battle on top of what is now the White Gold Tower in the center of the Imperial City. This preacher claims that Umaril, actually made immortal by his pact with the Daedra, was now back from the Outer Realms of Oblivion and a new champion would need to rise up to defeat Umaril in the name of the Nine.

It was an interesting conversation, no doubt, and after hearing his story I recalled reading of Pelinal Whitestrake in the past. While at a tavern later that day the subject of the preacher, who most seem to dub more cordially “the Prophet” came up amongst my fellow patrons and it seemed, interestingly, many seem to hold in high regard. After finishing my meal I returned to the Prophet to learn more. First he spoke about the grand quest of recovering Whitestake’s lost relics. He then told me that if I was interested in learning more about following in Whitestrake’s footsteps and becoming the champion I should first go on a pilgrimage to pray at the wayshrines of the Nine Divines spread across Cyrodiil. While I’ve learned a lot much more about the divine Aedra and indeed their Daedric counterparts since becoming a free man I’ve yet to commit to worshiping any sort of gods or practicing any particular faith. My own work on Daedric conjuration puts me at some odds with worshipers of the Nine though, like most conjurers, I do not worship the Daedric princes. Indeed, I must have been an odd site clad in my Daedric armor and weaponry. The Prophet seemed unphased. 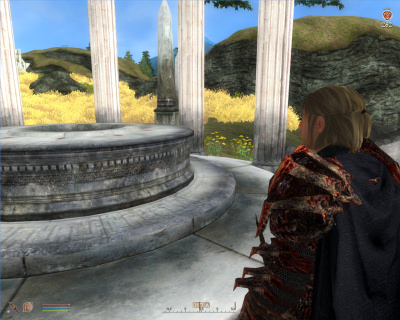 I couldn’t shake it. The feeling that this was a quest I must take up. Was this something from my past rising up to the surface or just some sense of duty that has appeared along with my growing responsibility for the people of Cyrodiil? I did not know. I slept on it that night and in the morning I immediately set out for the nearest wayshrine I knew of. A shrine dedicated to Mother Mara, just north of the city. I continued onward, zigzagging across much of Western Cyrodiil for days, visiting shrines all around Anvil, Kvatch, Skingrad, and Bravil. Many of these wayshrines I had recalled coming across before whilst producing my maps though sometimes I ended up asking locals for directions. Often times this wasn’t too difficult as wayshrine pilgrimages sometimes brought other travelers out to these often secluded sites as well. At one such occasion I even encountered a fellow warrior, Sir Roderic, seeking to become a crusader of The Nine. He spoke of the prophet’s wisdom and asked me to travel with him and his squire but as we were heading separate directions I declined. 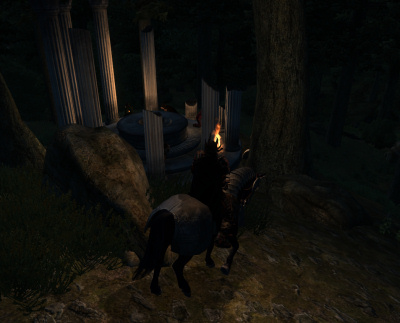 “Damn Pagans must be living on No-Doz!”

While my voyage was mostly uneventful, some of these shrines were so secluded encounters with roaming monsters were to be expected. I suppose the devote might look upon these dangers as trials of faith but for me they were of little consequence. Indeed my mood grew more and more bleak as I progressed on my quest. At first I took in the beautiful scenery in these secluded areas of the realm but in time the blue skies turned to darkness and rain and the friendly pilgrims were replaced by vicious, brutal minotaurs and gargoyles lurking in the shadows of the forests. Despite this I was oddly possessed with completing my pilgrimage. I couldn’t stop until all 9 of the Divines had been honored. After the last shrine had finally been reached I rode south to Skingrad and setup in an Inn for the night, feeling empty and questioning the wisdom of ever deciding to take up the quest. 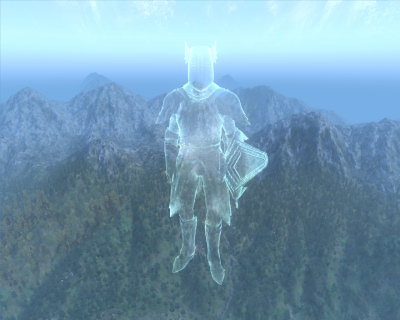 That night I had the oddest of dreams. I was floating high above the White Gold Tower and the visage of none other than Pelinal Whitestrake himself approached me. He spoke as a spirit, with only vague recollections of his former life and vaguer of events that had come after. He guessed the gods had arranged for us to meet because of Umaril’s return. He spoke about the quest to seek out his relics, though had little to say, he did offer that his relics could possibly be at the site of a shrine erected to him shortly after his death on its very site. His description of the site, though somewhat ambiguous, sounded like it would be relatively easy to locate if it was still accessible. Likely a ruin now, and likely lost to time under the waters of Niben Bay, but there was a chance.

I woke from my restless slumber unsure of whether it was truly a dream or perhaps a true vision. Had the spirit of Whitestrake reached out to me? I didn’t know but I was sure I could find out. I quickly gathered myself and rode with great haste to the shores south of the capital.

I bet you guys thought I gave up on old Garn didn’t I? Well, to the two people who were asking… nope! We are definitely, finally nearing the end of his adventure though.