The entirety of the order of the Knights of the Nine met outside of the ruins of an old Alyeid stronghold called Garlas Malatar off of the Gold Coast. The Prophet believed this was where we’d find Umaril the Blasphemer and from the scouting report Sir Brellin brought us back he was correct – Aurorans were seen guarding the entrance. 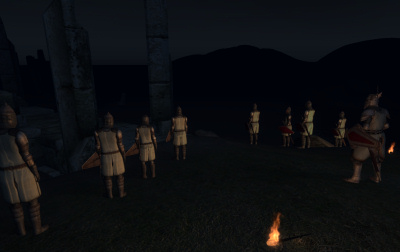 Once everyone was prepared I gave the call and we charged into the ruin. A few of the knights immediately took up positions to overwatch the melee with bow and arrow while the rest of us went for the guards by the entrance. The Aurorans were no easy match for my knights, most of them still relatively inexperienced, but with our superior numbers we won fights we might have otherwise lost. Inside the mostly intact lower levels of the Alyeid ruin we found yet more Aurorans. Easily more of them than I’d ever encountered at one time before then. Vicious fighting filled the corridors and chambers with the sounds of sword on steel echoing all around us. It didn’t take long before we realized that something was amiss – it seemed as if more and more Aurorans were appearing no matter how many we slew. 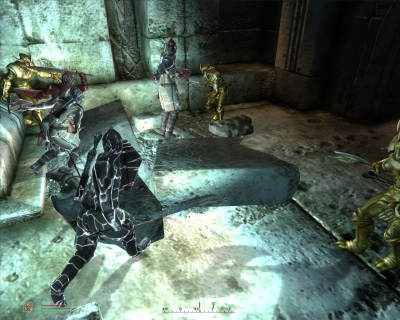 “Despite being electrocuted 57 times each the Knights prevail.”

When we reached further into the stronghold I spotted it – a strange glowing black sphere floating on a platform above us. There was no doubt in my mind that its magics were affecting us somehow, possibly by summoning these Daedra. While my brothers were engaged in a particularly thick fight, distracting all nearby Aurorans, I made my break to look for a way to access the orb. Soon I found a stairway to a higher level and found myself standing in front of the artifact. With all of my strength I struck down on it with the Sword of the Crusader, smashing the sphere into a thousand tiny black shards. As an energy waved burst outward a hidden staircase revealed itself, lowering into the floor in front of me. 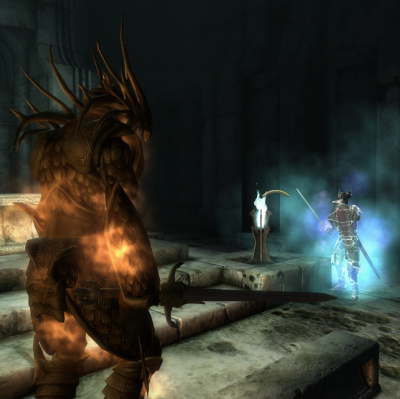 “Umaril and the Crusader face off.”

It was only a matter of moments more before I reached Umaril’s throne room. Perhaps recognizing Pelinal Whitestrake’s garb, or perhaps well aware that I was on my way all along, he drew a massive Elven longsword and wasted no time charging at me. In the rare instance while I was on the offensive most of my blows seemed to glance off of his ornate Alyeid armor and the rest of the time he was absolutely tireless with his vicious strikes against me. If I had been using anything but the blessed Shield of the Crusader it would have been hacked to pieces within seconds. Despite Umaril’s ceaseless assault I still found time to cast the occasional spell and quickly noted that lightening seemed particularly effective against him. I worked into a routine of dodging his blows, blocking them, and occasionally managing to push him back with a heavy shield slam, giving me a moment to hit him with a bolt of lightening before he lunged back towards me. Unable to adapt quickly enough he soon laid dead at my feet in a golden armored heap. 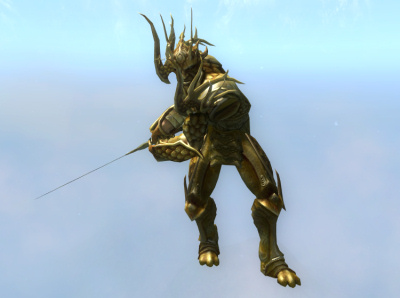 My battle was not done however. After taking a moment to my equipment and to cast a few healing spells on myself I invoked the Prophet’s Blessing of Talos and was almost instantaneously whisked away. My first thought was that this part of the Outer Realms looked much more like Tamriel than expected, then I looked down and realized that I was in the sky high above the Imperial City. I panicked and began to scramble madly for something to grab onto only to discover that I was somehow floating in place, in no danger of falling. Looking back up, a confused and very angry Umaril again raised his sword to charge me. Wasting no time I assailed him with a volley of powerful consecutive lightning blasts sending him tumbling off of his feet and falling downward towards the city below. In an instant I, too, was falling, and that was the last thing I remembered before waking up.

Upon stirring the spirit of Sir Amiel spoke to me. He said that his vows finally completed, he and his fellow spirits of the original Knights of the Nine to rest could now finally rest in peace. Thanking me and praising me as the new Crusader the ghosts vanished before me in wisps of fine white smoke. 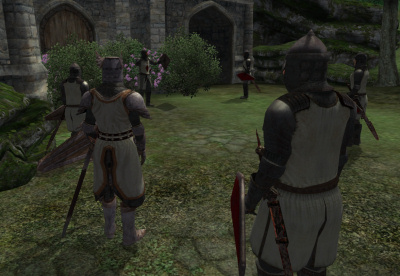 I dusted myself off and walked out of the crypt to be almost immediately intercepted by Sir Thedret, sword in hand, coming to investigate the voices he was hearing below. Overjoyed at seeing me alive he explained that after he and the rest of the knights had cleared out the last of the Aurorans they set out to track me down only to find my lifeless body laying beside Umaril’s in the Alyeid king’s throne room. Assuming I was dead they brought my body by dark of night to the order’s crypt to keep my passing secret from our enemies, and there I was, alive! Before I could get much of a word in edgewise he ran back upstairs to tell the others. As I slowly followed him out of the priory I found him giving a speech to the rest of the assembled Knights of the Nine in the courtyard.

Victorious in my battle against Umaril the Unfeathered I was greeted by the applause and cheers of the rest of my order. This was the moment I had been hoping for since escaping my damp cell in the Imperial Prison so long ago. I still didn’t know exactly who I had been yet I somehow knew then that whether I had been questing for the Crusader’s Relics in my previous life or if I had simply been destined to be a Knight of the Nine all along, I was in the right place. I also knew what my next quest would be. There was no more running, I needed to face up to the responsibility that I had been putting off for so long and do my part to restore order to the Empire. I needed to go to Weynon Priory.

Fun fact: I made all of the Knights of the Nine NPCs “essential” so they’d make it through the assault on Garlas Malatar to hopefully serve as useful companions later on. If I hadn’t the majority would have been slaughtered.