Almost immediately after beating and loving the first of the Mass Effect games I heard about a couple of others games that were purported to be attempting very similar things. The first was Obsidian’s Alpha Protocol. Apparently it was going to be Mass Effect meets a modern day spy thriller. How is that not amazing? Then there was Rise of the Argonauts which was Mass Effect set in ancient mythical Greece. Why not? I determined way back then that I’d be playing both of them. Period. While neither of these games turned out to wear that Mass Effect comparison quite so favorably, here I am… 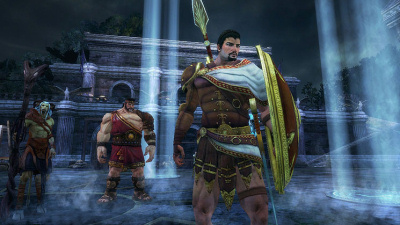 “On our way to slay Medusa despite the lack of Perseus.”

Rise of the Argonauts is an RPG that is very much influenced by the “post-KoTOR” era of BioWare games. I definitely get a Jade Empire vibe from it but again the comparisons to Mass Effect are hard to avoid as well, especially considering the game’s Unreal Engine roots. You play as King Jason of Iolcus on his legendary quest for the Golden Fleece. Now, don’t get ahead of me too much here. I’m sure a lot of you have read about the myth of Jason or at least seen the rad Ray Harryhausen effects laden movie from the 1960s. This game takes innumerable liberties with the legend and indeed others so don’t think you already know the plot. That said, if you get a kick out of Greek mythology like I do then you’ll definitely enjoy some of references here.

After your journey aboard the suspiciously steampunk Argo kicks off you’ll be going relatively freely from place to place completing main quest objectives, doing side questions, and recruiting new members for your crew. Sound familiar? Despite the little bit of freedom you’ll have, you’re directed fairly narrow through the main plot and the games wraps up relatively quickly, which for me isn’t really a complaint – the length and the pace felt quite acceptable. You spend a surprising amount of time interacting with NPCs with a very Mass Effect like dialog system. Combat feels almost entirely separate from the conversations and even the exploration as it usually involves sections of the maps being cordoned off into little arenas with multiple waves of enemies that need to be defeated before moving on. There’s relatively little of it too, which isn’t such a bad thing since I never really got into the combat system. 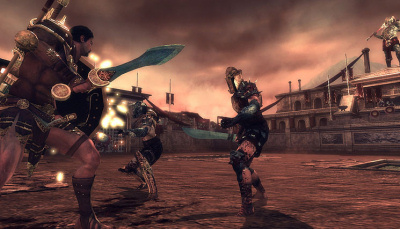 The combat isn’t terrible, mediocre perhaps, but it just never “clicked” with me – whether an enemy blocked or dodged my blows, what weapons and attacks worked best for what situations, etc. just always felt fairly random and arbitrary to me. It wasn’t until one of my weapon/skill trees got nearly fully upgraded that combat became so easy I could simply stop feigning concern and do what felt the most cheaply effective. Even then, I didn’t care much for using many of the “active” special skills or powers as they took way too long to recharge and while boss fights could be challenging, the fodder wasn’t ever really worth wasting time using powers on. 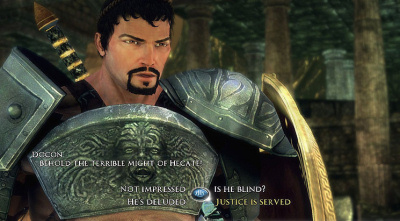 “You’ll be seeing our protagonist from this angle *a lot* throughout the game.”

That said, there are some high notes as well. Although the dialog system didn’t seem to produce any decisions of consequence I felt like it was mostly well written and acted and Jason, while a little dry, is a fairly likable character, at least the way I played him as a devotee to Athena. Oh, and about that! I also liked the upgrade system, which had you earn “deeds” for meeting various goals, whether they be completing quests or more “achievement” like goals such as slaying 15 enemy mercenaries. You then chose which of four Greek gods you wanted to dedicate the deed too, essentially giving you XP to spend in that god’s particular skill tree. The dialog system incorporates this as well, with choices often differentiating between associating with each of the four gods rather than the more black and white, good savoir of humanity vs. evil dickhead choices RPGs usually give you.

Oh, I should also mention that a lot of the the videos and user reviews and whatnot I found online mentioned bugs and performance issues. Perhaps it helped that I had it installed on my 360’s hard drive and maybe its been patched since then too but I encountered relatively view bugs with the game and nothing I’d consider major. 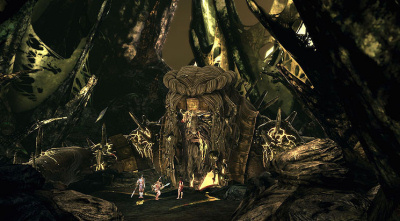 “A meeting with Prometheus.”

Sticking with the technical stuff, graphically the game is quite a mixed bag. It left me a sour first impression with some extremely ugly pre-rendered (from the engine… why?) cut-scenes and some beyond awful animations. Once things got going for real though I started to admire some of the character models and designs as a whole. They’re not all good – the generic human NPCs found on Iolcus, for instance, are utterly fucking hideous, but some of the main characters such as Jason himself, are rather nice. Animations never get too much better but thankfully most of the other cut-scenes are kept in-engine so aren’t quite as jarring. Finally, the environments are, all in all, rather beautiful. There’s a lot of variety in color palettes and themes without feeling too contrived. I was especially impressed with my encounter with the Titan Prometheus down in… well, I don’t want to spoil it. Finally, the soundtrack is rather good for a game seemingly no one knows about and indeed a quick search resulted in a lot of people raving over it.

In summary, if you love BioWare style RPGs and Greek mythology and don’t mind going into it without huge expectations I’d certainly recommend Rise of the Argonauts. It’s a relatively short romp (for this type of game, at least) so I certainly don’t regret my time with it but I do have to admit that more than loving the game, it has me really wanting to play an actual BioWare game again ASAP.

As usual with Xbox 360 games these screenshots were stolen mercilessly, as is the way of Aries! I stole these ones, which are probably from the slightly better looking PC version, from http://www.computerbild.de. Danke!