Finally arriving back at Cloud Ruler Temple I found Jauffre and Martin along with Baurus and a few other senior Blades gathered in the great hall. It seemed that I had interrupted a tense discussion which they were quick to invite me into. Martin, it seemed, had hatched yet another plan. The final reagent needed for the dark ritual that would help create a portal to Mankar Camoran’s paradise had been learned – a great sigil stone. Unlike the sigil stones I’d been using to close the Oblivion portals up till then, a great sigil stone could only be found in great siege portals like the one reportedly used to destroy Kvatch. I hadn’t encountered one of those yet but from the information we acquired from the Mythic Dawn’s spies we knew that they were plotting to bring one to Bruma. 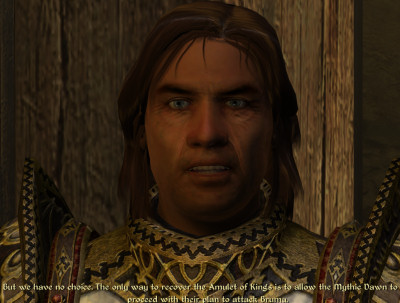 “Good for us, not so good for Bruma.”

That was Martin’s plan, it turned out. We needed to stop closing all of Oblivion gates around Bruma allowing them to create a combined passage between our worlds large enough for a great Oblivion gate to open. The Blades were not extremely happy with this plan. More troubling still, Martin demanded to lead the defense against the invading Daedra himself. There was no talking him out of it, nor were there any other plans on the table, and so we made the short ride down to Bruma to share Martin’s plan with the Countess. 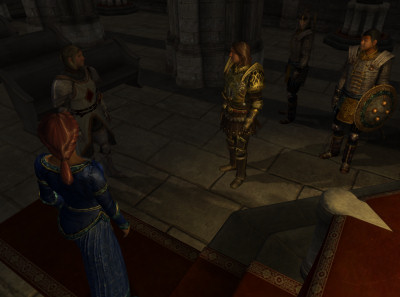 “Martin and I attempt to convince Bruma’s Countess to let us destroy her city.”

Meeting us at the Chapel of Talos, Countess Narina Carvain was not so pleased with the plan either. If we failed to hold back the Daedra swarming through the gates, or worse yet, we failed to close the great gate before it could begin its siege of the city, Bruma would take significant losses if not be utterly destroyed. Quite a gamble, but the Countess guessed Martin’s identity quickly enough. Bruma had a long history of working with the Blades of Cloud Ruler Temple and she deduced that he must be the new emperor. She also knew me from my work for Bruma in the past as well as my reputation as the leader of the Fighters and Mages guilds and my victories as the Divine Crusader since. Of course she also knew of no other, better plans to end the Oblivion Crisis and quickly made her decision. She was completely behind us.

As we left the chapel a great crowd of citizens, refugees, and reinforcements from other cities had gathered around the chapel. The Countess silenced the rabble and made a brief speech, announcing that we were at the beginning of a new era, the end of the Oblivion Crisis, and the start of the reign of Martin Septim. The crowd exploded, chanting Martin’s name as we continued to the city gates.

Outside of the city the majority of the Blades, a large portion of Bruma’s guardsmen, and the reinforcements sent from other cities, the guilds, and knights and warriors from all over Cyrodiil gathered and prepared for battle. Martin made an impressive speech, rousing the combined force and underscoring the significance of the moment. This could be the pivotal turning point in which the empire, and indeed the rest of Tamriel, would be saved from the enslavement of Mehrunes Dagon. 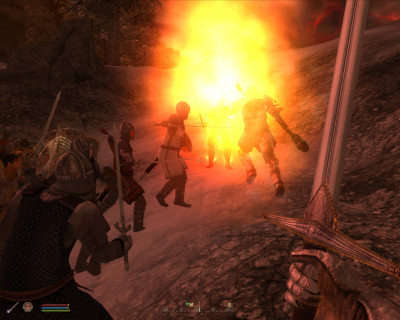 “Martin Septim takes a fireball directly on the chin. Ouch.”

A new Oblivion gate appeared nearby and in an instant the battle was on, as swords were drawn and bows were raised. All manner of Daedric soldiers, creatures, and constructs started to trickle through and immediately sought to break our lines. A massive fireball flew from a powerful Xivilai mage and landed almost dead on Martin. I was quick to shield and heal him with my restoration magic but it was a close call that did little for our force’s morale. Soon a second gate appeared, and then a third. The battle was utter chaos, with many guardsmen falling all around us. The line was being held for the time, however.

That was about the time the great gate appeared. As wide as a city wall and taller still, the great gate dwarfed the horizon. Many of us stopped and stared in awe at the fearsome sight, temporarily forgetting that we were fighting for our lives. I was snapped out of the moment by Martin, frantically yelling over the clash of battle to tell me to get to the gate. I had no time to waste, I had to find the great sigil stone before the great gate spilled it contents onto Bruma. 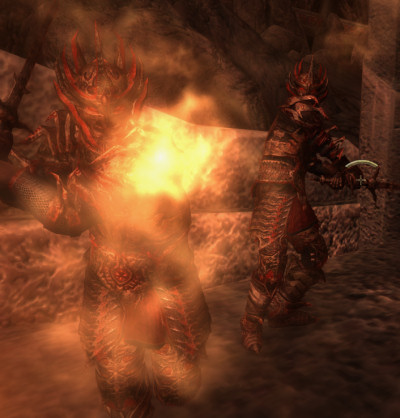 “Dremora doing their part to slow my progress to the top of the tower.”

Raising my shield and charging my way past a unit of heavily armored Dremora soldiers I entered the gate. I arrived on the other side to find myself facing a siege engine armed with a massive cannon the likes of which the most talented machinists and mages in our world had never dreamed to construct. These engines could raise Bruma’s walls effortlessly and I was sure they could just as easily continue onward to the Imperial City. As the machine slowly lumbered forward towards the portal I darted to one side of it to look for a way into the sigil tower. After a brief climb I snuck up behind an unsuspecting Dremora patrol, blasting one of them with an electric bolt and running another through with my longsword. 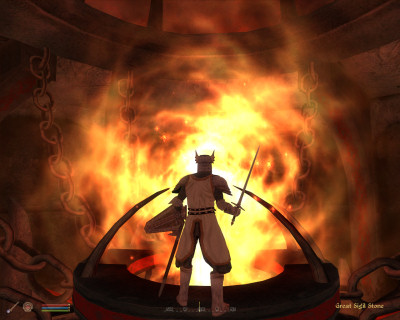 Inside the sigil tower I found a similar arrangement as other Oblivion portals and began my ascent. While this tower seemed more heavily guarded than most, and many of the guards seemed to be better fighters than most of the Demora I’d encountered previously, my urgency and aggression caught many of them unprepared and soon I found myself standing in front of the great sigil stone. With a huge heave I pushed the stone from its pedestal and was instantly blown back by the resulting explosion. 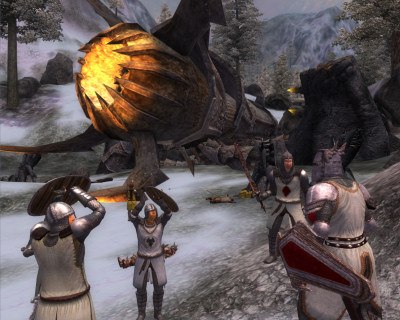 “Aftermath of The Battle of Bruma.”

I awoke to two Bruma guards pulling me to my feet, dusting me off and checking for wounds. I was back on the snowy fields outside of Bruma. I was alive. The less fortunate lay strewn all around us in such quantity that it was hard to make out which side came out worse. The great siege engine I had dodged as it lumbered towards to portal had evidently made it only partially through, with the front half of the huge construct resting in our world, the rest seemed to have been sheared clean off when the great gate suddenly closed. While I couldn’t locate Jauffre or Baurus, Martin came running over to greet me. There was no time to count our losses, we had to get the Amulet of Kings and stop this invasion once and for all.