This post represents the introduction to a long series of gaming logs which will chronicle my own personal Halo Fest 2020! That is, in anticipation of the launch of Halo Infinite, I’ll be playing through almost every single one of the Halo games as well as checking out some other, miscellaneous Halo media along the way.

I’ve been into Halo since around the launch of the first game in 2001 but I’ve only played through most of the single player campaigns a single time which should make going back through them all fairly entertaining. There are also some I haven’t played yet, most notably Halo 5 and the Halo Wars games, so I’m really looking forward to those. Going back through old gaming logs, I really haven’t talked much about any of the Halo games all that much, and my coverage of the few I did write about here was a little anemic. While these won’t be full on reviews, this will at least give me the opportunity to go into a little more detail about all of them. 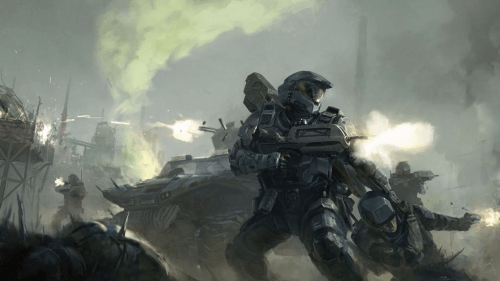 “Back into the fight!”

Of course, this effort will surely take me longer than the next 4 months, though with Halo Infinite recently being delayed some indeterminate amount of time, it should still work out, though perhaps I shouldn’t have put the year in the title. Also, I thought about doing these playthroughs chronologically in the order the story actually unfolds, but the technological leaps back and forth between the games seemed like it might be a little too jarring. Instead, I’ve opted to simply play them in original release order, which means we’re starting from the beginning with the legendary Halo: Combat Evolved.

My next gaming blog entry should be following shortly!

This awesome concept art by Kai Lim is actually from the cancelled fan film Operation Chastity.