The Story So Far: Taking blame for the loss of Halo Installation 04, an Elite commander is tried for heresy. He’s given the opportunity to become the Arbiter, a position that serves at the Covenant leadership’s behest to embark on special, typically suicidal missions in order to atone for his failures. The Arbiter is then dispatched to recover 343 Guilty Spark. Meanwhile, a small Covenant fleet led by one of the Covenant leaders, the Prophet of Regret, arrives near Earth. During the ensuing battle, Regret’s ship gets through Earth’s defenses and begins to assault the city of New Mombasa. As the battle turns, Regret retreats, making a slipspace jump right above the city. The UNSC frigate that Master Chief and Cortana are on manages to jump along with them, arriving at another Halo installation. Master Chief and the small UNSC force with him head to the surface to prevent this new Halo from being activated and the Master Chief manages to kill the Prophet of Regret. The main Covenant fleet jumps in and the Arbiter is dispatched to intervene. While successful in stopping the humans, the Arbiter is then betrayed by Tartarus, the commander of the Brutes, as they assume the Elite’s power within the Covenant. As a civil war between the Brutes and the Elites breaks out, both the Master Chief and the Arbiter find themselves held captive by an intelligent Flood creature called the Gravemind. The Gravemind reveals to the Arbiter that he’s been lied to and then sends them both to stop the activation of the Halo installation; Master Chief to the Covenant’s mobile capital city High Charity and the Arbiter to stop Tartarus on the Halo installation. The Arbiter, teaming up with some of the remaining UNSC forces, succeeds in stopping Tartarus though, interrupting the activation already in progress, a failsafe system engages, threatening to remotely activate all of the remaining Halos. As the Flood begin to overrun High Charity, Master Chief tracks the last of the Covenant leaders, the Prophet of Truth, to an ancient Forerunner dreadnought in the city. The Master Chief manages to hitch a ride just as the ship takes off and jumps to Earth while Cortana remains behind to finish dealing with the Halo installation, and inadvertently, the Gravemind.

Unlike Halo 2, I was actually anticipating the release of Halo 3. As mentioned in my last post, I was actively working on finishing off the original Xbox games on my backlog before finally migrating to the Xbox 360, and I capped off the effort by purposely lining up another playthrough of Halo: CE and my first real playthrough of Halo 2 with the release of Halo 3. This felt like the perfect transition from one generation to the next and I certainly wasn’t disappointed with the last installment of the trilogy. Probably more significantly, Halo 3 also became a highly social game between me and a few different groups of friends which continued on to some degree through the life of Halo: Reach. So many Xbox Live Slayer matches, innumerable in-person get-togethers for couch matches, custom game types and house rules, custom maps via Forge, coop over Live, etc. Halo 3’s multiplayer was for me, I suppose, what Halo 2’s was for so many Halo fans, and I look back on those times quite fondly. 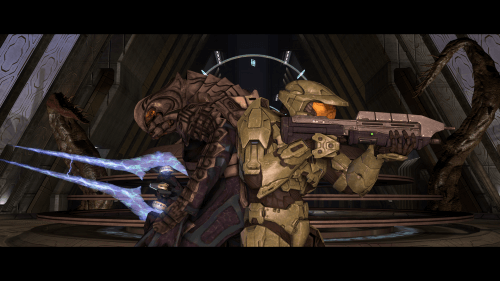 “Master Chief and the Arbiter, back together again!”

So, playing the campaign for only the second time, I once again relied on the Master Chief Collection for Xbox One. This time I played it on my new Series X, which on my 1080p TV, only really benefits me in Halo 3 by way of quicker loading times. In any case, I mentioned last time that I was worried about playing this game right after playing the beautifully remastered version of Halo 2, but I’m glad to report that I have zero regrets. Despite lacking the extra layer of graphical flourish that Halo 2 Anniversary brought, Halo 3 still looks absolutely gorgeous today. Its only major shortcomings come down to some fairly hideous human faces and some jerky character animation during cutscenes, neither of which are an issue for the vast majority of the game.

As far as the game itself goes, I don’t know if it was actually a stated design goal for Halo 3, but if Halo 2 was “quite a different animal than the original Halo: Combat Evolved” (as I said in my Halo 2 post) than Halo 3 seemed to make purposeful efforts to find a middle ground between the two games, taking a lot of the best additions and changes brought by Halo 2 and smoothing over the rough edges just a bit, often taking a half step back towards Halo: CE. It’s not incredibly easy to summarize, but it feels blatant to me when playing the three games back to back like this. 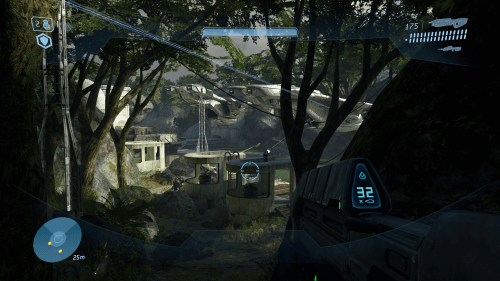 “Ahhh, my beloved AR. Fits like an old glove!”

Any weapon I had complaints about in Halo 2 feel much improved for one. The shotgun, being one I explicitly mentioned last time, is a perfect example of a “half step back” Halo 3 takes – while the rate of fire is still lower than Halo: CE’s shotgun, it definitely feels faster than Halo 2’s, and its range feels a lot closer to Halo: CE’s as well. Additionally, dual wielding no longer comes off like a gimmick that Bungie really wants you to test out, but just a handy thing you can do when it feels advantageous to do so. Oh, and the damn assault rifle is back! Melee feels reasonably powerful again too! Hoo-fucking-ray! While vehicle damage is largely unchanged, vehicles do at least seem a bit more resilient this time around – no more hopping into a vehicle to have it shot to pieces all around you within seconds.

Of course Bungie added some new things as well. Halo 2’s selection of weapons is further expanded with more Brute weapons such as the Mauler, the Spiker, the Spike Grenade, and the Gravity Hammer, and there’s some other goodies like the legendary Spartan Laser. There’s also the lovely addition of being able to pull mounted guns from their mounts and lug them with you which can’t go without mention despite being more cool than actually useful most times. Of course we get several new vehicles as well, like the UNSC’s Mongoose ATV and Hornet aircraft. Halo 3 also adds the concept of deployable equipment to go alongside the previously available power-ups. The relatively long list of these includes things like Bubble Shields, Power Drains, Trip Mines, and Gravity Lifts that you can toss out with various effects. These were pretty damn divisive (but pretty damn fun) when it came to multiplayer, but in terms of single player, while they can mix up encounters in some very cool ways, they always felt a little underwhelming to me. Having such a variety of equipment but only being able to hold one at a time meant certain effects couldn’t necessarily be relied upon, which in turned caused me to use them a lot less than I probably should have. 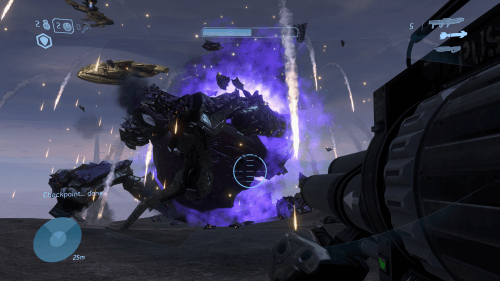 “You’d better get used to blowing up Scarabs.”

Level design was another area of improvement though. Both Halo 3’s open and more linear sections felt more open and more filled with possibilities than Halo 2’s. The pacing, both moment to moment and level to level, felt a lot more even to me as well. You could perhaps argue that Halo 3’s campaign was less “epic” than Halo 2’s, where each level felt more like its own interesting set piece. Hell, not counting the Scarab sections, Halo 3 didn’t even have any real “boss” battles to speak of, save for the very end of the game. You also don’t play as the Arbiter (though he’s often fighting alongside you, available for a second player to jump into when playing cooperatively) which loses that additional perspective on events in the story. Still, while Halo 2 might have had more big, memorable moments, Halo 3 was so much more playable and, well, fun. That extends to difficulty too. Playing through the campaign on “Heroic” again, this time I barely suffered for my choice – gone were the ridiculously bullet sponginess of the Brutes, the overabundance of enemies (except for when it made thematic sense, like in the level “Cortana”) and many of the cheaper feeling, frustration fueling deaths. 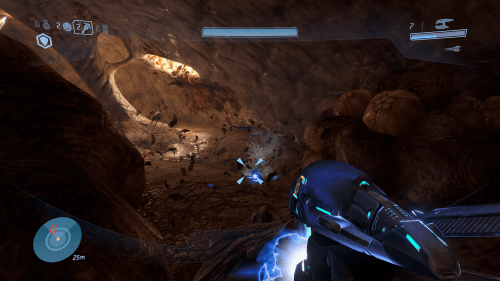 I’ll sum up Halo 3’s story when I post about Halo 4, but I did want to talk about an underappreciated character real quick: the Gravemind. In Halo: CE when we were originally introduced to the Flood they seemed to be little more than parasites and the mindless zombies they produced. Sure, there was obviously some sort of rudimentary (perhaps hive) intelligence there, but what we got in Halo 2 with the Gravemind was so much more sinister. Whether you realized it or not at the time, throughout the plots of both Halo 2 and Halo 3, the Gravemind successfully manipulated so much of what was occurring. For instance, in Halo 2, while it’s not explicitly explained, it seems clear that it had assumed control of Halo Installation 05 after capturing its caretaker AI, then it was able to capture the In Amber Clad specifically to spread itself to (and take over) High Charity. It then captured and interrogated Cortana, all but completely corrupting her programming and turning her, which surely led to much of what the Flood was able to accomplish in Halo 3. I liked fighting the Flood much more in Halo 3, actually – the new “pure form” was pretty damn cool, for one. 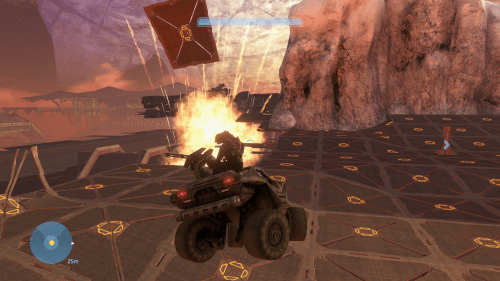 In so many respects Halo 3 feels like an attempt to make the sequel that some fans of Combat Evolved (like yours truly) wanted but didn’t quite get with Halo 2. Beyond all of the gameplay shifts back towards Halo: CE I mentioned above, there are even more, like how much more time was spent fighting on Earth this time around, addressing a complaint I and others had around Halo 2’s campaign, and how much more active and chattier your UNSC marine companions are. Then there’s all of the Easter eggs and intentional references to the previous games Halo 3 makes, like re-delivered lines and rehashed levels; Hell, the game ends with another (much improved) Warthog run sequence ala Halo: CE. As a fan of the first Halo, of course this all feels like an improvement to me, but more importantly, it was all just so goddamn fun to play through again. It’s the first one of these that, even before finishing, I felt compelled to play more of. Somehow I didn’t have that many fond memories of Halo 3’s campaign going into this, but man, I really loved it this time. Throw in all of the additional multiplayer features and things like Forge and Theater, and this is easily one of the best games in the series, and one of my favorites. 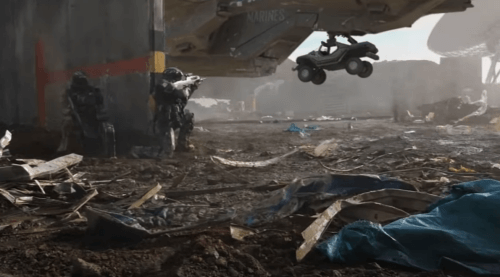 As an aside, Halo 3 also marks the start of live-action Halo content with what is known as Halo: Landfall as well as these Believe ad campaign shorts. Landfall is made up of three parts that show us some UNSC marines fighting Covenant forces on earth while attempting to locate Master Chief, while Believe shows brief interviews with veteran of those same battles recounting their experiences. While neat, they’re hardly essential, but as I plan on covering some other official Halo related video productions when we get to them, I thought it these were a worthy footnote.

All screenshots by me!? Thanks to the Xbox Series X controller’s new share button I’m finally able to easily grab good screenshots from my Xbox. Fuck yes! I’ve been bitching about this forever.